Goddess Durga is the main deity of this temple, who is an incarnation of Goddess Parvathi. Here deity is facing in East direction and sculpture with multi-armed slaying the buffalo demon. 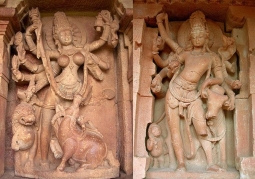 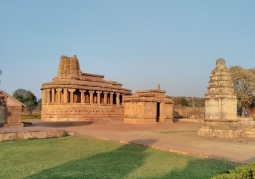 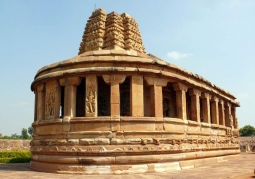 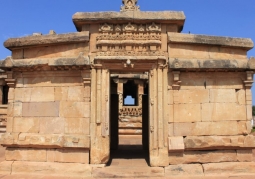 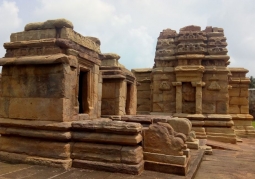 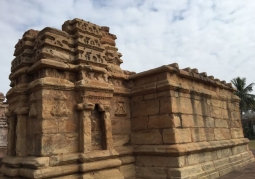 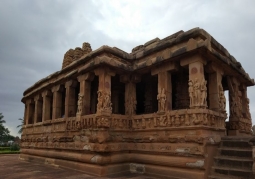 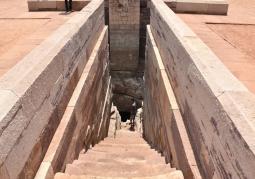 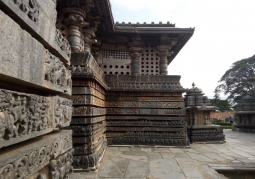 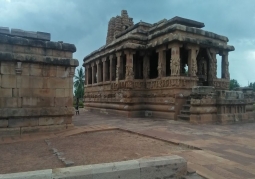 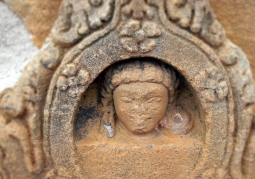 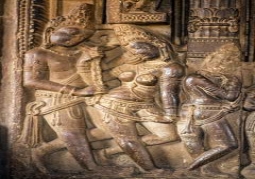 Goddess Durga is the main deity of this temple, who is an incarnation of Goddess Parvathi. Here deity is facing in East direction and sculpture with multi-armed slaying the buffalo demon.

Aihole Durga Devi Temple is facing in East direction which exhibits a blend of Dravidian and Nagara architectural style.The temples carry rich architectural sculpture on pillars and ceilings, especially depictions of such major gods as Vishnu, Shiva, and Brahma. Grabha Gudi contains Rekhanagara type shikhara an incomplete tower perches on the roof above the sanctum and the Shikhara seems to be inspired from North Indian temple. The temple has Mukha Mantapa and Sabha Mantapa. The temple is constructed with Red stone of Badami. The temple consists of an apsidal garbhagriha, sabhamandapa, a mandapa and a mukhamandapa in east-west axis and the temple opens to the east. The temple has a base of six different moldings. The temple is entered through two flights of steps to the south and north of the mandapa. On the basement are square pillars all the way through the construction including the apsidal garbhagriha.

The rows of pillars contains two pradakshinapathas, which is an exceptional architectural feature. The longish sabhamandapa has been divided into three portions by its pillars. The large number of pillars in this temple have been utilized by the artists to carve a large number puranic stories and self-supporting sculptures. These sculptures are of high order and add refinement and charisma to this temple. On the pillars of the mukhamandapa are found passionate couples in various suggestive poses. On another pillar is found Shiva dancing on apasmara. The inner wall of the mukhamandapa has Ramayana panel, Ardhanarisvara and Ugranarasimha killing Hiranyakashipu. The front entrance of the mandapa is well carved with dvarapalas, Yamuna and Ganga, and further sculptures.
Unfortunately, there are no inscriptions to date this temple. Derived from stylistic evidence, various dates have been assigned to this temple. While many scholars consider 600 C.E. as the date of this temple, some others assign it to seventh century C.E

Lord Parasuram, after avenging the death of his father came down to the river Malaprabha and washed his blood-stained hands and battle axe. The blood and gore on the axe turned the river red. A woman saw this and screamed ‘Ayyo Hole’ or ‘Oh No Blood!’ in Kannada, hence the name Aihole.

Once, a severe drought hit this place. The great Sage Jabaali used his 'Jnana Drishti' and found out that demon Arunasura had made the people stop all yajnas as revenge against the 'devas.' Demon Arunasura acquired a boon from Lord Brahma that he would not suffer death from any two-legged or four-legged being or any weapon. After gaining these powers, Arunasura conquered heaven. The Devas prayed Goddess Durga for help.Goddess appeared as a beautiful woman. Arunasura approached her. She reminded him that she had killed Shambasura and from whom Arunasura had escaped death. Arunasura got angry and tried to kill the Goddess with a sword. The Goddess turned into the stone. When Arunasura slashed the stone with the sword, a vast swarm of bees emerged from the stone and stung him.

This temple was built between the 7th – 8th centuries by the Chalukyas.

The temple is dated to the 6th or 7th century CE