Ambreshwar is the main deity of this temple, who is an incarnation of Lord Shiva. Here deity is in form of Shiva Linga and is Swayambhu. 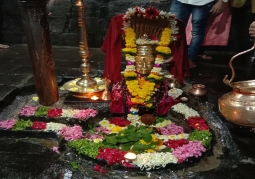 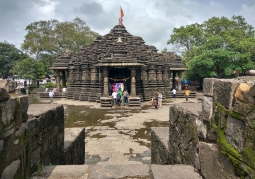 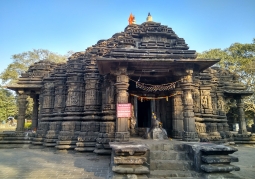 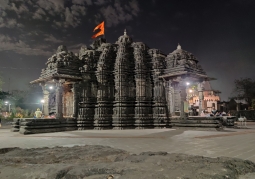 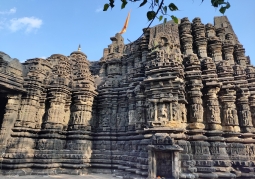 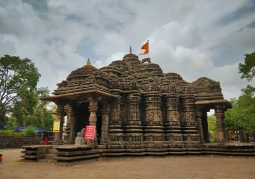 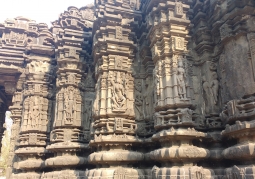 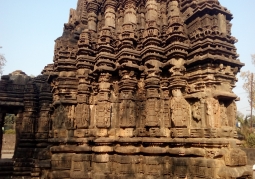 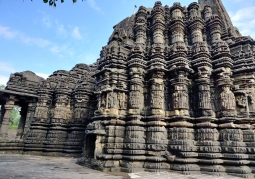 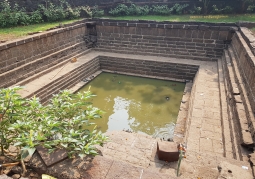 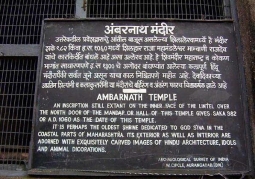 Ambreshwar is the main deity of this temple, who is an incarnation of Lord Shiva. Here deity is in form of Shiva Linga and is Swayambhu.

The temple is carved out of stone in Hemadpanthi architectural style of construction and is known for its resemblance with the famous Dilwara Temples of Mount Abu in Rajasthan. The temple is built with black basalt stone. The main attraction of this shrine is the marvelous architectural designs carved on the walls and ceilings that grab the attention of the visitors. The beautiful images of Lord Shiva in different moods, including his renowned dancing pose, adorn the ceilings and pillars. To reach the Garbhagriha, one has to descend 20 steps. There is a Swayambhu (self-manifested) linga enshrined under the open sky in the inner sanctum. A statue of Nandi Bull is located at the center of the main porch of the temple. There are two more porches one each on the north and east side. The category of the temple is a subset of the Vesara style, a combination of Nagara and Dravidian architecture.

The temple has no central spire today, but remains of the spire have been excavated. Even without the spire, the temple rises to up to 21 meters high. The main entrance is from the western porch where two Nandis (bulls) stand guard. There are two more porches - one each on the north and east side. The outer wall is fluted to accommodate as many sculptures as possible in the cardinal niches - the most unique of which is the Hari-Hara-Pitamaha-Surya adorning the eastern wall as a centerpiece and portraying Shiva, Vishnu, Brahma and Surya together. The Sabhagruha has a central raised altar, bound by four pillars topped by a richly carved trabeate dome. The rest of the Sabhagruha is occupied by 14 pillars, each with a ornamental Ghatakam and detailed Dhaarvahakas (load-bearing supports). The height of the pillars ranges from 10-12 feet with the ceiling rising up to 14 feet. The Garbhagruha (sanctum sanctorum) is a subterranean chamber and can be accessed by climbing down a flight of steps. The sanctum is a neat square with the ceiling rising high above it. Owing to the fallen spire, it is open to the skies and houses two ‘Shiv Linga’s. The stepped and faceted outer wall houses lots of sculptures that are a treat to identify. The temple is held up by a layer of about 250 elephants called ‘Gaj-thar,’ literally meaning ‘a layer of elephants’. The layer above it houses about 70 Mithuna, Shrungara sculptures. Just outside the north porch is a smaller temple, adjoining the super-structure. The entire temple surroundings measure 50 meters by 35 meters with a small stream to the west.

One belief suggests that the temple was constructed by the Pandava brothers of the epic Mahabharta fame for taking a night refuge during their period of exile (vanvaas). They could not complete the structure which is reflected even today in the missing roof directly above the main sanctum area (Garbha Griha) of the temple. It is also said that there is a km–long passageway which was used by the Pandavas to escape which lies shut and locked today.

Ambernath is built in 982 by the Shilahara king Chittaraja, later renovated by his son Mumunni in 1060 A.D.

The temple is one of the oldest temples situated in Mumbai

Unique for its Architecture and Mythological significance

It is a rock-cut art,architecture from the times of medieval India

The walls contain scriptures in Pali,language older than Sanskrit

It was one of the Strategically located fort for the island

The architecture of the Gateway is Indo-Saracenic style

Watching the sunsets from this beach is a sight worth seeing