The main deity of this temple is Lord Mahabaleshwar who is an incarnation of Lord Shiva. The 6 feet long Swayambhu Shivalinga is known as the Mahalingam. 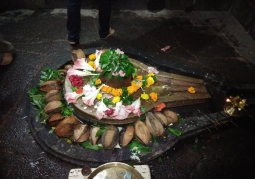 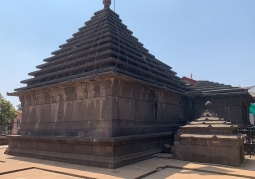 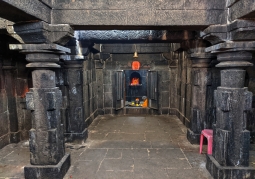 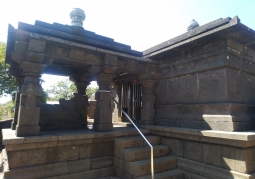 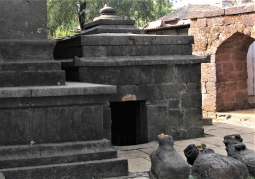 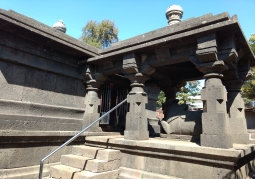 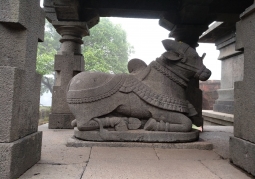 The main deity of this temple is Lord Mahabaleshwar who is an incarnation of Lord Shiva. The 6 feet long Swayambhu Shivalinga is known as the Mahalingam.

The temple is enclosed by a 5 feet wall and is divided into two areas, inner room and outer room. The temple also houses a square shaped raised platform. The sanctum sanctorum has Shiva linga made of black stone, which is 500 years old swayambhu lingam. This self-originated lingam is in the shape of Rudraksha and is called Mahalingam. The trishul of Lord Shiva along with his Damru, Rudraksha and one bed has been preserved in this temple and these are around 300 years old. The Atibaleshwar temple is on the left hand side and Mahabaleshwar temple is on the right hand side. The height of doors are low and there is full darkness inside the temple.

The story is timed around the creation of the world when during the Padma Kalp, Lord Brahma was meditating in the forests of Sahyadri for the creation of human beings. Two demon brothers named Atibal and Mahabal were troubling the sages and other beings in the region. They are believed to have appeared from a Shivalinga that Ravana tried taking to Lanka with him. Their wrongdoing had reached maximum extent, and Lord Vishnu had to fight them to protect the beings of the region. But he was able to kill only Atibal, as Mahabal was blessed that he couldn’t be killed by anyone without his own will. Lord Brahma and Lord Vishnu prayed to Lord Shiva and Goddess Aadimaya to help them get rid of Mahabal. Goddess Aadimaya mesmerized Mahabal with her beauty and asked him to surrender to the Gods. He agreed to lay down his life with a condition that Lord Shiva will reside with him forever in this region. Lord Shiva appeared as a Shivalinga in the shape of a Rudraksha to stay with him and the entire region was named Mahabaleshwar to honor Mahabal. The Mahabaleshwar Temple houses a bed, Trishul, Damru and Rudraksha for this very reason. According to folklore, the temple is visited by Lord Shiva every night as the bed is found crumpled every morning.

The recorded history of Mahabaleshwar dates back to 1215 C.E.  As per folklore, the event was held on 6th January 1665, during which Shivaji donated gold equal to the weight of his mother.

Koteshwar Mandir was constructed in the 16th century A.D.

Temple was built in 1735 by Shripatrao Pant Pratinidhi

It is famous for beautiful Strawberry farms and Waterfalls

Lohagad Fort is one of the Hill forts of Maharashtra

Chandan and Vandan are adjacent forts and has two entrances