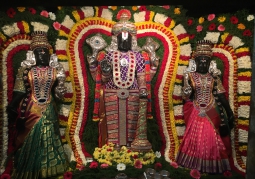 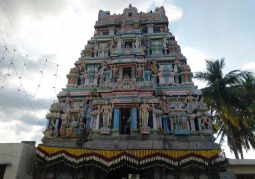 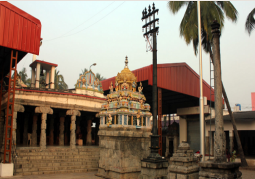 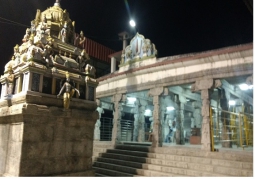 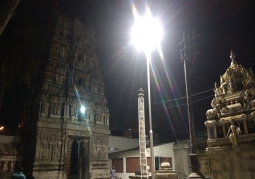 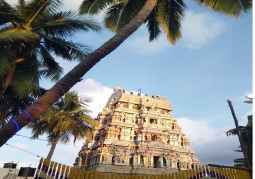 There was a sage named Agni Bindu Rishi, Who engaged in penance and worship of Lord Vishnu on the banks of River Gandaki in Muktinath situated in Nepal. Temple is Built in Dravidian architecture. The 5 tier Rajagopuram of the temple is 45 feet height. The large gateway of the Gopuram is depicted with the Avatars of Vishnu ending with Narasimha Avatar unlike the normal practice of the 10 Avatars. The Sanctum Gopuram is surrounded by Lakshmi Narasimha, Hayagriva,Vishnu, durga etc, From the style of construction and other ancient aspects of the temple including inscriptions, Bindu Madhava Perumal Thutipet can be estimated to be more than 800 years. The temple itself is at a level below the Gopuram and the main deity is on an elevated platform with a mandpam also has beautiful carvings.

An Asura called Perathurtha who created obstructions to the rituals of Roma Maharishi was cursed by him to become a Tiger.As he continued to rage around Lord Vishnu ordered Indra to take the form of a tiger to subdue him. The Asura requested the Lord to stay here at Bindu Madhava Perumal Thutipet. The mythological story related to this Panch Madhav Kshetras goes like this. Twashta was one of the Prajapatis created by Lord Brahma.He had one son named Vishwarupa. Vishwarupa was very noble and was jitendriya.He once started doing great tapa. Indra became afraid that Vishwarupa might take his kingdom so resorted to all kind of tricks to destroy and disturb his tapsya but all in vain.Then Indra chopped Vishwarupa’s head with his vajrayudh. Indra also lured Taksha to help him in chopping heads of Vishwarupa.Vishwarupa is said to have three heads.On hearing the sad end of his beloved son Twashta got enraged and started homa to create a massive Asura from his krodhagni. Twashta named him viratasura and ordered him to defeat Indra to avenge the death of his elder brother.Viratasura defeated Indra but later on the treacherous Indra befriended him and killed him.Thus Indra acquired the sin of Brahmahatya, which is considered to be worst kind of sin. To absolve himself of this great sin Indra consecrated these Pancha Madhava temples.

The Temple was renovated during the King Krishna Deva Raya of Vijayanagar kingdom and completed by Narasimha Ballala.