The main deity of this temple is Bhogha Nandeeshwara, who is an incrarnation of Lord Shiva. 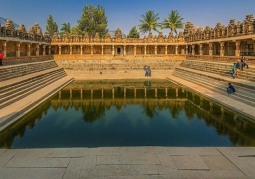 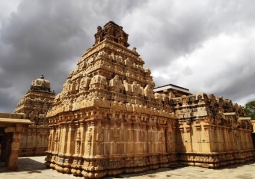 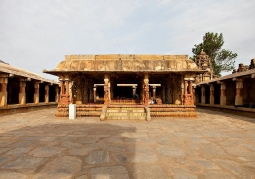 The main deity of this temple is Bhogha Nandeeshwara, who is an incrarnation of Lord Shiva.

The hills were called Ananda Giri, which means “The Hill of Happiness” to be “in enjoyment”, which is called “bhoga”. So, the temple at the base of the hill is always the “bhoga” deity Bhoga Nandiswara (Lord shiva along with Nandhi). The large mandapa in front of the main shrines has great art work with each pillar possessing beautifully carved images of gods, animals, puranic characters, sages and scenes depicted from Hindu mythology. The four pillars of the navaranga of the Bhoga Nandishwara shrine are carved with fine small figures on all sides. This temple was built in Dravidian style and beautiful stone curving on the outer wall of Garbhagriha of Temple. This is a twin temple side by side and  The Nandi idol made of granite. The North one is dedicated to Bhoganandishwara and the South shrine to Arunachaleshwara. Each consists of a Garbhagriha, a Sukanasi and a Navaranga. The twin Garbhagrihas are built on a raised platform, where Columns on the platform are richly decorated with images of various gods, flora and fauna. The pillars crafted out of Gray Green Granite, Kalyana mantapa supported by ornate pillars in black stone.

Mandapams : Temple have individual Nandi Mandapa in front. There is one Kalyana Mandapa and one Tulabhara Mandapa built by the Vijayanagara kings. In front of this temple Kalyana Mantapa built of black stone very interestingly carved with creepers and birds. Within this mantapa there are several inscriptions in Tamil. The kalyana mandapa is breath takingly beautiful with passionately carved pillars, artistic roof and intricately carved images of Shiva, Parvathi, Vishnu, Mahalakshmi, Brahma, Saraswathi, Surya and his consort on different corners of the mandapa. The sculptures are carved with great detail and lot of caring towards every minute part of the sculptures using black granite in trademark Hoysala's style. The other two shrines of Bhoganandeeswara & Arunachaleswara have large Maha mandapas followed by the sanctum housing Shivalingas. The ceiling carvings depict the Ashtadikpalakas (eight gods ruling the eight directions) and the marriage of Shiva and Parvati. Vasanthamantapa located just opposite is noted to be the place where Shiva and Parvathi were married. It is open on all sides, each exquisite sandstone pillar relating a story about the divine wedding.

Koneru : A large Square stepped Tank Shringi Theertha is the temple pond (Kalyani). This pond (Kalyani) has rock cut steps going down to it on all four sides, it is enclosed on all four sides by a pathway and a running mandapa. Legend has it that this pond (Kalyani) was built by the divine Bull Nandi with his horn into the ground to draw out water from the divine Ganga. This pond (Kalyani) is believed to be the starting place of the Dakshina Pinakini or South Pennar River. Pinakini means 'bow shaped' and Shiva himself is Pinaki one who wields 'Pinaka' (the mighty bow). A fresh water well has constructed inside the complex. Huge open varandahs around kalyani with small and 3 tier, 2 tier towers. Lot of Niches on varandahs with God and Goddess sculptures of hindu deities.

Temple Walls : The outer walls of the shrine are also filled with nice carvings. The construction with pilasters on the outer walls of the shrines, perforated decorative stone windows which contain figures of a dancing Shiva (south wall of the Arunachaleshwara shrine) and Durga standing on a buffalo head (north wall of Bhoga Nandeshwara shrine). A granite slab with Telugu inscription and Window grill made of nine Ganas.

This temple was built in 9th century by Bana Queen Ratnavali. The Chola kings in the 11th century added the roof, the Hoysala dynasty added the marriage hall to the temple structure and the outer wall and buildings were added by the Vijayanagar kings in the 13th century. Chola, Hoysala, Pallava and Vijayanagara kings are the contributors of this temple.

Idol of Amaranarayana believed to be concentrated by Lord Indra

This is a historic temple and is nearly 700 years old

The dam is the main source of water to nearby villages