The temple has images of Tirthankara Aranath, Mallinath and Munisuvratnath. This basadi, completely made of carved granite rocks, is known as Tribhuvana Tilaka Jina Chaityalaya. 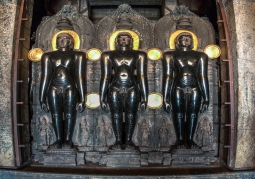 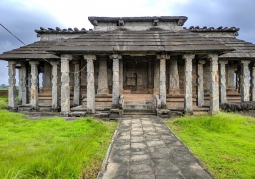 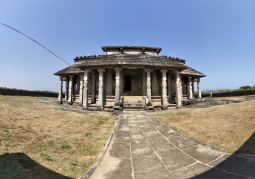 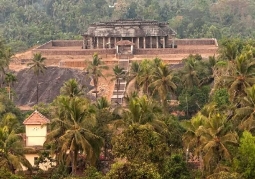 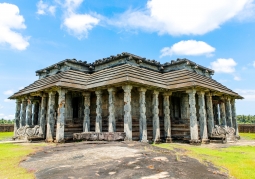 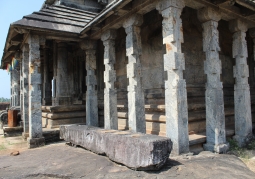 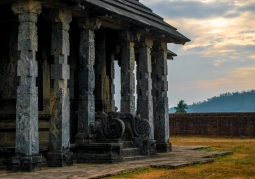 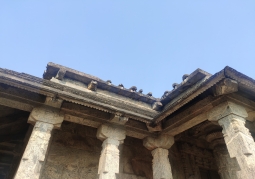 The temple has images of Tirthankara Aranath, Mallinath and Munisuvratnath. This basadi, completely made of carved granite rocks, is known as Tribhuvana Tilaka Jina Chaityalaya.

It has been constructed entirely of Granite. The temple has 4 identical doorways in the north, south, east and west that all lead into the Garbhagriha and hence is popularly known as Chaturmukha Basadi. A seated form of the Tirthankaras is carved into the lintel of the northern, eastern and western doorway. The southern doorway features a carving of Gajalakshmi on the lintel. This is flanked by sculptures of bedecked dvarapalas. Niches in the wall of this passage also contain sculptures of other Gods and Goddesses. An idol of the Yakshi Padmavati, Malli, Ara, and Suryata are also housed in the Garbhagriha. This temple was built in Vijaynagara style of architecture. It is also referred to as Tribhuvana Tilaka Jina Chaityalaya and Ratnaraya Dhama in some inscriptions. The Basadi is built in the form of a square mandapa with a doorway and pillared portico on each of its four sides and a pillared verandah. It has life size statues of three Tirthankaras on each side and small images of 24 Tirthankara. It took 30 years to construct this temple. In all, there are 108 pillars in the temple complex. Each pillar is an exhibition of the architectural skills of the masons of that time and carries a piece of history in itself. One needs to spend time to connect the dots from pillar to pillar.

The Durga Parameshwari temple is more than 1300 years old

The idol of Ganapathi is probably belongs to the 11 century A.D.

This temple dates back to 2nd century A.D

National wide Vedantic learning in 13th C.E under the leadership of Sri Madhvacharya

Temple is built by Basappa Nayaka in 17th Century A.D.

It is built in typical Tulunadu style

This Temple is entirely carved out of Saligrama rock

Has an extensive collection of coins belonging to various dynasties

Haven to the Truly Wild

Nestled amidst forests of Western Ghats and adjacent to Agumbe ranges

Famous as Virgin Beach for its miles of unspoilt white sand