Other than the main deity we can find Valli ammavaru in seperate shrine. 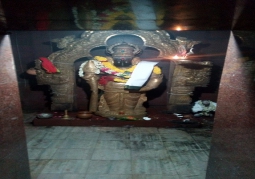 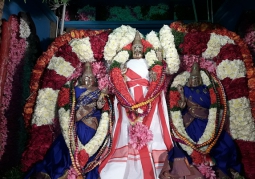 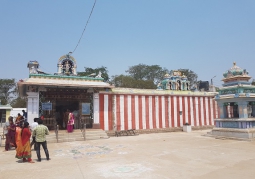 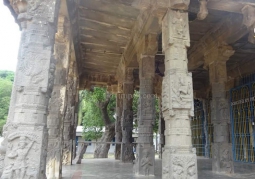 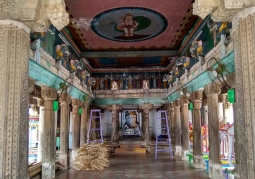 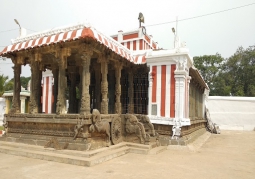 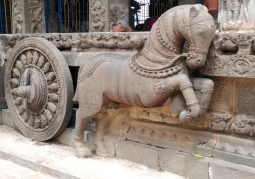 Other than the main deity we can find Valli ammavaru in seperate shrine.

Lord Kumara has killed two demons here with his sakthi weapon. One of the demons named Mallasura prayed god that his name should become eternal. So Lord Kumara gave this village this name "Mallam". The temple faces East and was built in Chola and Vijayanagar architecture. The small idol of Subramanyeswara Swamy half above the ground, devoid of arms. This idol was worshipped for several centuries until a proper idol was installed in recent years. The new idol is now worshipped regularly while the ancient idol can be seen in a corner of the Sanctum. The Ekatala Dravidian vimanam has octagonal shikara and the final.

Temple Mandapam was built on a 100 pillar rock cut corridor, pillars are beautifully carved with sculptures from the epics Ramayanam, The Maha Bharath, The Bhagavatham and The Siva Purana. There is a war scene at the base of the mandapa. Horses gallop, Elephants charge while mythical beings stand guard above and below. The temple’s history painted on the ceiling. The paintings are a recent addition. The outer walls have been painted with the usual white and red colours Except for this story of the Pandya king and some inscriptions dating back to 635 A.D. Subramanya swamy koneru located at opposite to temple, Middle of the tank there is a Mandapa with beatiful sculptures carved on its tower. The Temple is majorly built in Granite & Brick.

The temple is believed to be built around 630 A.D by Pandya Bhupathi and Later renovated by Chola rules during 10th and 11th centuries. An inscription of Kampavarman, dated in the 20th year, found on a stone slab set up in front of the Subramanyeswara swamy temple speaks of a person holding his severed head by the tuft in his left hand, while the right hand grasps a sword. It registers a gift of land made by the urar of Tiruvanmur of Pattai-Pottan for the pious act of Okkondanagan Okkatindan Pattai-Pottan, probably his father, in cutting off flesh from nine parts of his body and finally his head as an offering to the goddess Bhitari, i.e., Durga. (The rituals connected with human sacrifice offered to the goddess Durga are described in the Kaika-Purana, Chapter 70). The King handed over the responsibility of the temple corridor construction to the entrusted craftsman. This famous craftsman had a son who was young with high professional skills. He was in a love with a girl and was about to visit her place. To impress her, he sculptured two stone horses along with wheels and used to turn the temple corridor with his power and skills. By this time his father came to know about his son’s act, the temple corridor already took 180 degree turn and about to ride away, so he broke the legs of the horses to stop the further movement. The father killed his son in anger for his son’s foolish act, then killed himself.

Chola Kings stood as the major contributors in the well being of this temple.

A Powerful village goddess on the banks of Kalangi river

Swayambhu moorthy is six feet tall located on Hills inside a Cave.

Self manifested Goddess & lingam is emerged out of Yagna gundam

Golden sand and warm water with full peace and tranquility