The main deity of this temple is Lord Buddha. 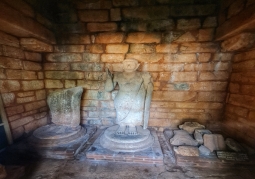 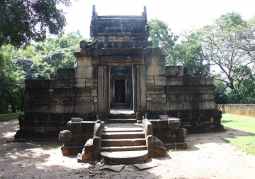 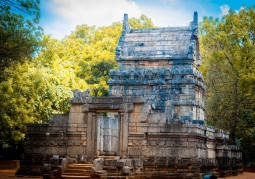 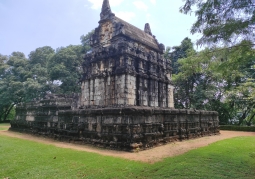 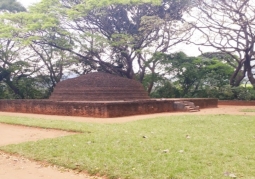 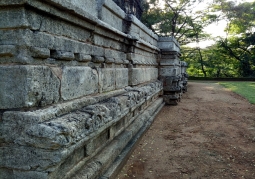 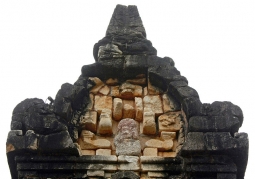 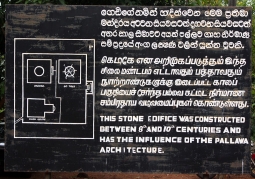 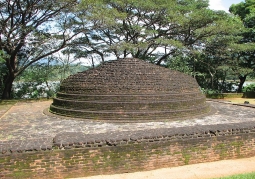 The main deity of this temple is Lord Buddha.

The building was constructed in between 8th and 10th centuries with dravidian architecture in (Pallava style) and is believed to have been used by Buddhists. A pillar inscription of the 9-10th century A.D. that was unearthed from the site revealed Nalanda Gedige was a Buddhist monastery. Recorded in the Sinhala language, it includes a code of regulations made for the temple. Also some scholars describe this building is a dravidian architecture dedicated to a Mahayanaa cult with pronounced Trantric learning and known for an ancient monument of possible Vajrayana (Tantric) Buddhist affinities. Nalanda Gedige is designed on the lines of a Hindu temple with a mandapa, an entrance hall (originally roofed), a short passage to a Bare cello and an ambulatory round the holy center. A limited number of the original Hindu deity statuettes exist within the temple, however, a statue of the God Kubera appears on the South side of the Tympanum over the sanctuary, a feature that can only be seen in Sri Lanka.

The richly decorated facade sections, laboriously reassembled in 1975, are predominantly in the South Indian style. Although they cannot be precisely dated, they are believed to have originated sometime between the 8 to 11th centuries. Nalanda Gedige is a curious hybrid of Buddhist and Hindu architecture. Some of the design elements are distinctly Hindu, such as the mandapam or hall of waiting. Yet there is no sign of Hindu gods. There are erotic but eroded Tantric Buddhist carvings, much like the famous ones at Khajuraho in India. The richly decorated façade sections are in the 7th century style which flourished at Madras, South India. However, the southern section has a semi-circular niche containing in high relief a squat figure of Kuvera, the god of wealth, seated on a lotus plinth - an image that is only found in Sri Lanka.

According to what historians and archaeologists have discovered about Nalanda Gedige, the structure was created between the 8th and 10th century A.D. This was a turbulent period for ancient Ceylon, with the kings of South India settling in the wake of the declining Sinhalese monarchy. Many centuries later, in 1893, while the British tried to discover the mysteries of tropical Ceylon, H.C.P. Bell, who was the archaeological commissioner at the time, found the building in a deep jungle area near a village. Understanding its historical importance, he then made a concentrated effort to search for it and acquired the surrounding land for that sole purpose.