The main deity of the temple is known as Someshwara and also known as Pathala someshwara. Here lord is an incarnation of Lord Shiva. 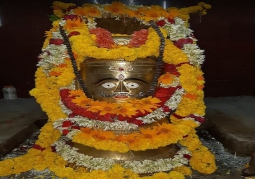 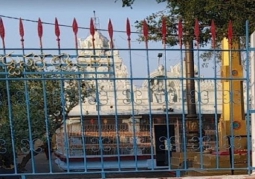 The main deity of the temple is known as Someshwara and also known as Pathala someshwara. Here lord is an incarnation of Lord Shiva.

Patala Someswara temple is facing towards East direction. The Antarala and the Garbhagriha of this shrine are at a lower level (about to 2 feet) than the Mukhamandapa level. The Garbhagriha is built with stone and the superstructures is of brick. The doorway leading into the Garbhagriha is of Dhwisakha. Garbhagriha sanctum a life-size idol of God Shiva called Potala Someswarasvami set in a round panavattam, square sikhara. At the base on either side of the doorway the dwarapalas-Nandi and Mahakala figures are carved. The garbhagriha floor level is further lower than that of the antarala by about a foot. The Garbhagriha ceiling is hollow.

Mandapams & Pillars - The Mukamandapa consists of six pillars. The Antarala is a square chamber and the floor level is lower than Mukamandapa floor level. Antarala, Garbhagriha roof is very plain hollow. The Rangamanda consists of sixteen pillars in four rows of four each. The central four pillars are square shape and all pillars are belong to the Chakrabhandana. The Rangamandapa consists of sixteen pillars in four rows of four each. All the pillars belong to the Citrakhanda type. The central four pillars are square in section and have a square base and a square cube with an octagonal shaft connecting each other. In the upper portion these pillars show lasuna, Tadi, Padma, and Phalaka. The Kumbha part over the tadi is constricted.the pillars of this Mandapa are devoid of any carvings, except the left side pillar off the East entrance which has on the Southern face, a small Ganesa figure in seated posture. The Mandapa has entrances on the East, the North and the South. In between the four central pillars the ceiling of this Mandapa forms into a lozenge inset with a lotus medallion. The Mukhamandapa consists of six pillars of Citrakhanda type of the six pillars four are located in the central square the remaining two flank the antarala doorway. The four central pillars of this mandapa are quite similar to the central pillars of the Rangamandapa. The two pillars flanking the doorway are of citrakanda type. The pillars carry no carvings. The ceiling in between the four central pillars foims into a lozenge and exhibit a lotus medallion. The Temple is built with Stone and Brick.

The deity was installed and worshipped by Saptarishis.

Lord Vishnu in the form of Mohini enticed Bhasmasura here

Sri Rama’s Drawing Anjaneya on a rock with arrow.