Sri Ranganathar Temple - The main deity of this temple is Lord Ranganathar. He is an incarnation of Lord Vishnu. Lord Ranganatha is seen sleeping on the 9 ft long 3 ft height. The interesting feature of Ranganatha at Thiruparkadal is that he is seen resting his head (Southern direction) on a Marakkal (Measuring bowl) in a grand Anantha Sayana Posture.

Sri Ranganathar Temple - Accompanied by his consorts Sridevi and Bhoodevi and Brahma seated on the lotus flower rising from the Lord's navel. 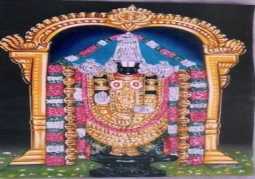 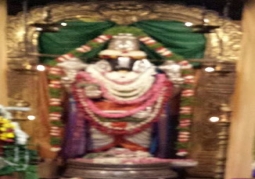 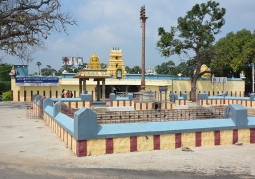 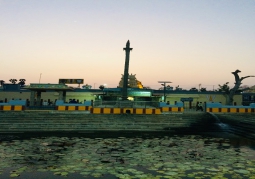 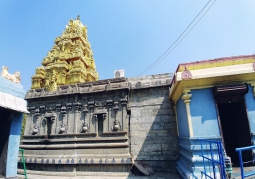 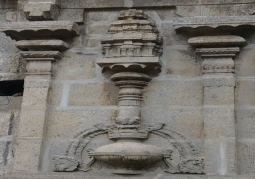 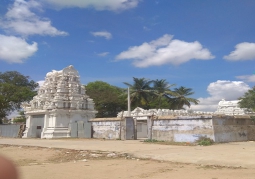 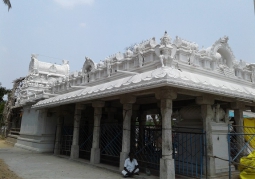 Sri Ranganathar Temple - The main deity of this temple is Lord Ranganathar. He is an incarnation of Lord Vishnu. Lord Ranganatha is seen sleeping on the 9 ft long 3 ft height. The interesting feature of Ranganatha at Thiruparkadal is that he is seen resting his head (Southern direction) on a Marakkal (Measuring bowl) in a grand Anantha Sayana Posture.

Sri Ranganathar Temple - Accompanied by his consorts Sridevi and Bhoodevi and Brahma seated on the lotus flower rising from the Lord's navel.

Prasanna Venkatesa Perumal Temple - Maharshi Pundarika took up a pilgrimage to Vishnu temples. When he landed on this temple at Narayana Chathurvedhi Mangalam, he was shocked to see Shiva in the sanctum and retreated regretting the mistake. Asuras, Karan and Doosan, Had undertaken penance here and hence Lord Shiva is referred to as Doosheshswarar at this temple. An aged person intercepted him and told the Rishi that what he saw was the shrine of Lord Vishnu. Rishi denied, the aged person took the Rishi to the sanctum and stood on the Avudayar as Prasanna Venkatesa Perumal and explained him that Shiva Vishnu were one and not different from each other. The lord also told the Rishi that as he could not worship Vishnu in Thiruparkadal, the darshan was offered to him here. As the lord offered his ‘Prasanna’ – darshan, the lord is praised as Prasanna Venkatesa Perumal. Both temples are faces East direction.

The 3 tier Rajagopuram of this temple is in dilapidated state and a Maharishi Gopuram. In the 108 Divya Desas – holy places connected with Vishnu worship, Tiruparkadal cannot be reached with human body as it is not on earth. To make up this loss to the devotees, the worship in this temple gives the devotee the gift of Tiruparkadal darshan, the 107th Vishnu Divyadesam. There is no Sorgavasal system in the temple. Instead, there are three entrances through which Perumal can be worshipped directly at the sanctum itself on the Vaikunta Ekadasi day. This is a very rare structure in a Perumal temple. Each side of the Pundareeka Vimanam on top of the Perumal sannidhi, has the following deities carved, South - Dhakshinamurthy, West - Lakshmi Narasimha, North - Brahmma, East - Gajendra Varadhan. The age-old brick walls were ‘broken’ and replaced with tiles and slabs. In many parts of this temple, inscriptions on the wall were lost due to sandblasting. The sacred spring Pundarika teertham is just opposite the temple. The twin temples were constructed using charnockite and granite rocks.

Sri Ranganathar Temple - Vimanam over the sanctum is called as Ranga Vimanam. On the Ranga Vimanam, one finds the Mandhakini hill, the posture of nectar being drilled as well as the Saptha Rishi’s penance posture. This temple is simple with just Artha Mandapam with 24 pillars, and one Mahamandapam which includes the Sanctum Sanctorum.

Prasanna Venkatesa Perumal Temple - Sage Pundareeka, a staunch Vishnu devotee, was in the habit of visiting "Thirupparkadal" to worship Lord Vishnu everyday. He was on his way one Vaikunta Ekadasi day when he got delayed. There fore he decided to worship the lord at the nearby village temple before the "Ekadasi naazhigai " was over. He saw a small temple and Pushkarni at this village which was then called Avani Narayana Chaturvedi Mangalam. After quickly bathing in the pond, he went into the temple only to find a Shivalinga (Dooseshwara) at the Sanctum Sanctorum. Disappointed that he had not got a glimpse of Lord Vishnu as he had expected, and worried that he would not be able to worship him before the auspicious time was over, he walked out of the temple. An old man appeared before him and asked him why he was so sad. When Sage Pundareeka narrated what had happened, the old man told him that what he had seen was indeed Lord Vishnu's shrine and invited him to go along with him inside the temple. On reaching the Sanctum Sanctorum, the old man disappeared and Lord Vishnu gave darshan to the Sage as Venkatesa Perumal standing over the Shivalinga.

In 27 stars, only 2 have the prefix Tiru, Tiru Onam attributed to Perumal and Tiru Adhirai to Lord Shiva. Tiru represents all auspiciousness. The beauty and luster of Chandra the Moon began to diminish due to a curse. One of his wives, the deity of Tiruvonam star performed intense penance on Perumal for his remedy. Pleased with her penance, Perumal appeared before her on a Tiruvonam star day and relieved Moon of his curse. Since then, this shrine assumed importance for the Tiruvonam star. Those born of Tiruvonam star are advised to visit and worship in this temple on the star days, Rohini and Hastham star days and on the third day from the New Moon day called Moondram Pirai in Tamil and perform abishek and archanas to Perumal to gain wisdom. As this star is specifically related to Perumal all pray here. The standing form of Lord Perumal on the Avudayr of Shivalinga symbolizes the oneness of Shiva -Vishnu worship. Hence, Pradosham related to Shiva also is devoutly observed in this temple. Sri Ranganathar Temple - According to the legend, Brahma seeking the Lord's help to stop Saraswati flowing in the form of River Vegavathi to destroy the Yagasala where he was performing the ritual to see the Lord. The Lord obliged him by lying across the course of the river.

Sri Ranganathar Temple - This temple was patronized by Krishna Davaraya, and an idol of him is placed inside the sanctum.

These temples were built 1000 years ago during the Pallava period, renovation was done recently in 2011.