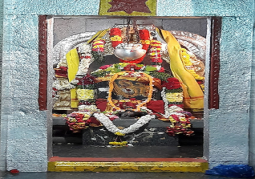 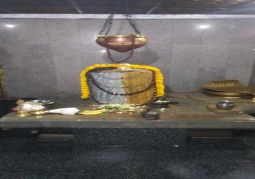 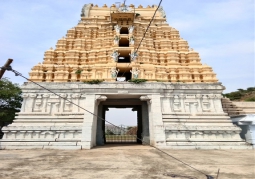 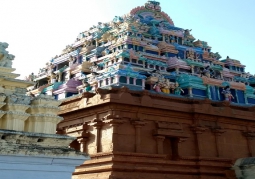 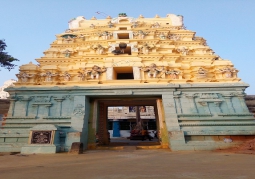 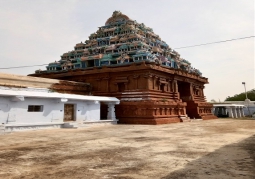 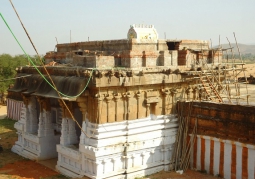 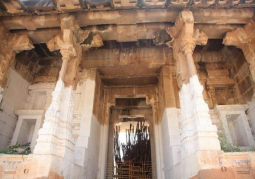 Sangameswara Temple is also known as Suryaskhetra. The temple facing towards East direction and Sangameswara is delicately carved in the Vijayanagara style. The temple also has four gopuram gateways in four directions enclosed by rectangular courtyard. There is parrot on the top of the Dhwajastamba. As the predition of Sri Veera Brahamendraswami, if its beak touches the Thriveni sangamamam (Chitravathi, Papagni, Mogamerupavani) water it flies away it shows the end of Kaliyuga. The vimana over the garbhagriha is a dwitala and crowned by a four sided griva and sikhara. The garbhagriha enshrines a Linga set on a square panavattam.

The prakara walls and the mandapa surrounds the temple was built in 1543 AD during the region of Achyuta Devaraya (1530-1542). The epigraphs of Animela that the Sangamesvara in mentioned to as “Srimatdevadi Devata Sarvabhauma Satchidananda Paripurna Saptarishis Varadundiana Animela Sangameswara (that of the first among the gods, king among gods, completely immersed in the world of bliss and he who gave books to seven rishis). Epigraph evidenced that the garbhagriha, antarala and the mukamandapa was built in 1367 AD reffered by the temple priest named prolajiyya which the period assigned the Vijayanagara dynasty. Mandapams & Pillars consists of a garbhagriha, antarala, mukhamandapa and a mahamandapa and all these surrounded by a pillared corridor.

Near the confluence of the Magameru with Papagni, there is a hamlet called Rajupalem in which the solar race kshatriyas lived there. The hards of cows from Rajupalem and same cows from nearby villages used to come daily to the Animela hills for gazing. One of the cow from the herds shed its milk on an out hill under which the Sangameswara lay buried. The owner of the cow, a resident of the Rajupalem came to know this and tried to chase the mystery by closely watching the cow. He was wondered that he saw the cow shedding its milk over the out hill and hit the cow with his axe. But the axe missed its goal and hit on the tap of the Shivalinga making a deep mark which is said to be found on the present Sivalinga also. Than, he came to conscious and repented his action. Later on, he unearthed the Shivalinga with its panavattam and built a temple and affered daily workship. Sangameswara temple was built in 14th-15th century A.D. by Vidumbas. Vijayanagar dynasty kings was contributed for this temple.