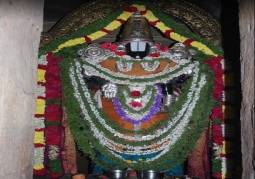 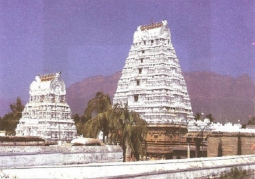 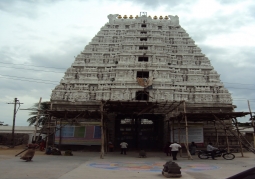 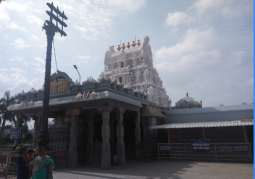 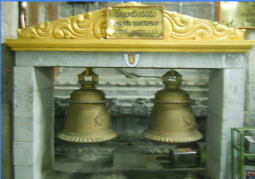 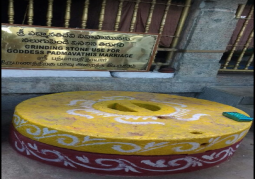 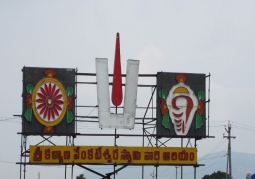 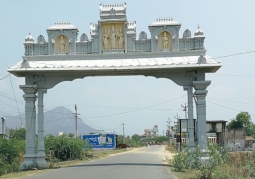 When Lord Srinivasa came to the forest for hunting saw Padmavati playing with her friends, fell in love with her and married her here and so the place came to be called ‘Narayanapuram’. As it was Sri Narayana himself who incarnated as a bridegroom to marry Padmavati here, then the place is known as ‘Narayanavanam’. God named as Kalyana Venkateswara Swamy. Kalyana Venkateswara Swamy temple is facing East direction and is built in Vijayanagar style of architechure.

Gopuram - The main Raja Gopuram of the temple was built by emperor Krishnadeva Raya. It has seven tiers and looks beautiful as it rises to a height of 150 feet. The second Gopuram was built by Veera Narasimha Deva Yadavaraya. This has three tiers and is topped by Kalasas. In front of the main temple, a huge Dwajasthambam can be seen. It is completely sheathed in brass and the main entrance had been gold plated. There is a Garuda Mandapam, in which Garudalwar is seen facing the sanctum of the Lord.

A Mud Fort was built here during Narayana Raju’s reign.

The Temple Tank is at a short distance from the place where the Theppostvam takes place every year. Similarly, Brahmotsavam is also celebrated.

Narayanavanam was once the capital of the Karvetinagar Surya Vamsa Rajas. It is the place where Lord Venkateswara Swamy married Goddess Padmavathi Devi. Padmavati Devi is daughter of a King named Akasaraju. She fell in love with Lord Venkateswara Swamy and was married to him. After their marriage in Narayanavanam, Goddess Padmavathi brother constructed this temple. Near Padmavathi Devi Temple you can see a big stone on which turmeric paste used in the marriage was grinded.

Akasa Raju was the ruler of this town. His brother Thondaman Chakravarthy covered it. This was the place where the parents in law of Tirumalesa resided. Akasa raju was born in Narayanavanam, who was childless tilled land in preparation for performing a Yagna there. Thondaman was his brother. He found the baby Padmavathi in a thousand petalled lotuses. So he thought that it was no longer necessary to perform yagna and took the baby home. She grew up as Padmavati Devi (part of the story is also mentioned in ‘srinivasa mangapuram’ section). Padmavathi was brought up in Narayanavanam. Moreover, it was here the marriage of Lord Venkateswara was celebrated. All the three crores of deities came to see the marriage celebrations of Lord Venkateswara. Siva and His Ganas who came were especially enamoured by Narayanavanam. Mother and son Vakula Mata and Srinivasa obtained land to build an Ashram in lieu of which they made the promise of the first worship, first offering and first darshan to Varaha Swamy and lived happily there. One day an angry elephant created havoc on the Ashrama. Srinivasa got on to the back of a wild horse and chased the elephant. The Elephant made him trail to the flower garden which was far away on the outskirts of Narayanapuram where he saw Padmavati taking a stroll in the garden. Padmavathi and Srinivasa fell in love with each other. They were form in their resolve to get married. Mother Vakula negotiated, Sage Narada mediated, the Swami went in the guise of an Erukalasani, a soothsayer, to the King's quarters.

Sri Kalyana Venkateswara temple is constructed between the period 1541 AD by Akasa Raja. It is said that Penugonda Veerappa-I rebuilt the temple of Sri Kalyana Venkateswara in Narayanavanam in 1541-42. Renovation was undertaken and completed by Surajmal Karva. A Mud Fort was built here during Narayana Raju’s reign. Pallavas, Cholas, Yadavas, Saluva Reddy's and Kings of Karveti Nagaram rebuilt the temple many times and installed many more images of Gods.