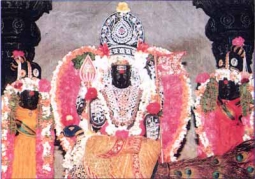 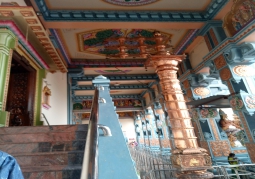 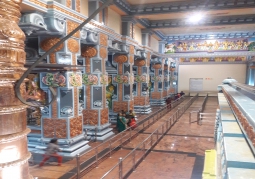 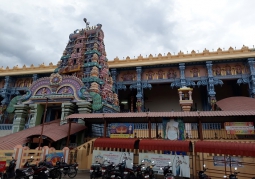 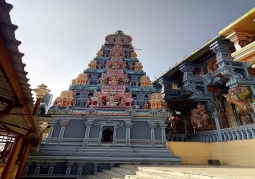 Sri Balamurugan temple Lord manifested in Bala form. So temple name called as Balamurugan temple. This is the East facing temple with Chola architecture. The wall surrounding the shrine has small idols of Ganesha, Dakshinamurthy, Murugan, Brahma, Durga, and Chandikeswarar. The new 'mulvimanam', built atop of the sanctum, the newly-designed gold-plated kalasams kept atop the 'vimanams' (towers). Beautiful wall paintings on walls and ceilings from Hindu epics. A spacious hall around the shrine with huge pillars. The entire temple is covered by 3 storey high ceilings with huge pillars. The granite floors ensure a soothing walking surface. In temple courtyard there is a temple tank. The garbhagriha is made of granite stone. The idol of the main deity Bala Murugan was installed in a chariot which is made of granite. Over the passage of time an ordinary sandstructure was converted into a stone shrine.

There is a famous belief that once a demon, intoxicated by the power of Lord Shiva's boon and his prowess, began to harass the devas very cruelly forcing them to live in oblivion. Then the demon saw Indira, the king of devas in his hideout and chased him. Indira reached this Ratnagiri mount where Lord Muruga changed him as a peacock, his vehicle which made the demon to return disappointed. This wonder took place here, according to scriptures. This temple built from 14th century, and recent renovation is done in 1980 and 2001.

History of Swami Bālamurugan Adimai - Born on the 24th of January 1941 (In the Vikrama year of the Tamil calendar on the 11th day of the month of Thai) in the small village of Kilminnal adjacent to Rathinagiri, he was the fourth child born to Sri Kandaswami Mudaliar and Smt. Sinagarammal. He was named Dakshinamurthy and Sachidanandam, both being names of Lord Shiva. On completion of his schooling he entered the services of the Electricity Department. Soon after, he entered into holy matrimony with Sivakami and was blessed with two daughters and a son. One day in his 27th year, on his way to work, he climbed the hill to offer his prayers. There was neither camphor nor incense available at the temple. He walked around the shrine with a heavy heart and was suddenly overcome with divine awakening. He fell in a faint to the ground and on waking up was unable to remember his own self. He dressed himself in a loincloth. He took a sacred vow not to leave until the temple was restored to its former glory. This memorable event of Swami's spiritual awakening took place on 20th March 1968. Ever since then Swami's spiritual well being of his devotees has continued unabated.

Museum has Artifact Collection from about 8th c.e