The main diety of this temple is Sri Balasubrahmanyam Swamy, facing East direction. Lord Murugan is 4.5 feet height, he holds a jabamlai (rosary) in his upper right hand and a kamandalam in his upper left hand like Brahma. 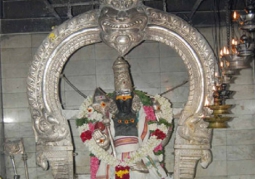 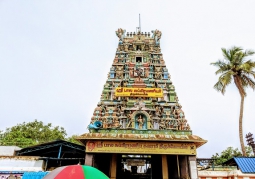 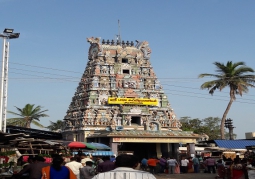 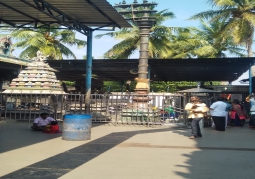 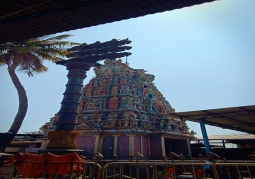 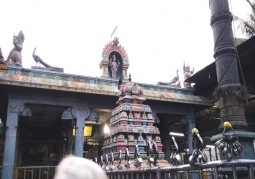 The main diety of this temple is Sri Balasubrahmanyam Swamy, facing East direction. Lord Murugan is 4.5 feet height, he holds a jabamlai (rosary) in his upper right hand and a kamandalam in his upper left hand like Brahma.

Arulmigu Sri Balasubramanyam Swamy temple is facing East direction and was built in Dravidian style of architecture. The dhwaja stambham is placed infront of the temple. In the Mukha mandapa, there is a scene portraying Arunagirinathar singing the acclaim for God Muruga. Lord Murugan holding the hand of Valli in preparation for wedlock is only the one of its kind Utsava Moorthy is placed in the Kalyana mandapam.

There is a large temple tank in the vicinity of the temple. It is of significance to note that all the god images except that of Muruga are sculpted in emerald stone. Close to the Kodimaram (Dwaja stambam), the peacock the rath (vehicle of Lord Murugan) which is made out of the precious green stone known as the “Margatham”. There is no Peacock alongside the Moolavar (Primary divinity).

Legend 1 - After the ‘Pattabhishekam’ Lord Rama sent away his pregnant wife Sita because of the people’s abuse. Lava and Kusa were born there. Lord Rama then performed ‘Aswamedha Yaagam’. To perform a yaagam without the wife is against the rules prescribed for conducting the yaagam. So, the Yaaga horse sent to different countries was imprisoned and tied up. Since the horse did not return Lord Rama sent Lakshamana to release it. Hence Lord Rama himself went in person and got released the horse. This is the information of the Ramayana period. This historical information can be got in the Thiruppugazh song that two small boys confronted Rama with bow and his retinue in this victorious place. The history of this holy place says that both Lava and Kusa fought with Lord Rama and that place is Siruvapuri alias Chinnampedu. Siruvar+Ambu+Etu became Chinnampedu. ‘Pedu’ is the quiver.

Kai kotutha kai (Hand that gave hand) - Murugamaiyaar, a Muruga devotee who lived in this sacred place was always in meditation of Lord Murugan. Her husband who doubted her chastity, cut off her hand. But she continued to be in meditation. Lord Muruga appeared before her and graced her. Her hand got attached and she regained her original physical self.

Legend 2 - Some hundreds of years back there lived a lady called Murugammai in this village. She had been a very ardent devotee of Lord Muruga here. She always used to chant his name and praying him, for years. Her husband who didn't like her worshipping all the time was warning her to stop it. But she never listened to him and her husband one day cut her arms off out of anger. Even then, Murugammai cried for help only with Lord Muruga. The lord, who was pleased with her bhakti, made her hands join even without the signs of any wound. Siruvapuri is believed to be the Kusalapuri of Ramayana. This Temple was built in 500 years ago.

Arunagirinathar has visited this temple and sung many Thiruppugazh songs here. He also has composed an Archanai Thiruppugazh on Lord Muruga, which if recited fulfils ones wishes. The history of this holy place says that both Lava and Kusa fought with Lord Rama here.