The main diety of this temple is Ekambareswarar and incarnation of Lord Shiva, facing East direction. The symbol of mother embracing the Spatika Linga is still visible. The swayambumurthy linga in these temple is conical in shape, unlike the usual cylindrical shape. 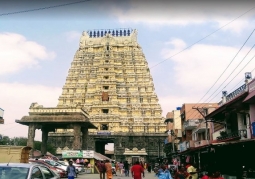 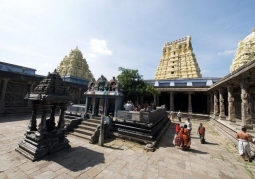 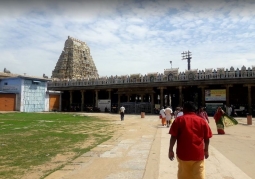 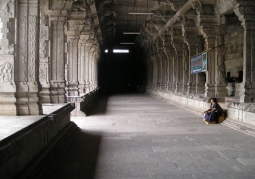 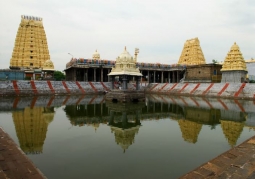 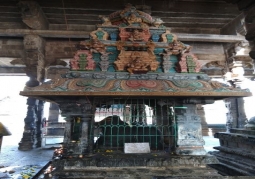 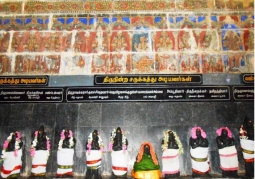 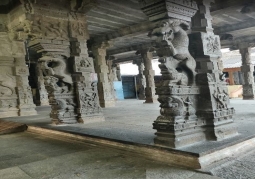 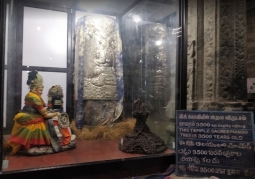 The main diety of this temple is Ekambareswarar and incarnation of Lord Shiva, facing East direction. The symbol of mother embracing the Spatika Linga is still visible. The swayambumurthy linga in these temple is conical in shape, unlike the usual cylindrical shape.

Once Parvati, the consort of Shiva was doing penance under the temple's ancient Mango tree near Vegavathi River. In order to test her devotion Shiva sent fire on her. Goddess Parvati prayed to her brother Vishnu for help. In order to save her, he took the Moon from Shiva's head and showed the rays which then cooled down the tree as well as Parvati. Shiva again sent the river Ganga (Ganges) to disrupt Parvati's penance. Parvati prayed to Ganga and convinced her that both of them were sisters and so should not harm her. Subsequently, Ganga did not disturb her penance and Parvati made a Shiva Linga out of sand to get united with Shiva. The God here came to be known as Ekambareswarar.

Ekambareswarar Temple faces East direction and has a tower (Raja gopuram) is 57m tall, 9 tier and it was built by Krishna deva Raya, the popular Vijayanagara Emperor in 1509. In the middle stood a tall Dhwajastambha or the flagstaff on a beautifully carved stone base. The special feature of Ekambareswarar temple is that the roof of this temple contains the twelve zodiac signs. The temple shikar stood tall like the Mount Kailash that it represents topped with 7 Kalash. There are inscriptions dated 1532 C.E. (record 544 of 1919) indicating the gift of number of villages made by Achutaraya. There is a thousand pillared hall (Aayiram Kaal Mandapam) inside this temple, which is architecturally beautiful with 1008 Shiva lingam idols. This hall was also built by the Vijayanagara kings. Pachaiyappa Mudaliar seated on a horseback can be seen in the temple pillar. The temple consists of ten pillars in its Prakaram (inner corridor) of this temple which is said to produce ten different musical sounds when it is hit with a stick. Temple consists of four theerthams named as Siva Gangai, Kambai Theertham, Sarva theertham, Ulagani Theertham. The Walls are constructed by strong stone walls.

Once in thirukkailayam, Umai - Parvathi hiding from behind closed the eyes of Lord Shivan. As a result of this, the entire world was surrounded by darkness. After realizing this, Parvathi felt that she has made a mistake and asked towards Shiva Perumaan the way to get out of her mistake. Shiva Perumaan asked her to perform the 32 Dharmas in Kanchi, worship him and she can get out of her sin. As said by Perumaan, Parvathi Devi came to Kanchi and performed the 32 Dharmas, worshipped the Perumaan thereby got out of her sin. The 32 Dharmas includes Deva Yagam, Pithru Yagam, Bhootha Yagam, Maanida Yagam, Pirama Yagam and Donating for poor, construction of Madams for Rishis, Pushkaranis, flower parks, helping the disables, taking care of kids, Ko Dhanam, Kannika Dhaanam, creation of Shiva bhakti, helping the Sivanadiyars and more. The temple was Built From Thirugnanasambandar, Thirunavukkarasar and Sundarar (7th – 8th Century C.E) have visited and rendered Thevaram Hymns for the lord here. Initially temple was bulit by by Pallavas. The Vedantist Kachiyappar served as a priest at the Ekambareswarar Temple. The present structure then was pulled down and remodeled by the later Chola Kings. Adi Shankaracharya at the 10th-century saint got Kanchipuram remodelled alongside growth of this temple alongside Kamakshi Amman temple and Varadaraja Perumal Temple with the help of native rulers.

Lord Rama can be seen in wedding posture

The District Science Centre is an educational and scientific institution in the Sathuvachari area of Vellore, Tamil Nadu.