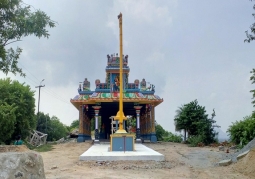 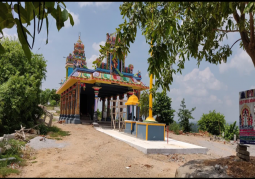 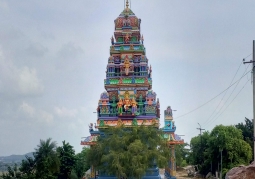 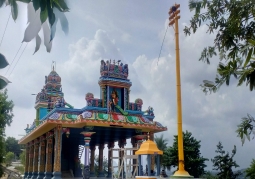 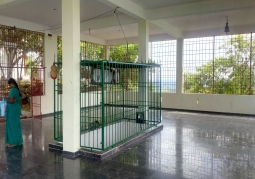 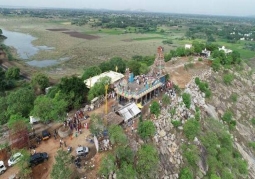 By worshipping the Lord as Jnana Panditan, one obtains jnana. The temple faces East direction and Built in Pallava style of architetcutre. The Temple has a architect plan for gopuram in 2018. Present there is no Gopuram and the temple has a Dhwaja Stambham. The inscription found on a rock above an eternal spring says that Kalingarayan (1322-1340), son of Sambuvaraya Pazhayariayar sculpted steps on the hillock to reach the temple of Sri Gnana Panditaswami. In 1998 some local people along with Archeological Department officials discovered a worn stone inscription. A small mandapam for the devotees in front of the sannidi with Tall Pillars. In the first pillar outside sannidhi, there is a sculpture of Paalai Sidhar. There will also be two small stone mandapams for pilgrims to rest on the way up and one at the foot of the hill as well. The renovation committee has built a hall around the foot print for devotees to meditate. Near the temple ther is a small natural water source from which water is brought for temple abulations.

After Lord Muruga’s wedding to Valli both of them are believed to have spent time here at Murugan Gnanamalai frolicking and the footprints found here are said to have been made by them. Arunagirinathar came to Jnanamalai and recalled his experience of being hated by his wife, own family members and local folks, decides to end his life and at that time Murugan shows his lotus feet and bless him. This internal evidence of the saint's life is found only in the Tiruppugazh of Jnana Malai.

In the 18th year of King Sambuvarayar's rule, his son Prince Kaligarayan established steps to reach Jnanamalai of this village. Campuravayars Raja Narayanan-I and Raja Jarayanan-II. Sri Krishnan is well supported in this cause by philanthropists who have come forward to lay steps to reach the Hill and built a guest house at the foot of the Hill. Jnanasramam trust, proper steps have been built to the hilltop. Saint Arunagirinathar had visited this temple during 15th century and has sung songs praising the lord Muruga. RadhaKrishnan, tiruppugazh scholar and Murugan researcher. The author of several books on the subject, he thinks the ‘discovery’ of Gnanamalai, its development and consecration mark a milestone in his journey. On learning about an inscription on a rock of Gnanamalai, V. Muralidharan of Tiruvannamalai visited the spot. He came back with details, which made Krishnan go there for investigation Convinced that this was the hill Arunagirinathar mentioned in the hymn, he set about the task of making it known to the public. The temple was Built by Pallava Kings and this temple built from 14th century recent renovation is done in 2000.