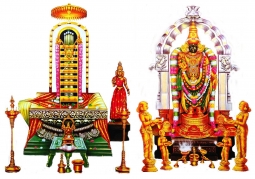 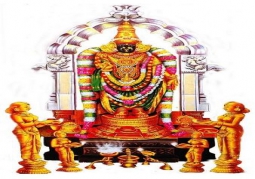 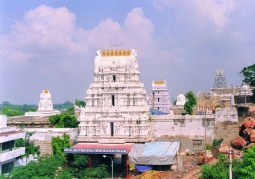 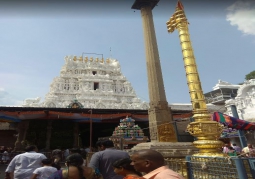 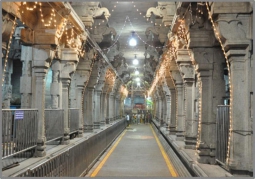 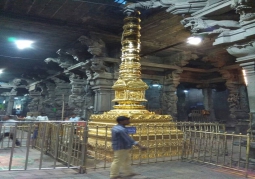 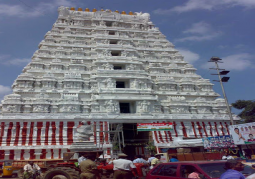 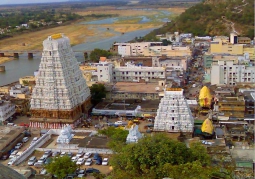 This temple faces South, whereas the sanctum faces the west in the temple. Sri Kalahastheeswara swamy temple is built in Dravadian style of architecture.

Gopuram - Huge white architecture with three lofty gopurams speaks volume for its construction that dates back to Krishnadevaraya and Chola dynasty. The southern gopuram was constructed in the 12th century by Kulothunga Chola. It is said that the Bikshala gopuram was constructed by Devadasi Bichchalu and the construction was done during the region of Yadava Narasimha. Krishnadevaraya built a huge gopuram in 1516, a few feet away from the entrance to the temple. The entrance to the temple is crowned with a smaller tower. This ancient gopuram over the main gate, which is 36.5 Meters (120 feet) high and the entire temple is carved. The style of architecture is a mixture of different regimes ruled the city from time to time. It is an architectural wonder that the 120 feet main tower called Rajagopuram, which was built by the Vijayanagara King Krishnadeva Raya as a commemoration of his victory over the Gajapathi kingdom during the 15th century. There was a bronze idol of the king in the bottom front portion of the tower. Unfortunately, there was a crack found in the tower 25 years ago, developed as a vertical fissure and the tower collapsed in may 2010. A new more taller tower has been built on the still strong base and the consecration ceremony was conducted during January 2017. There are five stages of huge prahara walls. This lithic record is inscribed on the western wall of the second prakara (corridor) and is dated to saka year 1438 (that is, 1516 CE).

Dhwaja stambham -  The Golden flagstaff is located outside the main entrance, beside this Dhwajastambham a huge Depastmabham is placed. In Gabhagudi there is a lamp inside the inner sanctum that is constantly flickering despite the lack of air movement inside. The air can be observed even when the priests close the main deity room, which does not have any windows. When all the lamps in the sanctum glow steadily, one can notice two lamps flickering now and then, proving the lord's inhalation and exhalation. The marks that correlate the legend are still visible on the lingam, which is a swayambhu (natural).

Mandapams - There are two large halls namely Sadyogi Mandapa and Jalkoti Mandapa. While in the 12th century AD Veeranarashimha Yadavaraya contributed to the construction of the temple by constructing the compound wall or Prakara and the four Gopurams. The Mantapams and Galigopurams facing east were developed by the Vijaynagar rulers in 16th century. In 1516 A. D., the Great King Krishnadevaraya built the huge 100-Pillared Mandapa

There are two water bodies associated with the namely, Surya Pushkarani and Chandra Pushkarani. This holy shrine is built in Tribal area, no one has been able to concentrate on temple’s development and growth till 4 and 5 centuries. But due to Pallava’s arrival in South India architectural masterpiece has grown politically and locally. In those days temples are constructed by Timber, reeds and soil in order to prevent temples from quick destroying. Later made up of black stone.

According to Puranas, a Spider (Sri), a Snake (Kala) and an Elephant (Hasti) worshipped the lord here and attained mukti (salvation). Hence the linga is known as Sri Kala Hasti Eshwara. According to hindu mythology the five lingas represent the five great elements namely – Earth, Water, Fire, Air and Space, established in the five great ‘Kshetras’. At Srikalahasti temple Lord Shiva is worshiped as Vayu Linga of the Wind God. Sri Kalahasti temple is famous for the element air and the other four which are Chidambaram (Space), Kanchipuram (Earth), Tiruvanaikkaval (Water) and Tiruvannamalai (Fire).

In the first days of the world, God "Vayu Deva" is worshiped with reverence by the devotion of the Siva (form of Karpura Linga) and he had done thousands of years of penance for the God Siva. The God Siva appeared to Vayudeva, then Vayudeva ask a boon that I should be everywhere in the world, should be the main thing for the living things and the name of your Karpuralingam should be change as my name. The Lord Siva agreed to Vayudeva and fullfill’s his wish.

Srikalahasti derives its name from his ardent devotees :-

In Kritayuga, the spider built a thick web in the form of temple and the walls of shrine in order to worship Lord Siva. The Spider protects deity from external damage by weaving his web and continuously worships Lord Siva. One day Lord Siva tried to test Spider and burnt the temple built by its web using lamp. By looking at this Spider went to swallow the lamp, in the meantime Lord Shiva appeared and offered a boon to him. Then the Spider wanted to make him without birth, so Lord Siva agreed and united his spirit in him. In Tretayuga,the Snake brought precious gems from the underworld and worshiped Shiva every day and an Elephant used to clean Shiva linga by carrying river water with its trunk. The Elephant threw the gems brought by snake, used to worship by placing bilva leaves and flowers on top of Shiva linga. The next day Snake came and saw the flowers, threw them and worshipped Siva with precious gems.This lead to enemity between them, the Snake decides to punish the Elephant by entering its trunk and in the process kills itself, while the Elephant runs and hits its trunk and head against Shiva linga. Lord Siva impressed with their devotion provided moksha to Elephant and Snake.

Legend of Bhakta Kannapa - The hills are closely associated with a legend on a tribal hunter and an ardent Shiva devotee Kannappa. His original name was Thinna, one day he noticed a priest performing Shiva puja and followed it regularly. In course of time,the hunter became so devoted that he started worshipping the lord, offering meat of hunted animals. This infuriated the priest, who wanted to teach the hunter a lesson. But the lord wanted to prove that between him and a true devotee, irrespective of caste or creed, nothing else can stand. He decided to enact a divine drama. One day, an eye of the lord started bleeding. The devout Thinna, unable to withstand this, gorged out one of his eyes and offered it to the lord. The bleeding stopped and Thinna was extremely happy. But the lord apparently wanted to test his devotion further. The second eye started bleeding now. Thinna was such a staunch devotee that without any hesitation, he scooped out his second eye also, holding the lords bleeding eye with one of his feet. Moved by this act,Lord Shiva appeared before Thinna,called his devotee by the name Kannappa (Kan in Tamil means eye) and gave him Mukti (salvation).The priest, who witnessed this high drama hiding himself in the neighbourhood realised what true devotion is. In commemoration of this legend, the hill was named after Kannappa and he is immortalised as one of the 63 saivite saints (63 Nayanmars).

Legend of Swarnamukhi river - Original name for Swarnamukhi is as Uttara Vahini as its course was changed as per the request of sage Agasthya Swarnamukhi river flows from South to North. Agastya Mahamuni along with his disciples came to the South shore to perform meditation for water. Brahma got impressed with his Tapasya and fulfilled maha muni’s wish. Gangadevi takes the form of Suwarnamukhari Sravanthi in the Agastya mountain, flows from South to North and joins the sea in East. Another interesting story attached with Swarnamukhi river is that, the Lord Brahma took bath here and prayed to Lord Shiva to get rid of the sin of killing children. It is believed that Swarnamukhi river is equivalent to Ganga river, for all rivers “Pushkaralu” comes once in twelve years. But for this river Pushkarulu is celebrated on the day of full Moon in Maghamasam.

Swarnamukhi associated with puranas - Swarnamukhi is associated with Mount Meru. It is said that there was an altercation between Adi Sesha the Serpent God and Vayu the God of Wind. Which caused three blocks to be separated from Mount Meru and they all fell at three different places. One of these places was next to Swarnamukhi river. The other two places were in Trichy and Trincomalee in Sri lanka. In Skanda Purana, it is said that this holy river once flowed with a sound resembling that of gold when struck with a hard piece and hence the name Swarnamukhi for this river. It is also believed that during the time of construction of Sri Kalahasti temple, every evening, the laborers tired from a hard days’ work, would wash themselves in the waters of swarna mukhi river near thetemple. When they would dip their hands in to the water, they would often find gold coins. The numberwould depend on heaps of sand they carried from the river for constructing the temple. Swarnamukhi means ‘one with a golden face’.

During 2nd and 3rd centuries, Syva Nayanarlu Appar, Sunder, Thirugnana Sambandar, Manikya Wachakkar of Tamil Nadu visited this holy shrine and spreaded the temple’s importance and devotion through songs. Shri Adi Shankara Charya also made this temple famous by illustrating Bhakta Kannappa in his Sivananda Lahiri and enshrined Bhuvaneshwari Devi Peetham in this holy place. Many kings contributed to this temple, they include Syva Nayanarlu Appar, Sunder, Thirugnana Sambandar, Manikya Wachakkar, Kulottunga Chola, Veera Narasimha Rayalas, Devadasi Bichchalu, Yadava Narasimha, Sri Krishna Devarayalu, Akkanna and Madananna. The inner temple is constructed around 5th century by the Pallava kings and and completed by the Chola kings in the 10th century, the outer temple was constructed in the 12th century. Temple dome was constructed during Kulottunga Chola's period; Hyma, Girija cave Bhairava cave and Gopara cave were constructed with bricks by the Veera Narasimha Raya.