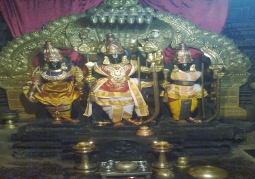 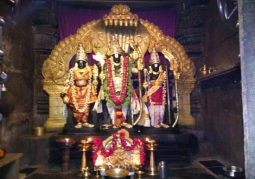 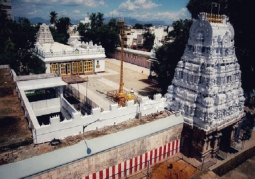 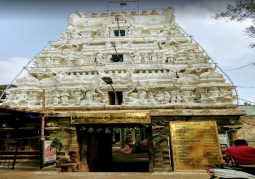 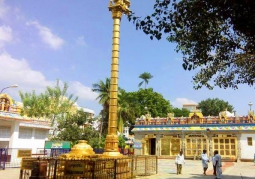 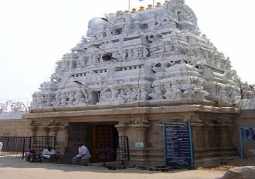 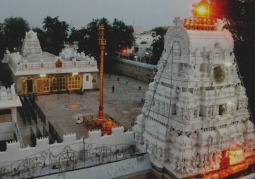 Kodanda Rama Swamy temple faces West direction, built in the Vijayanagara Style of Architecture. Kodanda Rama Swamy temple has a three tier Gopuram with seven Kalasas above on top. The Antarala and Garbhagriha of the main shrine of Kodandarama are at a higher level than the Mukha Mandapa. They stand on a 5' 6" high adhisthana which contains from bottom.

Mandapams - On the rock walls of the Outer Mandapam Raja Mudras and symbols of Vijayanagara dynasty. The outer surface of the Pradakshina wall is plain and constructed with large blocks of Granite stone. The Vijayanagara emblem is carved on the south of the Pradakshina wall. The wall above the adhisthana is decorated with pilasters having Vijayanagara capitals. There are two small four pillared mandapas in the south west and north west corners of the courtyard. This shrine is situated in the centre of the western side of the Maha Mandapa and houses two armed standing Garuda with his hands in anjali pose. This Mandapam contains four pillars. Each pillar has three square blocks with two Octagonal shafts in between. The capitals are in the Vijayanagara Style. There are interesting sculptures on the square blocks of the pillars. The pradakshina round the Garbhagriha and Antarala contains six pillars on the north, two pillars on the east and six pillars on the south. The capitals of all these pillars are in the Vijayanagara style. There is about four feet wide space between the pradakshina wall and the Adhisthana of Garbhagriha and Antarala.

Inscriptions - According to the inscriptions, Sri Narasimha Mudiliar constructed this temple in the year 1402(1480A.D). The idols were consecrated and in later days the emperor Janamejaya renovated this temple as per the evidence available in “Sawal Jawab Patti”.

According to legends, after the war and 14 years of exile,when Lord Rama, Goddess Sita and Lord Lakshmana were returning to Ayodhya, they had stayed at this place for a night. Jambhavanta, an elderly wise Vanara in the kingdom of Sugreeva once saw a cave here and the brightest light was coming out of the cave. He asked Lord Sri Rama of what it was. Lord Rama said, it is the light of God. Jambavanta then established God’s idol there and worshiped him. By this legend, this temple is said to have been in existence since Treta Yuga in which period Lord Ram lived. According to Varaha Purana, during Tretayugam, Lord Sri Rama resided here along with Sita Devi and Lakshmana on his return from Lankapuri.

This temple was constructed by the Cholas in 10th century A.D. Developed by various Kings especially by Sri Krishna Deva Raya in 15th century. Jambavan consecrated the idols in the temple and later that was renovated by Janamejaya in the local Ramachandra Pushkarini(a sacred tank).