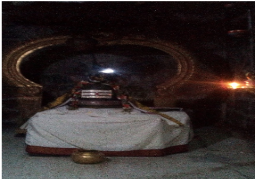 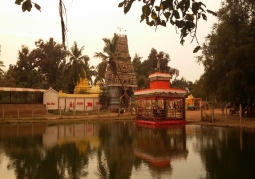 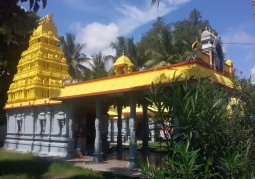 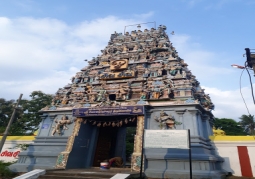 Shiva was in the midst of kalli trees and so the name of the place is called Tirukallil, he is called Tirukalleeswarar. Temple is facing East direction and built in Pallava style of architecture. This temple has a huge Raja gopuram with 5 tiers, Dhwaja Stambham is placed infront of the temple. The Vimana (roof tower) of the sanctum sanctorum is designed in the “Gaja Brishtam” style a form of architecture that is exclusive to the Pallava dynasty. In this style, the roof top looks like the rear of a sleeping elephant (Gaja meaning elephant and brishtam meaning rear). This is also called as “Thoonganai Maadam” in tamil where thoong (um) means sleeping, Aanai means Elephant and maadam refers to the top of a temple. Inscriptions from the Chola, Pandya and Vijayanagar emperors are seen here. There are many inscriptions found at the base of the sanctum of that one belongs to Vikrama Chozha. Nandhi theertham / Sivananda theertham are located in front of the temple.

The legend is that Saint Thirugnanasambhanthar came to Thirukkallil after visiting Thiruvenpakkam, another Paadal Petra sthalam. When he was taking a dip in the Kushasthali river, his belongings a pooja box and vibhoothi (sacred ash) bag went missing. Searching for his belongings, he found a Shiva lingam in the midst of kalli trees with his missing items near it. In his pathigam, he sang of the lord of this temple “Lord Sivanandeswarar” as a thief (Kalvan).

Sage Brugu worshipped Lord Shiva here : Sage Brugu has the habit of worshipping Lord Shiva only. He went to mount Kailash to worship the lord, Lord was with mother Parvathi. The sage worshipped lord only ignoring mother which hurt her, mother sat very close to lord to make the sage worship her also. But the sage took the form of a fly and circumambulated Lord Shiva only. To teach the sage a lesson that Shiva and Shakti are but one, lord granted darshan in the Arthanareeswara form (half male and half female). Yet, the sage still thought that Shiva alone was supreme, the sage then came down to earth on a pilgrimage and reached this place. He worshipped the Shivalinga once worshipped by sage Agasthya with kallil flowers. Lord Shiva told the sage that Shiva and Shakti were inseparable and one power alone could not act. Lord kept mother on his lap and the sage understood the truth, he begged the pardon of Ambica for his folly. Too pleasant with the prayer of the sage, mother said that he would always be in a state of bliss (anandam), hence as bliss boon giver, mother is called Anandvalli. As Brugu worshipped lord with Kalli flowers, he is also named Irukalleeswarar and the place Tirukallil.

Lord Shiva granting wedding darshan to Sage Agasthya: The ground level of north went deeply down due to the weight of the crowd gathered to witness the wedding Lord Shiva and mother Parvathi. Lord Shiva asked sage Agasthya to go to South to balance the earth level equally. Sage Agasthya implored the lord that he should grant him the wedding darshan at any place he asks for. The sage was relaxing at Tirupalaivanam. Lord appeared in the dream of the sage and showed this place. Lord Shiva granted not only his wedding darshan but also the Somaskanda darshan along with Lord Muruga. Agasthya prayed to lord that this darshan should ever be available to all devotees. Granting the boon to Sage Agasthya, Lord Shiva rose from here as swayambu linga and assumed the name Shiva Nandi Easwara.

The temple was built 1000 years ago by Chola kings.