Valli and Deivayanai's are consorts of Lord Subramanya swamy. 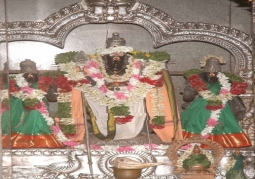 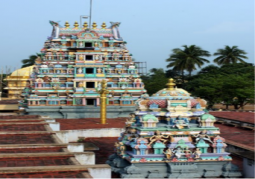 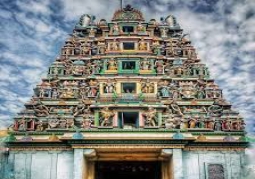 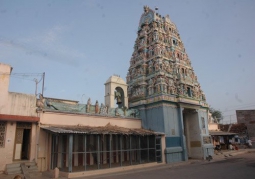 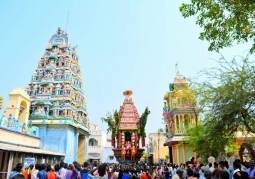 Valli and Deivayanai's are consorts of Lord Subramanya swamy.

Subramanya Swamy temple faces in East direction, built in Dravidian style of architecture. The temple has a 5 tier Rajagopuram on the East and a smaller 3-tiered gopuram on the South direction. Sculptures are artistically engraved in the gopuram depicting the Kandapuranam and the six Padaiveedus of Lord Murugan. Dhwaja Stambham is located at inside the temple premises. The temple walls have some beautiful images of common people and divinity on the top. When Mallaiyadhas Bhagavatar conducted the Kumbabhishekam in 1933, his son Srisailavasan fell from 50 feet but after intense prayer and applying holy ash over him, he just woke up without any injury. An inscription about this incident is present in the temple.

According to legend, Devas prayed to Lord Shiva to protect them from the atrocities of the demons. Lord Shiva created six sparks from his forehead eye. Vayu and Agni took them and left in Holy River Ganga. Six children came from the sparks then and were taken care of by Karthika maidens. Mother Parvathi then came there and embraced the children together which became a single child with six faces and named Kangeyan. Lord Murugan graces in this temple with this name. This temple built from 500-1000 years old and recent renovation is done in 1933.

Thiru Muruga Kirupananda Variyar is contributed for this temple. Murugan devotee Malayadasar, father of Sri Kirupananadavariar, popular spiritual leader of Murugan cult during our times, approached one Lokanathar known as Tirupugazhswami in Tiruvannamalai seeking his help to construct a tower to this temple. Malayadasar was asked to come next year for the purpose. When he went again, the Swami gave Malayadasar one rupee with Vibhuti prasad and advised him to start the work. Work progressed with the grace of god and the tower construction was completed successfully. When saint Arunagiriar came to this place, after completing his pujas, offered curd rice as nivedhana to lord. Six Murugan devotees came there at that time to whom the nivedhana was given. It is believed that Lord Murugan himself came as the devotees to have the nivedhana. Based on this event, even today curd rice nivedhana offered to Lord Murugan each day are offered to six devotees with Annadhaana feeding.