The main diety of this temple is Sri Vaikuntha perumal. Here Lord is incarnation Lord Vishnu and facing East direction. 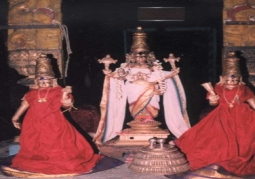 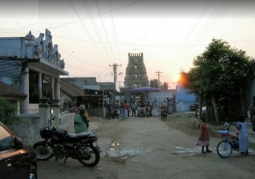 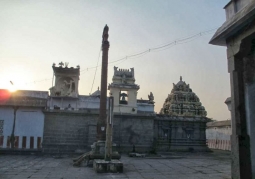 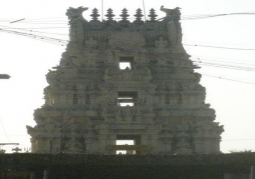 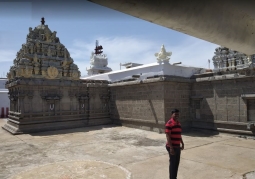 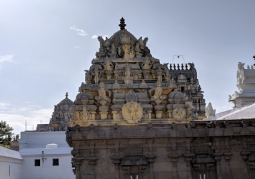 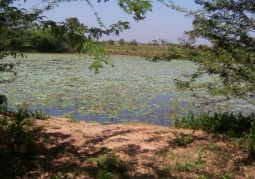 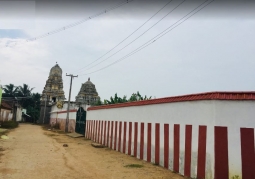 The main diety of this temple is Sri Vaikuntha perumal. Here Lord is incarnation Lord Vishnu and facing East direction.

The temple has a 3 - tier raja gopuram facing East direction and built in Dravidian style of architecture.

An Amsam of Garudalwar incarnated as first son of Kamalanayana Bhattar and Srimathi Periya Pirattiyaar in Krothana Nama year, Thai Month, Punarvasu Nakshatram at a sacred place called Maduramangalam, also called as Then Madhura. He was named as Govinda Dhasar and he had a younger brother named Siriya Govinda Perumal. Sri Embar was related to Ramanuja, as his cousin brother and had great Bhakthi and regard for him. Both Ramanuja and Embar were initially learning Vedantha under an Advaitha Acharya named Yadhava Prakasha. On many occasions arose when the Saivite Guru clashed with Ramanuja, when the Guru misinterpreted Vedantic statements. Ramanuja fearlessly pointed out the errors in the Guru's interpretations and corrected him. This enraged the Guru. Fearing that one day, Ramanuja would demolish Advaita philosophy, he plotted to kill Ramanuja and hence he planned a pilgrimage to Kashi, thinking that they can kill Ramanuja on the way in the forest and clear the sin by taking a holy dip in Ganga. At this point of time Embar somehow came to know about his master’s evil plan and saved Ramanuja’s life. Embar was a Shiva Bhaktha earlier in his life and later accepted Srivaishnavism due to the intervention of Sri Ramanuja and Sri Thirumalai Nambigal and became a great Acharya. He was given the title of "Embar" by Sri Ramanuja himself. Embar is the shortened version of the term Emperumaanar. Sri Embar is referred to as the “Ramanuja padhachhaaya” (shadow of the lotus feet of Bhagavath Ramanuja).

The temple is praised by saint Sundarar in his Thevaram hymns

The Temple is famously called as the Kailash of South India

The boulder is 6 meters high,5 meters wide,weighs around 250 tons

One of the finest testimonials to the ancient Vishwakarma

Nestled on the Coromandel Coast of Bay of Bengal