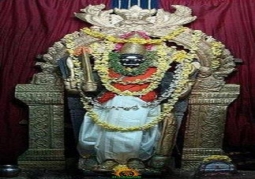 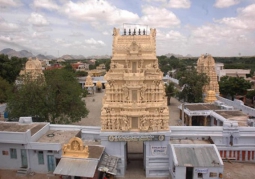 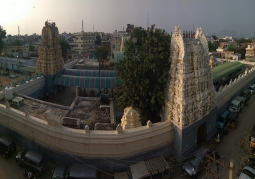 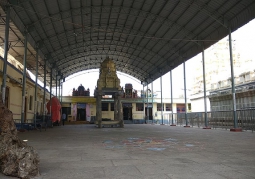 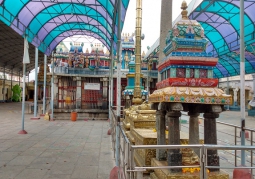 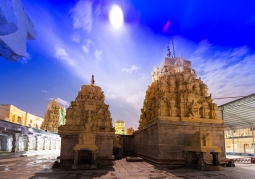 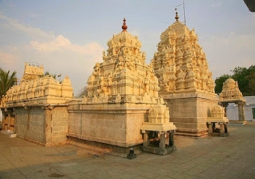 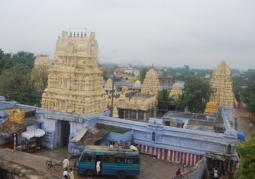 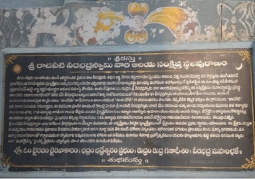 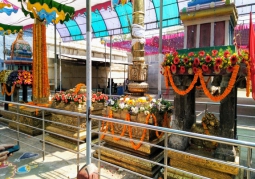 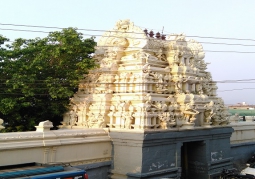 Veerabhadra Swamy manifestation of Lord Shiva's wrath. Veerabhadra is Shiva in ferocious mood, indeed Shiva manifested himself as Vira. This fierce warrior's story is simply a symbolism of ego-shedding. He is a form of Rudra-Shiva who created him to act as his henchman in his quarrel with Daksha. Veerabhadra Swamy temple facing towards East and constructed in Vijayangara style of architecture. The temple can be seen with three major gopurams, three gopuras at East, South, North sides to temple. East facing gopuram is three tier with 5 kalasas, sculptures of hindu god and goddess on it. Highlight of this temple is the very tall single rock cut Dhwajasthambham out side main entrance. Daksha Prajapathi appears in worshiping form near the lord in the sanctum sanctorum.

The outer walls of the temple are sculpted with various images. In the texts and scriptures, the scared spot name is cited as Rajaveedu. Interesting are the Nandis and the figures carved on the floor of the mandapam before sanctum. Vijayangara style temple having broad mandapa and exquisitely carved deities inside. The sacred spring is the Mandavya theertham. The Medieval brick gopurams of the Vijayanagara era are now replaced by modern cement structures.

Daksha Prajapathi organized Yagna (Homam) without inviting Lord Shiva purposely to humiliate him. On knowing this, Sati or Dakshayani, youngest daughter of Dakshan want to visit her father’s house after taking permission from Shiva. Sati was not received properly at her father’s house. Daksha then went on insulting Shiva, after seeing all these events, sati turned furiously and set ablaze at the Yagna mandapam itself. On knowing this Lord Shiva burned with anger and tore a lock of hair. Lord Veerbhadra took birth from Lord Shiva’s anger and went to execute Shiva’s will along with Shiva ganas to destroy Daksha’s Yagna. Meantime, Mandavya maharshi doing penance on Shiva for Veerabadhra Darshan. Maharshi begged Ambica to soften Veerbhadra, Ambica appeared as Bhadrakaali and cooled him down. Sage requested them to stay in the place of his penance. That place is now called Rayachoti. The temple is in the town of Rayachoti (old name Rachaveedu).

Legends of the Place - According to the legends, Daksha did not invite Lord Shiva at the Yagna conducted by him. Knowing about this, Sati went to the yagna uninvited even when Lord Shiva asked her not to go to the yagna. Sati reached the yagna place and asked her father Daksha the reason for not inviting Lord Shiva while Daksha invited all other Gods. Daksha insulted Lord Shiva and Sati became angry and felt sad for not obeying Lord Shiva. Sati immolated herself. Hearing about the death of Sati, Lord Shiva became angry and plucked a lock of hair from his head and smashed it on the ground, breaking it into two with his leg. From it emerged, Lord Veerabhadra and Bhadrakali. Lord Shiva ordered Veerabhadra to destroy the yagna and kill Daksha. Veerabhadra killed Daksha.

Veerabhadra Swamy temple was built in 12th century A.D. by Nissankapratapa Raya, lord of Karkatapura. The renovation work of this temple is recently completed and it is attracting devotees in large numbers from all over the states. Vijayanagar kings was contributed for Veerabhadra Swamy temple. Krishnadevaraya of Vijayanagar used to visit this temple to offer prayers.

Sri Rama’s Drawing Anjaneya on a rock with arrow.