The main deity of this temple is Lord Sangameshwara who is an incarnation of Lord Shiva. 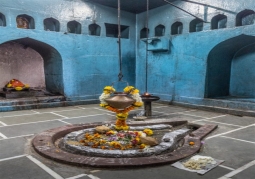 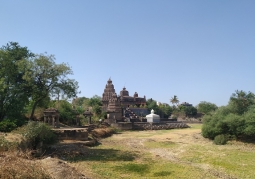 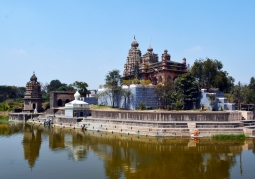 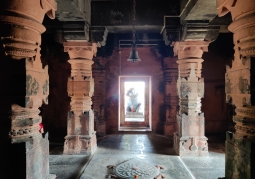 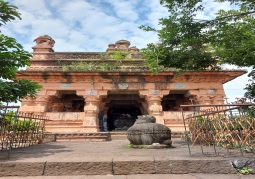 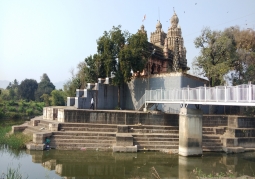 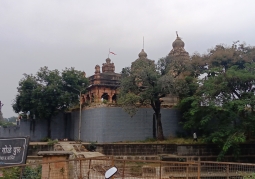 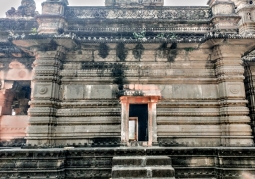 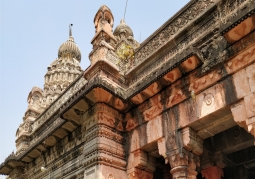 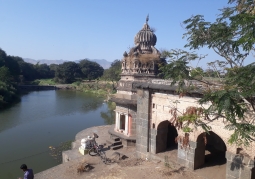 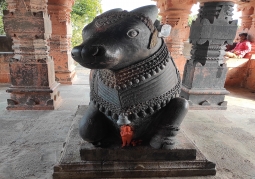 The main deity of this temple is Lord Sangameshwara who is an incarnation of Lord Shiva.

Temple is built in the typical Hemadpanti style of architecture (style incorporating black stone and lime without using any mortar using the technique of mortise and tenon joint). The temple is a mix of old architecture, one assumes possibly original, plus later modifications and renovations. The temple’s Shikhara (dome) has literally hundreds of small sculptures of deities carved in consecutive layers. Although now badly weathered, you can still make out these figures on both the main temple and other peripheral buildings. The main temple has two deepmalas on either side and an unexpectedly large and colourfully painted Nandi in the middle of the temple hall. Further within the temple, just outside the sanctum sanctorum sits Lord Ganesh and other guardian deities carved in the niches of the sustantial walls. The garbhagriha is a somewhat dark roomed cellar, with a lone diya over the Shivling. Goddess Parvathi and Lord Ganesha in the background with a picture of Saint Sopandev painted on the sidewall. The sanctum room is far from silent, a chant is playing in a repetitive loop with accompanying sounds of small bells chiming. A smaller partially damaged but life size Nandi carved out of black stone lies immediately in front of the temple.

It is believed that the origin of this ancient Sangameshwar temple can be traced back to the Pandavas. Historical and religious references are conclusive that the Pandavas resided in this place in their exile. During their stay here, it was observed that there was a severe water crisis in this region. Lord Krishna who had accompanied the Pandavas noticed Lord Brahma sitting nearby deep in meditation having a kamandalu that was full of water. Lord Krishna quickly asked Bheema to bring that kamandalu and suggested that a river can be made to flow from the water flowing out of the kamandalu. Bheema enthusiastically went up to Lord Brahma to request him to part with the water in the kamandalu but Lord Brahma was blissfully unaware of the surroundings. Bheema in an effort to get his attention poured cold water on his head. Lord Brahma quick to anger at this impertinence of Bheema chased him and, it was during this flight of Bheema that the Shiva Lingas were created in five spots to appease Lord Brahma and seek the blessings of Lord Shiva and the birth of the river Karha named after the kamandalu of Lord Brahma called Kara occurred.

The temple was built in 10th century A.D.

It was constructed in Indo-Islamic style of architecture

This temple was constructed in Islamic Style of architecture

Temple was build in around 18th Century during the Peshwa rule

It is home to biggest holographic installation in India

Peshwa palace fort built in the 1740s, with a main gate big enough to let elephants pass through

This fort was support Maharashtra during the ancient battle

It has models of various birds and famous for boating