Lord Grishneshwar is the main deity of this temple, who is an incarnation of Lord Shiva. Here deity is in form of Shivalinga facing in East direction, which is self manifested. 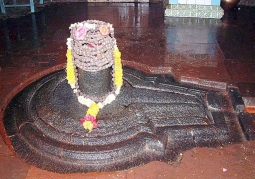 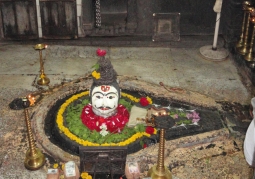 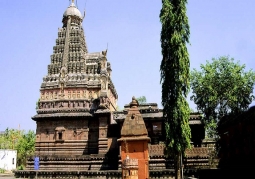 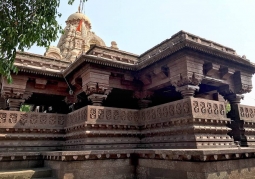 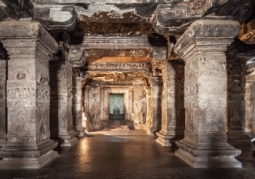 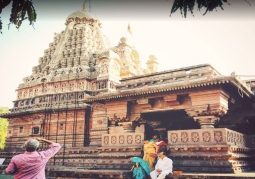 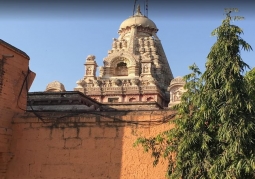 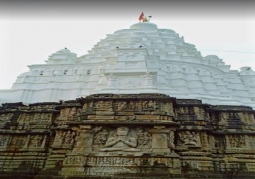 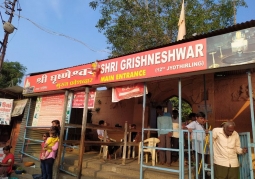 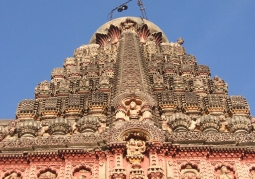 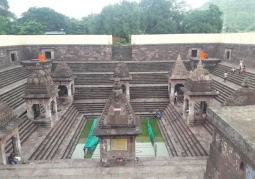 Lord Grishneshwar is the main deity of this temple, who is an incarnation of Lord Shiva. Here deity is in form of Shivalinga facing in East direction, which is self manifested.

The Grishneshwar Temple is carved out of red stone and is a treat for lovers of ancient architecture. History lovers would find the temple engrossing as several rock carvings of Maratha heroes are preserved beautifully in the temple. Devotees and visitors find the brilliant five-tiered Shikhara (temple tower) amazing. The Shikara also includes intricate carvings of the Dasavathar, which appear resplendent in the red volcanic rock. Devotees also marvel at the statue of Nandikeshwara that adorns the court hall.Ghrishneshwar Temple has five tier Shikara and is 240 x 185 feet long and constructed with South Indian Style of architecture. The Garbhagriha measures with 17 ft x 17 ft. and we can see the marriage scene of the Lord and his consort in the temple murals and carving. The Grishneshwar temple also houses a well that springs holy water. A court hall is built on 24 pillars and On these pillars there are wonderful carvings. The temple premises is very spacious, surrounded by a large wall on all the four sides and lot of art work can be seen on the walls. The walls have holy inscriptions, other messages that are beautifully carved on them and Red rocks are mainly used for the construction of the temple.

According to the Shiva Purana, several legends are associated with this ancient place of worship:

Legend of Shivalay - The legend of Shivalay states that during his hunting expeditions, the king of Verul killed animals living in the hermitage of Rishis. This angered the Rishis who cursed the king and insects swarmed over his body. The king wandered in the forest and came across a hole with water flowing from it. The moment he started drinking the water, the insects miraculously vanished from his body. The overwhelmed king did severe penance in that place. Pleased with the penance, Lord Brahma blessed the king and created a lake that came to be known as Shivalay.

Legend of Kumkumeshwar - Lord Shiva and his consort Parvathi were residing in the Sahyadri range, near Shivalay. One day, when the Goddess was about to apply vermilion, she mixed it with the Shivalay water. The vermilion then transformed into a Linga, emitting a radiant ray of light. Since the Linga emerged from the vermilion, this Jyotirlinga was initially called Kumkumeshwar. But the Goddess named it Grishneshwar since she believed the Linga came from the rubbing action, and the word Grish means friction.

Legend of Ghushmeswar - A great Brahmin scholar, Brahmavetta Sudharm and his wife, Sudeha, lived in the southern mountain of Devagiri (later known as Daulatabad). They were childless, and an agonized Sudeha persuaded her sister Ghushma to marry Sudharm so that they could have a child together. Eventually, Ghushma and Sudharm had a son much to the envy of Sudeha. The boy grew up to be a handsome young man and eventually got married. Unable to cope with jealous feelings, Sudeha killed the boy when he was asleep and threw the body into a lake. A deeply grieving Gushma continued with her routine. During her morning ritual of visiting the lake where she usually made and worshipped a hundred Lingas, she saw her son emerging from the lake. Then Lord Shiva appeared before her and said that Sudeha had killed her son. Pleased with Gushma’s devotion, he gave back her son and also granted her a boon. Then Ghushma requested the Lord to forgive her sister and also to remain in the place. The Lord accepted her request and continued to reside there in the form of a Jyotirlinga. Hence, he took the name Ghushmeswar in Gushma’s honor.

The temple structure was destroyed by the Delhi Sultanate in 13th and 14th-century. The temple went through several rounds of rebuilding followed by re-destruction during the Mughal-Maratha conflict. It was rebuilt in the current form in the 18th century under the sponsorship of queen Ahilyabai Holkar of Indore, after the fall of the Mughal Empire. The history of Grishneshwar temple speaks of Maloji Bhosle, an ardent devotee and chief of the Verul village. He built the temple in the 16th century after he found a treasure hidden inside an anthill. Rani Ahilyabai Holker, Queen of the Maratha Malwa Kingdom, renovated the temple in the 17th century.

It is one of the remarkable cave temples in the world

It is world famous for the largest single monolithic excavation

This fort is one of the 'Seven wonders of Maharashtra'

The Mausoleum is covered with marble up to the Dado level

This Sanctuary is one of most Famous for Trekking