Trambakeshwar is the main deity of this temple, who is an incarnation of Lord Shiva. Here deity is in form of Shivalinga, which is self manifested. 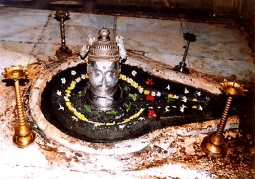 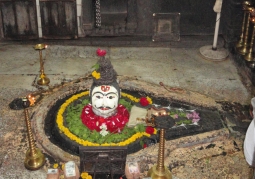 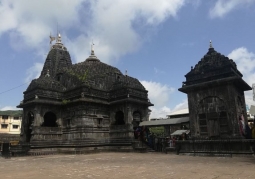 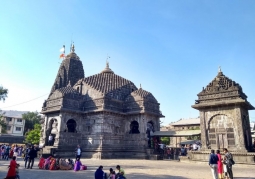 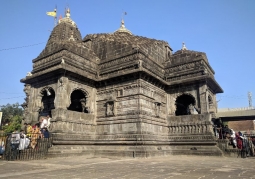 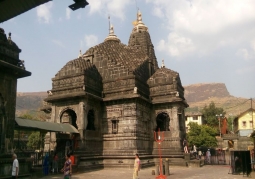 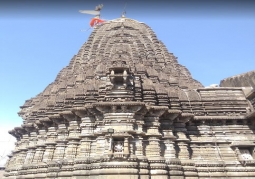 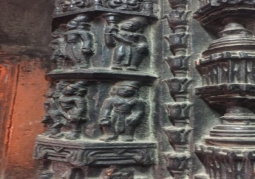 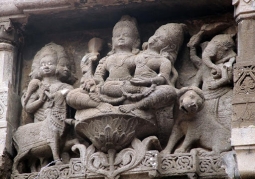 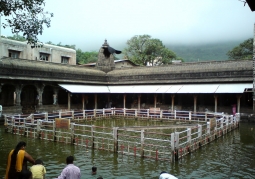 Trambakeshwar is the main deity of this temple, who is an incarnation of Lord Shiva. Here deity is in form of Shivalinga, which is self manifested.

The Linga present here is called as Trimbaka or Trayambaka. It is named so because it contains three Lingas (small thumb-sized) representing Brahma, Vishnu, and Mahesh. Some people also believe that it is because Lord Shiva has three eyes. This temple was built in East direction and constructed in Nagara Style of architecture. The temple has a high Shikhara which is internally a square, this Shikhara has a gaint amalaka which is a lotus shaped disk made up of stone and On the top of amalaka is the golden kalasha. Inside the temple one can see a garbhagriha which is the innermost part of any temple where the Lord resides and has a temple kund. An entire temple is built with black stones which enhances its architecture. The temple is edged with around 20-25 stone feet wall in height.

Trimbakeshwar temple is very ancient. A small pit inside the temple has three small Shivalingas. These three Shivalingas are known as Brahma, Vishnu and Shiva. Three mountains are located near the Trybankeshwar temple, which are known as Brahmagiri, Nilgiri and Ganga Dwar. Brahmagiri is considered the form of Shiva. On the Nilgiri Mountains is the temple of Neelambika Devi and Dattatreya Guru. There is a temple of Goddess Godavari or Ganga on the Ganges Gate Mountains. Water keeps dripping from the feet of the idol, which accumulates in a nearby reservoir. The three Lingas of Brahma, Vishnu and Shiva are usually covered with a silver crown depicting their faces. However, on special occasions like Mahashivaratri, Karthik Purnima and Dussehra, a golden crown studded with diamonds and rubies is kept over the three Lingas. It is believed that the Peshwas donated the crown to the temple and that the crown actually belonged to the Pandavas.

It is believed that Trimbak was a land of sages and munis, Gautam Rishi was one of the Rishis who lived here with his wife Ahilya. The land was struck with a massive drought and so Gautam Rishi requested the Lord of water God Varuna to solve the problem of water scarcity. God Varuna accepted his prayers and gave him an unlimited supply of water. However the other Rishis became jealous of Gautam Rishi. So, they prayed to Lord Ganesha to send a cow to Gautam Rishi's field which was rich with crops. When the cow went to Gautam Rishi's field he tried to frighten it, but somehow the cow died. After this he went to Lord Shiva along with his wife to seek punishment for the crime he committed. Lord Shiva was very pleased and then he ordered river Ganga to come down on earth. The river flowed from Brahmagiri Hill and Gautam Rishi also trapped it in a Kund which is called as Kushavarta, then the Rishi requested Lord Shiva to reside there. Accepting his request the Lord turned into a Linga to stay there.

Trimbakeshwar Temple was built in 1755 by Shrimant Balaji Bajirao alias Nanasahib Peshawe, renovated in 1786 and Maratha rulers are the contributors for this temple.

Mandir was constructed in Rajasthan style of architecture

It appears to be rectangular in shape from its base village

Koroli hills has the first trekking institute of Maharashtra

It is popular for swings,slides and roller coasters

It is one of the most favorite Hangout places of Nasik

Gargoti Museum is famous for its collection of Zeolites