Cheluva Narayana Swamy is the main deity of this temple, who is an incarnation of Lord Vishnu. Here deity is 6 feet in height and self manifested. The standing posture of Lord gives blessings with one hand and held a club, a disc and a conch shell in his other three hands.

Yadugiri Nachiyar is the consort of Lord Vishnu, who is an incarnation of Goddess Lakshmi. 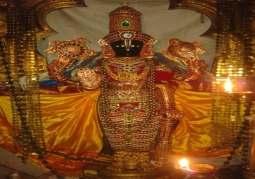 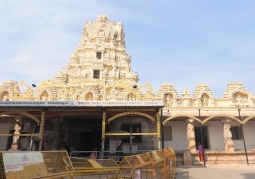 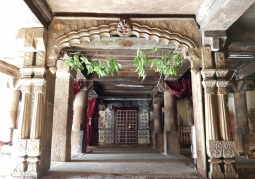 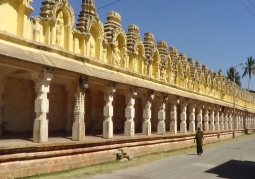 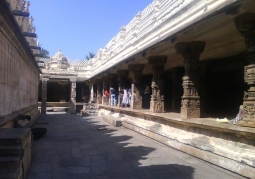 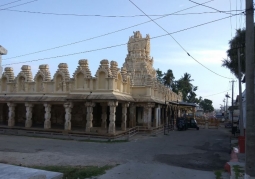 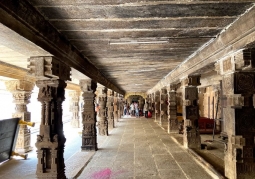 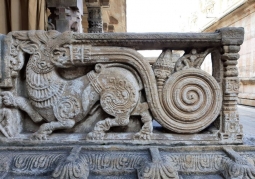 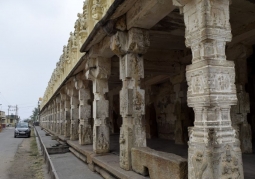 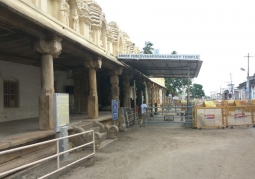 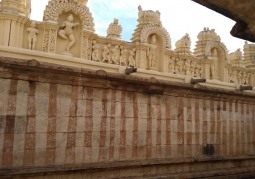 Cheluva Narayana Swamy is the main deity of this temple, who is an incarnation of Lord Vishnu. Here deity is 6 feet in height and self manifested. The standing posture of Lord gives blessings with one hand and held a club, a disc and a conch shell in his other three hands.

Yadugiri Nachiyar is the consort of Lord Vishnu, who is an incarnation of Goddess Lakshmi.

The Utsav murthy (metallic procession idol) representing the deity is referred as Cheluvapille Raya whose original name appears to have been Ramapriya. It is believed that the utsav murthy was worshipped by Lord Rama and his son Kusha, hence the name Ramapriya. Cheluvanarayana in Kannada means, A very Handsome Narayana. Sri Cheluvanarayana Swamy Temple is facing in East direction and the Gopuram of the temple reflects, Mysore Vudayar type of architecture. The Rajagopura is an incomplete structure leading to the Melukote hill, which is a scenic place and people can see the aerial view of the surroundings. A stone cut inscription of a beautifully adorned temple elephant with bells on its side, it is said that Tipu Sultan had gifted elephants during his reign of Mysore, Statue of Yoga Narasimha on one of the granite pillars and a huge Dwajastamba (a pillar), which was made out of a single rock. The temple walls are Shadowed recesses, moss grown masonry walls, outer walls of the entire temple have a pillared corridor. The deity of Ramapriya is in the Ranga Mandapam hall in front of the sanctum and Outer walls of the entire temple have a pillared corridor, where these pillars have intricately carved sculptures decorated on them. On one of the pillars of navaranga of the Narayana swami temple is a bas relief about 1.5 feet (0.46 m) high, of Raja Wodeyar, standing with folded hands, with the name inscribed on the base. Before the main sanctum of Sri Cheluvanarayana, is a pillar with the structure of Garuda carved out. The block-shaped stone steps have arched pillows, for tourists to lean on them and take rest.

Pancha Kalyani Pond : The pond is very big with mantaps, Bhuvaneshwari mantap is located here. Kalyani Pond, the chief of several sacred ponds in Melukote by sprinkling some of its water on our heads.

Sri Vaishnava Saint Ramanujacharya came to Melukote and settled here for 12 years. During this time, the temple became a popular Vaishnavaite shrine, Deity was worshiped by Sri Ramanujacharya. On one of the columns of navaranga is a bas relief of Raja Wodeyar. This name is etched on the base, he was said to be a great devotee of the presiding deity and a constant visitor to the temple.

Puranas reference : The main presiding deity was worshipped Sri Cheluvanarayana Swamy by lord Dattatreya in kritayuga and acquired the name Vedadri. In Tretayga it was Known to Narayanadri followed by the name Yadavadri since the deity was worshipped by Sri Krisana & Balarama. In the NaradiyaPurana sages ask Narada Muni how Lord Narayana came to this place. He tells them that the deity was first presented to Brahma to worship and Brahma gave the deity to Sanat kumara one of his sons. Lord Visnu then ordered Ananta Sesa, the lord of the serpents to assume the form of a mountain at Melukote and wait for his arrival. Sanat-kumara transported the deity with his entire temple complex to Melukote. Later he presented the deity to Lord Rama. Rama's son Kusa gave the deity as a dowry for his daughter, who married a prince of the Yadu dynasty.

History of Vairamudi Brahmotsava : Vairamudi the diamond crown was stolen from Sriman Narayana when he was asleep at his abode in the Ksheera Sagara (Milky Ocean) by Virochana. Virochana was the kind of demons and the son of Bhakta Prahlada and Garuda was asked by the lord’s devotees to bring back the crown. Garuda went after Virochana to the neither world, fought with the demon king and flew back with the crown. According to the legend it is believed that Vairamudi lost its blue gem on the crest while Garuda was bringing it. The blue gem is believed to have fallen near Nachiar Koil, a temple town in Thanjavur district of Tamil Nadu. The gem turned into a stream, called the Manimuttaru, which to this day flows in Thanjavur. On his way, he saw Bala Krishna playing with his friends in the mid day sun at Brindavana. Garuda protected the Bala Krishna from the sun by placing his wings as the shade & placed the crown on his head. The local legends of Melkote claim that Krishna presented Cheluva Narayana with this crown.

Lord Narayana came to Melukote hill in response to a penance performed by Brahma. Lord blessed him and told him that he will assume the form of a divine temple. This is built in 11th Century by Hoysala Kings. Recently, the government of India has taken efforts to renovate the temple and its historical surroundings. Renovated by the great Srivaishnava Saint Ramanujacharya, Mysore Wodeyars. The temple has the most valuable collection of jewels given to the lord by Mysore king Raja Wodeyar. This temple entrance was built by Hoysala King Vishnuvardhana and is said to have been built overnight.

Temple can be termed as par excellence of Hoysala architecture

This temple dates back to 12th Century

Temple is located on an island in the river Kaveri

Legend has that been here during their exile days