Goddess Alampur Jogulamba is the main deity of this temple, who is an incarnation of Goddess Parvathi. Here Goddess Jogulamba is seen seated on the Corpse with scorpion, frog, and lizard on the head. 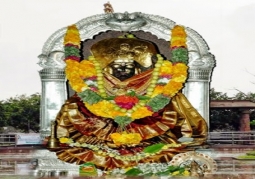 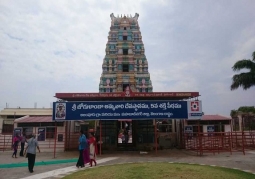 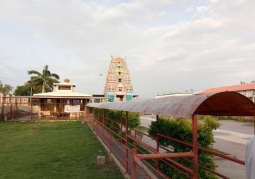 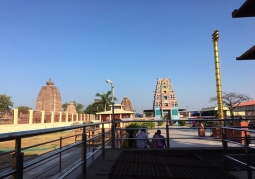 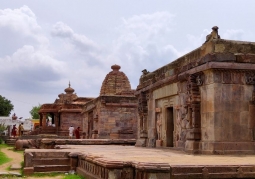 Goddess Alampur Jogulamba is the main deity of this temple, who is an incarnation of Goddess Parvathi. Here Goddess Jogulamba is seen seated on the Corpse with scorpion, frog, and lizard on the head.

It is mentioned that Brahma performed a strict penance here for Lord Siva. Lord Siva appeared before him and blessed him with the powers of creation. Therefore, the name Brahmeswara. Here in this shrine goddess Parvati is known by Yogini or Jogulamba. Sri Jogulamba Devi Temple is facing in East direction and built in Badami Chalukyan style of architecture. A few terms built in Dravidian style of architecture and has a tiered gopuram adorned with colourful sculptures. The Vimana on the Garbhalaya witla Amalaka and Sikhara adorning the same are the chief characteristics of the Chalukyan Architecture. This temple has a Ranga Mantapam and the outer surface of the temple walls are decorated with elegant sculptural desingns. Figures of Dikpalas are fitted in attractive Deva Koshtas (niche) and Kosta Panjaras, Sculptural figures pertaining to Mythology are also gracefully carved there on. The walls Presort a picture of Triloka, the upper part adorned with Khechara Midhuna motifs, the middle part with human Midhuna & the lower to the third showing demonic forms carved with grace and elegance. The temple covers a large portion of land, built magnificently with several carvings on the black stone and flooring is made of marble stone.

Alampur temple is surrounded by beautiful Nallamala hills and is mentioned in the sacred Skanda Purana. This is an ancient hindu temple which was completely knocked down during the Muslim invasions in the 14th century.

Legend : As per the Legends, Everyday Renuka the wife of Sage Jamadagni used to bring water from river Tungabadhra in a new pot which she prepares from the clay of river Tungabadhra for the Pooja of her husband. This power of moulding clay and Sand into a pot was acquired by her due to the power of her great Pathi (Husband) Bhakti. One day, while she was busy with her daily work, she chanced to glance at a king and queen who were bathing in the river. This caused a little amount of mental disturbance in Renuka so she was not able to prepare the pot. She therefore returned Ashram with the empty hands. Sage Jamadagni who was aware of the powers of his wife understood that she had deviated from her pathand therefore ordered his sons to kill her at once. All of them kept quite, but Parasurama alone was dutiful and carried out the cruel order of his father. Sage Jamadagni was pleased with Parasurama’s filial affection and asked him to select any boon. Parasurama immediately asked him to bring his mother back to live. Jamadagni replied him that her head could not be attached to her body as it fell on some impure place and he gave her a boon that the head would be worshipped by the name of Yellamma and the body would also be equally renowned in the name of Bhudevi.

There lived a widow by the name Punyavati in the Holy city of Banaras. She was an ardent devotee of Lord Siva, who prayed to the Lord for a male Child. Lord pleased with her prayers and blessed her with a child. But all the people in the village mistook her and abused her for begetting the child who had no father. The child also, as it grew up, became the object of derision to the others. He was teased by the others as a fatherless son. The mother there upon instructed him to pray Lord Siva for the help. As advised by his mother, he performed a penance for Lord Siva and Lord Siva instructed him to construct temples for all Goddesses at Alampur, which is the western gate of Srisailam. The boy who was known as “Rasa Siddha” started with the construction work. While he was engaged in the construction of these temples a king named Vilasat Raja, who was an Atheist invaded this place and ruined many of the temples. He tried to snatch away the pot containing Siddha Rasa (miracle juice) from Rasa Siddha. This juice was said to possess the capacity of converting stone into gold. But Siddha who knew this cursed the king who lost all his army and wealth.

One day while the King was wandering in the forest in search of food and water, he came across a hunter who offered him some food. The hunter went into the forest in search of food. He saw a deer and tried to kill it. The deer requested him not to kill and told him that it would come back after feeding its young ones. The deer also told the hunter to believe in its words and that if it did not act up according to its words, it was prepared to suffer the same sin as that of King Vilasat who ruined Siva temples. The hunter left the deer and told this to the King. The king followed the hunter and came to see if the deer would come back. The deer which came back as per its words on seeing the King Vilasat, turned its face away from the King, saying that it would not see such as sinful man. The king repented for his sins and begged the deer to tell him as to how he could get rid of them. The deer told the King that he should go to Brahmeswara Kshetra and do penance there for some time and rebuild all the temples. On one of the sculptures of the temple, this story is depicted. The deer also told him that by the time when the image of the King on the stone becomes spoiled in courses of time, the king would be relieved of the greatest sin.

This temple was built in 6th century by Chalukyas of Badami and renovated in the year 2005. Shatavahana Ishvakus of Nagarjunakonda, Badami Chalukyas, Rashtrakutas, Kalyani Chalukyas, Kakatiyas, Vijayanagara Empire and Qutb Shahis of Golconda has contributed for this temple.