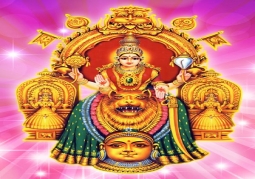 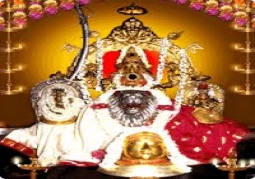 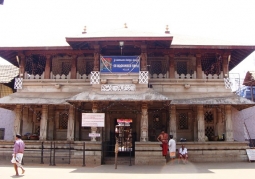 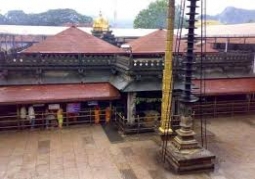 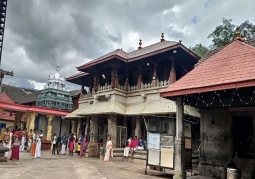 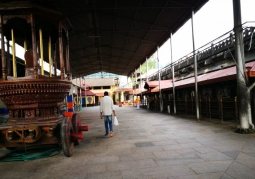 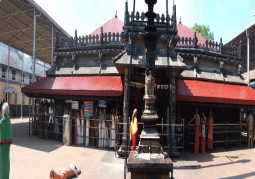 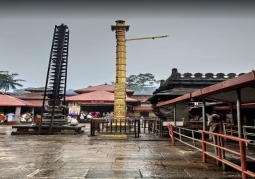 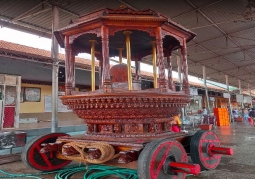 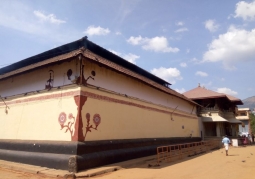 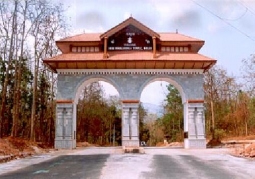 A demon Mookasura by name was performing penance on Lord Shiva. As the world would be subjected to untold hardships if the demon succeeds in his penance, Devas appealed to Mother to intervene in his penance. In the war with Mother, Mookasura demon surrendered at the feet of Mother. As prayed by the demon, Mother agreed to stay here in the name of Mookambika. Sri Mookambika Temple is facing in East direction, constructed in Kerala and Dravidian style of architecture. The main entrance at the Eastern side leads to the gold-plated Dhwajasthambha. Pre-entrance has a three flag proportion and is about 3 feet wide and 12 feet long. Outside the temple is a large and beautiful Deepa Sthambha (a pillar to hold lamps). This has 21 concentric circles in which the lamps can be lighted and when viewed from Kodachadri, one would feel as though we were looking at the Divine Makara Jyothi at Lord Manikanta's Shabarimale. The Garbhagriha is single yoni flag size (Eka yoni pramana dwaja aya). The Sanctum has a Quadrangular shape with a Vimana Gopuram and the tower is covering of gold.

Mandapams & Pillars : This temple has a Lakshmi Mantapam and Saraswati Mandapam, there are four pillars at Lakshmi Mantapa and on upper portion of each of these pillars, we find beautifully carved images of various gods. Prominently, they have sculpted the images of Ganesha, Subrahmanya, Naga, Mahishasura Mardini and the goddess in different postures as delineated in Devi Mahatma. The temple comprises of a large 135 feet long mandapa adorned with beautiful carvings of the deities.

The King Halugulla Veera Sangayya constructed the stone walls inside the Kollur Mookambika Temple. In an ancient inscription (dated 1481 A.D.) found here, the source of the Shakthi has been described. There are ponds in this temple namely Agni, Kasi, Shukla, Madhu, Govinda,Agasthya, Archana Gundu.

As per the legend, Maharishi Kola was fascinated by the vast green pastures and natural beauty of this place and decided to his penance near the Agni theertha. He opted for a rock to perform his penance. Lord Shiva was happy with Maharishi Kola’s penance and came to bless him. Lord Shiva asked him for his wish and Maharishi Kola just desired welfare for the mankind. Lord Shiva was happy to know the selflessness of the saint and granted him his wish. This temple is 1200 years old by Parashurama and the temple has received several enhancements during Keladi Nayakas period (15th / 16th century). The temple was also renovated in recent times. Former Chief Minister of Tamil Nadu Sri. M.G.R. gifted a god sword which weights one k.g. and are 2 feet long. The former Chief Minister of Karnataka - Sri Gundu Rao has gifted a similar type sword made of silver. The facial mask of Goddess Mookambika is completely of gold and gifted by Vijaya Nagara Empire. The gold face mask of Jyothirlinga gifted by Chennammaji of Keladi is another unique ornament.

When Baghwan Sankara first came to this place, there was a Swaymabu Linga worshipped by Kola Maharshi. It so happened that Sri Sankara was not able to get up one day after completing his meditation. Mother Herself prepared a medicine for the Acharya and gave it to him. Following this event, Kashayam-a medicine prepared with herbals is offered as Prasad to devotees. This is devotionally consumed by the devotees. It is said that Baghwan Sankara authored his Soundaryalahari from this temple.

This Temple is entirely carved out of Saligrama rock

National wide Vedantic learning in 13th C.E under the leadership of Sri Madhvacharya

Situated at the meeting point of river Suvarna into Arabian Sea

Has an extensive collection of coins belonging to various dynasties