THE TEMPLES OF GANDIKOTA

Sri Ranganatha swamy is the main deity of this temple and an incarnation of Lord Vishnu. There is no deity inside Madhavaraya temple. 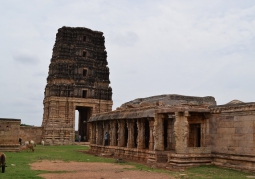 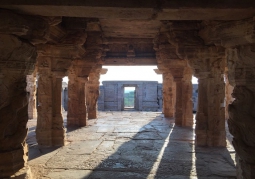 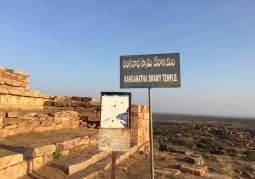 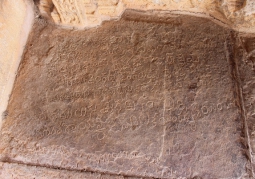 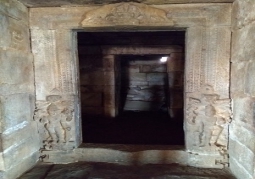 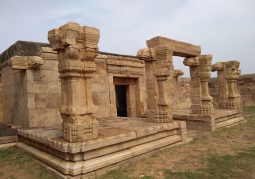 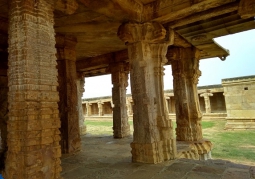 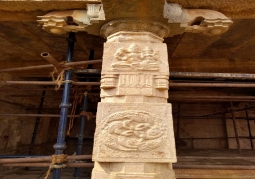 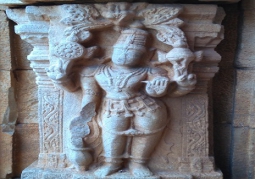 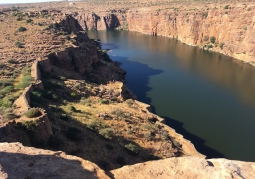 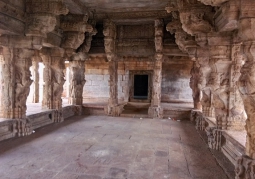 Sri Ranganatha swamy is the main deity of this temple and an incarnation of Lord Vishnu. There is no deity inside Madhavaraya temple.

Madhavaraya Swamy Temple is facing towards East direction and style of architecture is Vijayanagara style. The temple has a Five-tiered gopura. The carvings of fish and tortoise seen inside the dwaram (entrance),There are small statues and sculptures of Hindu Gods carved over the gopuram. The entrance in the centre has four vertical jambs, all decorated with the figure of women standing under verticle creeper design and dwarapalakas. Madhavaraya Swamy temple has small statues and sculptures of Hindu Gods carved over the walls of the temple. Many of the stone carvings depicted stories from Ramayana and Mahabharata. There is only one inscription available from Madhavaraya Swamy temple. This inscription found on a slab at the entrance of second mandapa of the Madhavaraya swami temple. It is a votive record, and states that certain Ramakrishnayya son of Gundraju Krishnamaraju, his wife Akkamma, Mangamma, his son Anumanth and others, Krishnama Raju, Papa Timmaraju, Banama Basavaaju have paid their homage and performed the tomala Kaimkarya to the god Madhavarajaya.

Mandapams & Pillars : Madhavaraya Swamy temple has a huge courtyard had pillared mandapas running on all the sides. It consists of a garbha griha, antarala and arthamandapa, supported by six pillars three in each row. The carvings depict several scenes such as musicians playing instruments. The Mukhamandapa is a square structure. It has two porches on either side and the mahamandapa in the east. All the pillars have Vijayanagara capitals. The mahamandapa, raised on pratibandha type of adhistana, has twenty four pillars arranging in four rows of six each. The pillars having vyala brackets and pillars with projecting pilates are employed in this mandapa. The other mandapas, located in the courtyard of Raghunatha swamy temple, possess simple chitrakhanda type of pillars. All the pillars are crowned by capitals having lotus corbels. The ceiling of the mahamandapa consists of astakona design enclosing padmasila.

Ranganatha Swamy temple is in the courntyard is the Natya or Ragamantapa in the south-west comer.The temple has a garbhagriha, antarala and a pillared mukhamandapa. The pillars are profusely carved, depicting scenes from Ramayana, Mahabharata and Bhagavata. There are 4 rows of pillars with 5 in each row, on the exterior of the garbhagriha, there are several line drawings depicting Rama, Sita, Lakshmana and Hanuma, Mahishamardani and scenes of Dasavataras.There are also erotic figures in the adhisthana part. The pillars of the mahamandapa of the Ranganatha swamy and the Madhavaraya temples of Gandikota, contain many sculptures. The pillars of the mahamandapa carry sculptures of Surya, Narasimha, Vamana, Rama, Varaha, Kurma, Matsya, Yoganrasimha, Krishna, Lakshmi Narasimha, Govardhana giridhari.

There are also a number of water reservoirs, in the form of tanks like the Rajula Cheruvu, Kattula Koneru, etc., and a number of well. Red granite. Gandikota surrounding landscape also includes monolithic boulders of red granite.