The main deity of this temple is Vijay Vittala, who is an incarnation of Lord Vishnu. There is no deity in this temple presently. 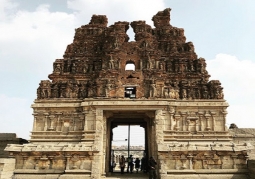 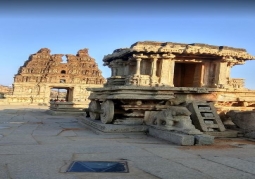 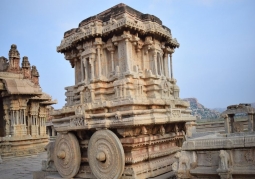 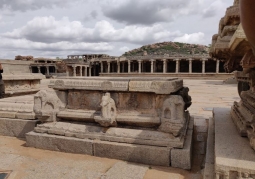 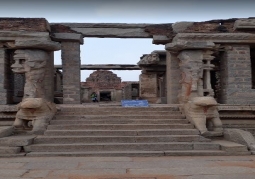 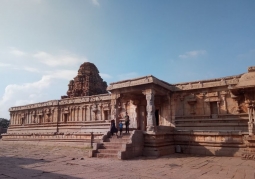 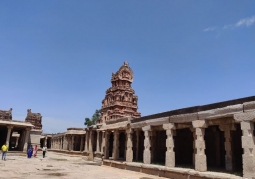 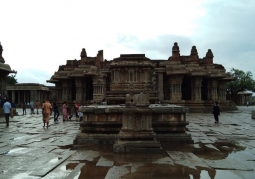 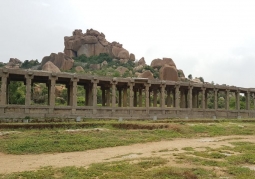 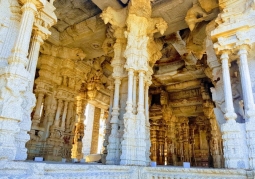 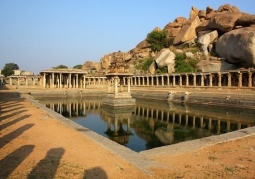 The main deity of this temple is Vijay Vittala, who is an incarnation of Lord Vishnu. There is no deity in this temple presently.

The Vittala Temple in Hampi is an ancient structure, which is well known for its architecture and unmatched craftsmanship. This temple has some beautiful stone structures - like the stone chariot which cannot be described in words and the interesting musical pillars. Vijay Vital Temple is facing in East direction. There was three tall gopurams, (now ruins).
Pillars : There are forty pillars lining the facade of the temple Mahamantapa. Each of these pillars has a height of 10 feet. The central part of the Maha Mantapa has sixteen intricately decorated pillars having beautiful sculptures of Narasimha and Yali. There are a set of main pillars and several sets of minor pillars inside the Mantapa. Each main pillar provides support to the ceiling of the Ranga Mantapa. The main highlight of the Maha-Mantapa is its richly carved giant monolithic pillars. Every main pillar is surrounded by 7 minor pillars. These 7 pillars emit 7 different musical notes. The notes emanating from these pillars vary in sound quality depending on whether the instrument is a percussion, string or wind instrument.
Musical Pillars of the Ranga Mantapa : The Ranga Mantapa is one of the main attractions of the Vittala Temple. The large mantapa is renowned for its 56 musical pillars. These musical pillars are also known as SAREGAMA pillars, indicating the musical notes emitted by them. The musical notes and emanated when the pillars are tapped gently.
The Grabha Gudi has built in Dravidian style of architecture, the inner sanctum does not has any idol. On the outer wall of the sanctum is richly decorated the motifs of lotus flower known as kumbha pankajas (lotus flower flows out of a pot). The temple complex is a sprawling area that is surrounded by high compound walls.
Mandapams : Open Mantapa was added to this temple in the year 1554 A.D. There are few mandapas in this temple namely Maha Mantapa or main hall (also known as Sabha Mantapa or congregation hall), Ranga Mantapa, Kalyana Mantapa (marriage hall), Utsava Mantapa (festival hall). The ceilings of the hall carving's like lotus at the centre.
Maha Mantapa : The Maha Mantapa or main hall of the Vittala Temple is situated in the inner courtyard of the temple complex. It is a structure of immense beauty and is situated on a highly ornate base. The base is decorated with carvings of warriors, horses, swans and several other ornamental designs. This fluted platform is carved with a series of floral motifs. The lowermost of it is a chain of horses, its trainers and the traders.
The eastern hall which is called the musicians hall is notable for sculptures of musicians on the pillars. The steps on the East of the Maha Mandapam are flanked by an elephant balustrade. Each of the pillars surrounding this hall is sculptured with musicians, drummers and dancers.
The southern hall is dominated with the rampant mythical creatures called Yalis. The capitals of each of the pillars branches into heavily ornate corbels with terminating with lotus buds.
The northern hall is surrounded with a series of pillars with the Narasimha (the man-lion incarnation of Vishnu) themes. The most notable ones are that of Narasimha slaying Hiranyakashipu on his lap. Prahlada is seen sitting at the base in a praying posture.

The temple was built as an abode for Lord Vishnu in his Vittala form, but god returned to live in his own humble home at Pandharpur. This temple was built in 15th century by Vijaya Nagara Empires. Krishna Devaraya was contributed for this temple between 1509 - 1529 A.D.

Threats during invasions : The Central western hall of the temple was ruined long ago during the attack of the Mughals that led to the downfall of the Vijayanagara Empire in 1565 A.D. The British rulers of India were wonderstruck and wanted to discover the secret behind the musical pillars. To satisfy their curiosity and to unravel the mystery behind the amazing pillars they cut two of the musical pillars of Vittala Temple to check whether anything existed inside the stone pillars that resulted in the emission of musical notes. However, they found nothing inside the pillars. The two pillars cut by the British rulers still exist inside the temple complex and can be seen by visitors even today. The rulers were defeated at the hands of the invaders at the battle of Talikota in the 16th century, most of the marvelous structures and edifices were systematically destroyed.

A mathematical and architectural wonder

One of the places where Guru Sri Vysaraya visited

Temple is 2800 feet above sea level with Vijayanagara style

Built on top of a hill called the Ballari Gudda

Created exclusively for the preservation of the sloth bear

Dam creates the biggest reservoir on the Tungabhadra River