The main deity of this temple is Someshwara, who is an incarnation of Lord Shiva facing East direction. Here deity is four feet in height and is in form of Shiva Lingam. 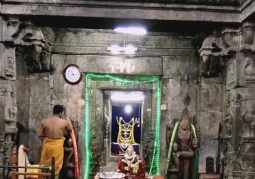 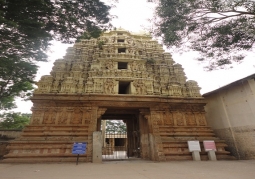 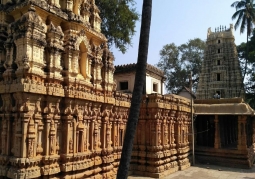 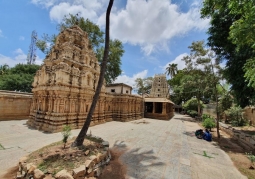 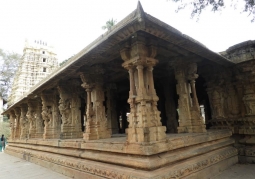 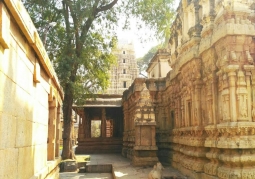 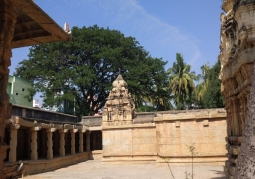 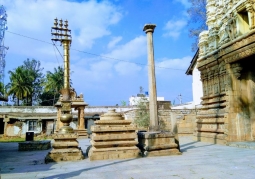 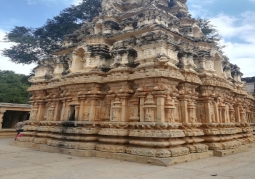 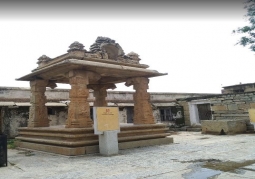 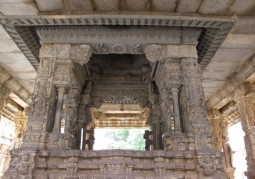 The main deity of this temple is Someshwara, who is an incarnation of Lord Shiva facing East direction. Here deity is four feet in height and is in form of Shiva Lingam.

Someshwara Temple is facing East direction and there is a tall rajagopuram over the mahadwara adorning several statuettes of dancing apsaras. Many figurines of apsaras, gods and goddesses sculptural decorations. A tall brass-plated dhwajasthambha (flag mast) and a rock-cut deepasthambham (lamp post) are located in front of the mantapa. The temple also has a large stepped tank in Vijayanagar style called Kalyani. The temple has heavy Prakara walls, the Vijanagara inscriptions are found on the walls of the yagashala and temple store room which date back to the 15th century A.D. Almost all the pillars and walls of this temple are highly ornate. Elephants are depicted frolicking, walking, fighting and sometimes hopping over a linga in the basement of the temple.

Pillars : The carvings on the inner pillars of the temple have an international connection which depicts the importance and value of trade to the King. The Kalyana Mandapa has 64 – 16 sided pillars, a few depicting men, riding horses and others represent mythological stories. The carvings on the pillars bear influence of the European, Chinese and Thai style. Many figurines of apsaras, gods and goddesses adorn all sides of the pillars of this mantapa.

Mandapams : A Kalyana Mantapa (Wedding hall), a Mukha Mandapa with massive pillars, a Vasantha Mantapa (Marriage Podium) and a shrine for goddess Parvati Devi. The closed mantapa is connected to a spacious open mantapa comsisting of four large projecting "bays" (area between four pillars). The open mantapa consists of forty eight pillars with carvings of divinities in frieze.The sculptures made intricately on granite makes it resemble wood carvings.

Garbha Gudi : The temple is every architect’s delight considering the beauty of Dravidian architecture. The door frame of this magnificent temple is carved in pure Vijanagara style with the dwarapalas (guards). The temple has a square sanctum which is surrounded by a narrow passageway. The sanctum is connected to a hallwhose walls are decorated with pilasters and sculptures in frieze. The tower exhibits well sculptured images of gods and goddesses from Hindu mythology. On the left of the entrance to the garbhagriha, you will notice the statue of Veerabhadra and Ganesha, and on the right, Nagas and Kartikeyan with six heads. The base of the surrounding wall of the main shrine is fully decorated with miniature carvings of sages, apsaras, elephants, lions, children playing with lions, fighting elephants etc.

This temple was built in 14th century by Vijayanagara Empire. Cholas are the main contributors of this temple.

The Tallest Linga in the compound is of 108 ft high

The only sanctuary in A.P with a population of Asian elephants