Sri Sharadamba Temple : The main deity of this temple is Sri Sharadamba. Goddess is seated on the Sri Chakra Peetham, holding a Japa Mala with a parrot perched on the top of her hand. Originally the Murti of Sharada made of sandalwood, installed over the Sri Chakra that Sri Adi Shankara carved on a rock.

Sri Vidya Shankara Temple : The main deity of this temple is Vidya Shankara, who is an incarnation of Lord Shiva facing in East direction. 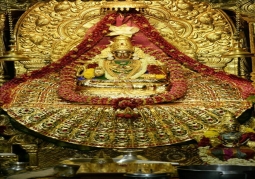 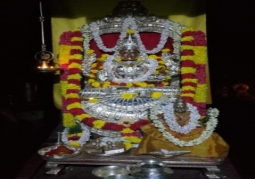 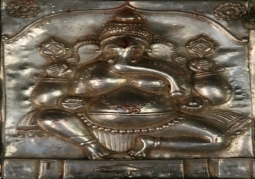 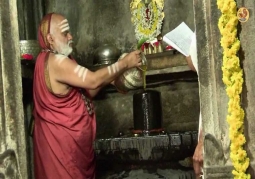 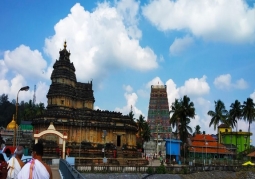 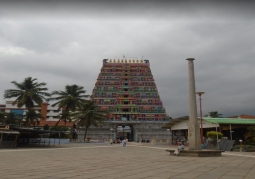 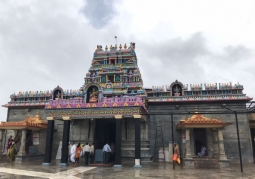 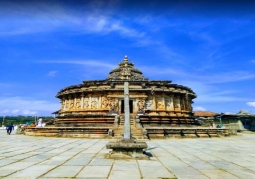 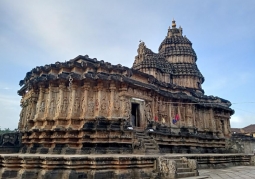 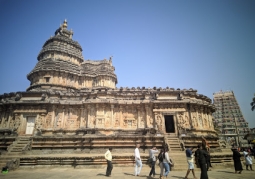 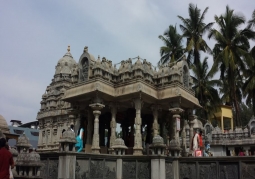 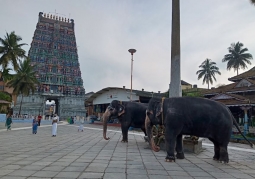 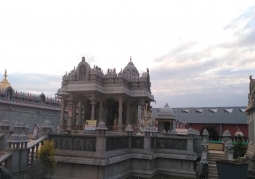 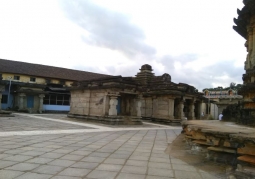 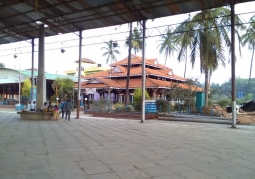 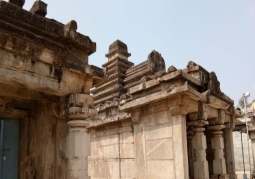 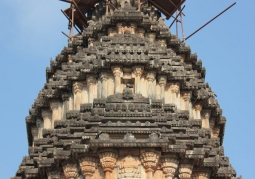 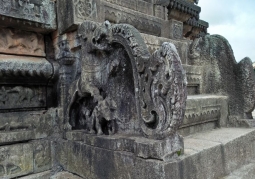 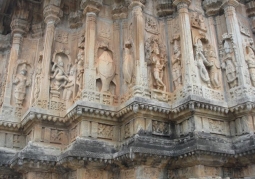 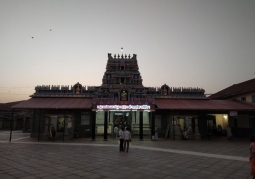 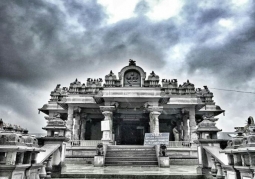 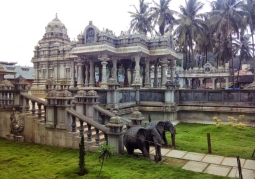 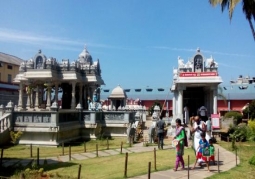 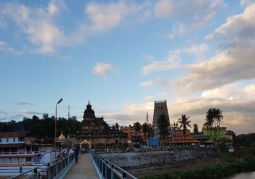 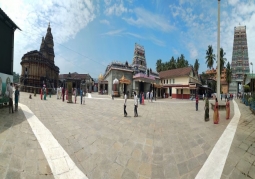 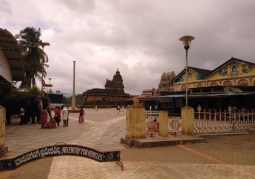 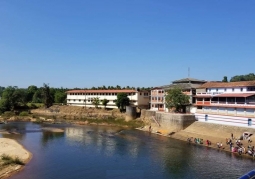 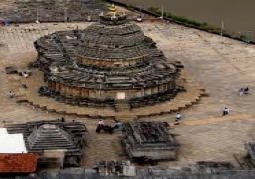 Sri Sharadamba Temple : The main deity of this temple is Sri Sharadamba. Goddess is seated on the Sri Chakra Peetham, holding a Japa Mala with a parrot perched on the top of her hand. Originally the Murti of Sharada made of sandalwood, installed over the Sri Chakra that Sri Adi Shankara carved on a rock.

Sri Vidya Shankara Temple : The main deity of this temple is Vidya Shankara, who is an incarnation of Lord Shiva facing in East direction.

SRI SHARADAMBA TEMPLE : This spot known as Shringa Giri, because the hill here was the place of the ashram of Vibhandaka Maharishi and his great son Rishyashringa. The region in which sage Rishyashringa performed great penance came to be known as Rishyashringagiri, Sringagiri and later as Sringeri. Shri Shankaracharya was travelling across the country with his disciples. He reached this spot, Shankaracharya installed the Sri Chakra on a rock there and installed Devi with the name Sharada. This temple was facing in East direction and During the time of Sri Abhinava Vidya Tirtha Swamigal, a beautiful Gopuram was constructed with seven Tier, 128 feet height, 9 kalasas on it. The temple also has the main entrance Rajagopuram it is a three-storied tower. Granite walls with polished around the sanctum and Sri Chandrasekhara Bharati consecrated the new temple in May 1916. Polished granite walls around the sanctum, the idol of main deity is Gold.

Outside the temple there is a single-stone pillar, which is over thirty feet in height. The Mahamandapam also has huge stone pillars and have carvings of deities like Durga, Raja Rajeshwari, Dwarapalakas and Devis according to the Shilpa Sastras. In the Navaranga Mantapa outside the sanctum sanctorum of the temple, there are four pillars on either side. Beautiful sculptures of eight-handed Durga or Chamunda, Rajarajeshwari and other deities adorn these pillars. The sanctum sanctorum of Sri Sarada Parameshwari has splendid idols of Dwarapalikas on either side. The door of the temple has Gold covering and is unique because it has 8 panels with figures of Ashtalakshmi inscribed on them. Outside the sanctum sanctorum, there are platforms all round,it is raised platform. It is based on a circular star-shaped plan. This temple was built in Dravidian style of architecture, Maha Mandapam has huge stone pillars and the sanctums southern platform has a silver Mantapa, which houses the idol of Sri Bhuvaneshwari. This Mantapa is called Vyakhyana Peetham and there is a Srichakra installed on it.

SRI VIDYA SHANKARA TEMPLE : Vidyaranya it is believed the brothers Harihara and Bukka to have a temple constructed over the Samadhi of his Guru, Vidyathirtha. This temple is known as Vidyashankara Temple and facing in East direction. The twelve pillars in the Mandapam are named the Raasi pillars and are so arranged that the sun's rays fall on each of them, in the order of the solar months. Each column also has a large rearing lion, with non removable rolling stone balls in its mouth. Inside the temple, on the floor, a circle is drawn with lines corresponding to the shadows cast by each pillar. Each pillar bears a design of an animal. This temple combines the Hoysala and Dravida architectural features.It stands on a richly sculptured basement.

There are six doorways leading into the temple. Circular shikhara crowns the sanctum and the raised platform or plinth on which it stands, which can be used for circumambulation (pradakshina). The exterior outer wall of the temple is richly ornamented with sculptures of Hindu gods and various scenes of Hindu mythology all over wall. Relief sculpture of the Hindu god Narsimha on the Southern wall. Sculptures of Lord Vishnu's Ten incarnations (Dashavatara), on the Western curved wall (rear side) of the temple. Buddha is depicted as one of the incarnations of Vishnu here. Walls are adorned with friezes of horses, elephants, lions and scenes from the Puranas. In addition to this, the ceiling is carved extraordinarily with lotus and parrots sculptures and various puranas. Several inscriptions are seen in the temple, describing contributions made by the Vijayanagar emperors. Nandi made out of a large pearl.

Sri Sharadamba Temple : When the Acharya came to Sringeri, he saw an unusual sight on the banks of the Tunga. A Cobra was seen spreading out its hood over a frog in labour pains, to give it shadow from the scorching mid-day sun. Struck with the sanctity of the place, which could infuse love between natural adversaries, the Acharya chose this very location to establish his first Math. The Acharya appointed his prime disciple, Sri Sureshwaracharya as the first Acharya of the Peetham. Since then, the Peetham has been blessed with an unbroken Guru Parampara, a garland of spiritual masters and Jivanmuktas representing Sri Adi Shankaracharya. The succeeding Acharyas have led a life of such austere penance that it has led disciples to adore in them the radiance of Sri Adi Shankara Himself. Adi Shankaracharya also decided to stay here and set up the Shringeri Sharada peetham, one of the five mathas he established in various parts of India. It is said that he spent twelve years here.

Threat : The Muslim invasion under Malik Kafur, destroyed the original idol made of sandalwood.

Legend : According to the history of the sringeri temple, the 32nd Acharya of the Peetham, Jagadguru Sri Vriddha Narasimha Bharati Mahaswamiji had a vision of the Ganapati when he was contemplating on resolving and issue in the mutt affairs. He offered prayers to the image of Lord Ganapati carved on the Torana of the door nearby. Hence, this resolved the problem immediately. Since then, the Ganapati became famous as Torana Ganapati. As per the story, a noted scholar named Mandanmisra was famous for his debating skills and no one could win the debate with him. Seeing this, Goddess Saraswati descended on Earth as Upaya Bharathi and organized a debate between Shankaracharya and Mandanmisra. The condition was that if Shankaracharya loses the debate, he would marry and have a family and if Mandanmisra loses, he will take up Asceticism. Upaya Bharathi handed each of them a garland and said that whichever garland dries up first, that person will lose the debate. The debate lasted for 17 days and eventually Mandanmisra‘s garland dried first and he lost the debate. Upaya Bharathi challenged Shankaracharya on a debate on marital life. After a time gap of one month, Shankaracharya won the debate. He begged Upaya Bharathi to follow him to a place he goes to frequently. She obliged on the condition that he will not turn back and look at her otherwise she will stop. Mandanmisra was a disciple of Shankaracharya and he started the journey with Upaya Bharathi. On reaching the village of Sringeri, an unusual sight on the banks of River Tunga surprised him. A cobra was spreading out its hood over a frog in labor pains, to give it a shadow from the scorching mid-day sun. The sound of the anklets stopped and he turned back to look. Shankaracharya immediately installed the Sri Chakra on a rock there and installed Devi with the name Sharada. The Goddess appeared before him and said that this would become famous as the Sharada Peetham and that she would stay at the Peetam to grace the devotees. Mandanamisra, now Sureshwara became the first pontiff of Sringeri Sharada Peetam.

A Brahmana scholar after learning the nuances of Vedas and Sastras instead of sharing his knowledge with others and teaching others refused to do so which went against his dharma. He was cursed to become a Brahma rakshas. During Sage Vidyaranya’s time, on one of the pilgrimages of the Sage, the Brahma rakshas stopped his way and begged to free him of the curse. The Sage divined what had happened and then directed him to stay at Sringeri as a Kshetra Palaka (care taker of the Mutt). The Kshetra Palaka is locally called Malayala Brahma. The Murti of this deity carries a mace and wears pada raksha and is installed to the left of the door of the Sharadamba temple.

Sri Vidya Shankara Temple Legend : Vidyaranya is a legendary figure in the history of Karnataka and also South India. His period saw the beginning of Muslim incursions into the south. Vidyaranya was instrumental in helping the brothers Harihara and Bukka establish the Vijayanagara Empire which served as a fortress for defending hindu traditions and temples against the tidal wave of Muslim invaders from the North. This temple is known as Vidyashankara Temple. Sri Vidyatirtha was the reigning Acharya in the 13th century when two brothers from Ekasilanagaram came to meet him. While the younger brother renamed as Sri Bharati Krishna Tirtha stayed with him the older, Sri Vidyaranya travelled to spread the doctrines. Sri Vidyatirtha wanted to meditate and he explained to Sri Bharati Krishna Tirtha that his body would assume the shape of Chaturmurti Vidyeshwara after twelve years of yoga. An underground chamber was excavated near the bank of the river Tunga and the pontiff went into meditation with the instruction that no one should open the door for twelve years. After three years when Sri Bharati Krishna Tirtha was away, the attendants out of curiosity opened the chamber only to see that the body was no longer there, but there was a linga in its place. Sri Bharati Krishna Tirtha was upset over the incident, but he received a message from his Guru to build a temple there and call it the Vidyashankara temple. Sri Bharati Krishna Tirtha succeeded Sri Vidyatirtha as the next Acharya and he was followed by his brother, Sri Vidyaranya.

This temple also houses a broken sandalwood idol of Sharadamba, believed to have been installed in the Sharadamba temple by Adi Shankara himself. This idol is believed that, was damaged during the Muslim invasion and Sri Vidyaranya had the current Gold statue of Sharadamba installed in its place.

Sri Sharadamba Temple : This temple was built in 8th century by Saint Sri Adi Shankaracharya and Sri Chandrasekhara Bharati consecrated the new temple in May 1916.

Sri Vidya Shankara Temple History : This temple was built in 14th century by the brothers Harihara and Bukka, Vijayanagar rulers. The temple was renovated in 16th Century A.D.

This temple was built in 13th century by Hoysala Empires

Temple is famous for it's Trikuta Architecture

This temple was built by Hoysala Empires

Hassan is known as Ooty of the Poor

Located at a height of 1900 meters

Famous for its coffee estates

This is the highest peak with an altitude of 1950 meters