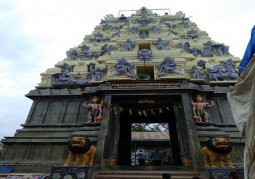 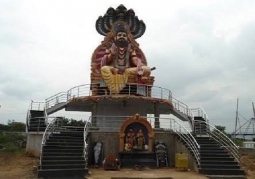 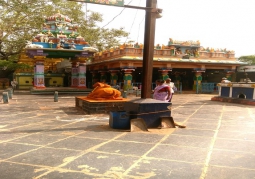 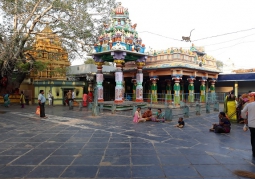 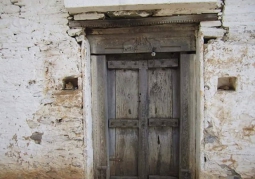 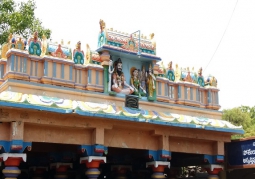 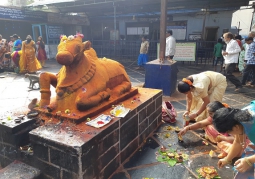 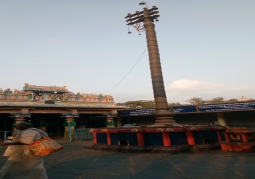 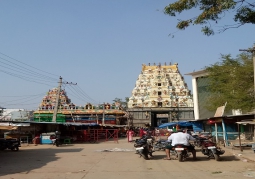 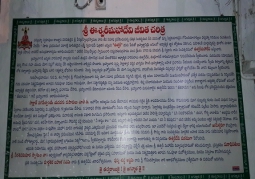 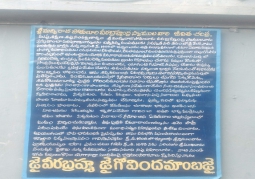 Brahmamgari Matham is also known as Potuluri Veerabrhamendra Swamy Temple. The Matham does not look like temple but has beautifully carved statues and its walls are full of Veerabrahmendra Swamy’s preachings and his predictions.

He is one of the great saints, who born in 1610 C.E in Kadapa. Brahmam, whose prophecies, knows as Kala Gnyanam (The knowledge of Time) have been a popular in Andhra since the premodern period. Veera Brahmam’s teachings and sainthood practices also represent the growing intersection of Hinduism and Islam. He preached anti caste principles. Brahmamgari matam was built after Sri Veerabrahmendra Swamy’s enty into his Jeeva Samadhi.

Legends Of the Place :

Sri Madvirat Pothuluri Veera Brahmendra Swamy is the Jagathguru. He wrote the Kalagnanam & Atmagnanam to enlight the people. He leads his life very simple. What every words he said in Kalagnanam in truly happening in the world and what every words said in Atmagnanam is truly enlighting the humanbeings as knowning the actual purpose of life.

The Story of Veera Brahmendra Swamy - At a time, when there were no five elements, the Trinity, Brahma, Vishnu, and Maheswara the planets like the sun and the moon, and the stars like Aswini, Vishwakarma, who was self-born, shone with five heads, Sadyojata, Vamadeva, Aghora, Tatpurusha and Isana and ruled the Universe in Kritayuga. The five Brahmas Ruled the Universe, with the help of their subalerns, The Sun, Indra, Iswara, Vishnu and Brahma, during the Krita, Treta, Dwapara Yugas. With the Advent of Kaliyuga, people began to lead sinful lives and Dharma was on the Decline. Wicked people tortured the good and the pious, who raised a woeful cry to Parameswara and begged for his protection. The Goddess of Earth, being unable to bear the burden of the sinful acts of the wicked and evil-minded people who formed the majority, went to Mahavishnu, in Vaikuntam, and sought his help.

Place of Birth - Sri Veerabrahmendra Swami was born of pious couple, Paripoornayya Acharya and Prakruthamba, in the first decade of the 17th century at the hermitage of ATRI MUNI on the bank of River Saraswathi in Uttar Pradesh while they were returning home in their village from a pilgrimage to Varanasi.

Childhood - Sri Veerabrahmendra was adopted by the Papaghni Peetham of the then Mysore State (present Karnataka) in his first year. He stayed there till his twelth year and then proceeded on a tour of various places in the country after Upanayana Samskaram i.e., wearing the sacred thread.

Penance and Prophecy - On his tour, he visited many sacred places and shrines and performed serve penance at Hariharapuram (Harihara). Then he went to Banaganapalle in Kurnool District, Andhra Pradesh. Here he started writing the book “KALAGNANAM”, literally ‘Knowledge of time’ full of prophecies and spiritual teachings as a cowherd in the house of Garimireddi Atchamma. He lived here for about 20 years.

Marriage - Sri Veerabrahmendra Swami left Banaganapalle and reached Kandimallayapalle in Kadapa District. He worked as a sculptor, carpenter and blocksmith for his livelihood and married a pious woman Govindamma, the daughter of Kotayyacharyulu of Peddakomarla. During his stay at Kandimallyapalle, he selected Siddyya, a muslim, and Kakkayya, a harijan, as his main disciples an imparted spiritual knowledge to one all, irrespective of caste, creed, sex, religion and region. Besides, he also taught the scriptures to the Muslin rulers of that period (Nawabs) and persuaded them to respect all the other religions.

Entering the Divine Body - It was written in the book Kalagnanam that he was in the human body till the completion of his austerities at Hariharapuram and then entered the divine body. The Swami performed many miracles while he was on a visit to the different parts of South India.

Attaining Siddhi - Sri Veerabrahmendra Swami attained ‘Sajeeva Samaadhi’ (living Samaadhi) by entering his grave alive in the last decade of the 17th century A.D. after leading a saintly life for about 90 years at his matam in the village of Kandimallyapalle of Kadapa District.

This Temple is old enough to witness rulings of Vaidumbas, Cholas and Kayasthas

There is a footprint of Lord Sri Venkateswara.