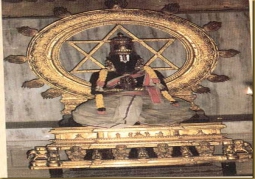 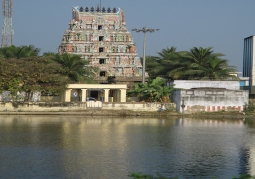 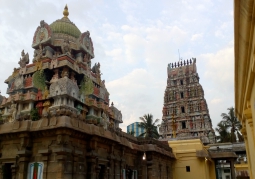 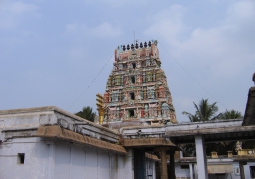 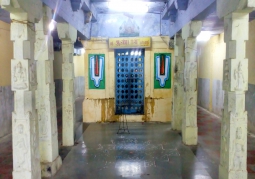 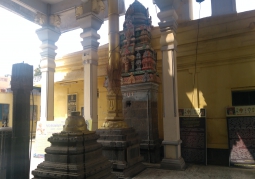 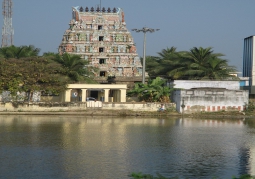 Temple faces in East direction and was built in Dravidian architecture style. The main tower Raja gopuram is of 5-tier. The Flagpost is located behind the shrine of Garuda, axial to the central shrine and the gateway tower. The Vimana tower above the sanctum sanctorum is called Jagannatha Vimana. In Koshtam Vinayagar as Thumbikai Alwar, Perumal in sitting posture and Durgai. Umbrella are chiseled above Perumal and Vinayagar. The Sanctum Vimana has the stucco images of Hayagriva, Lakshmi Narasimha and Garuda.

Mandapam and Pillars - The sanctum sanctorum consists of marvelous Artha mandapam and Maha mandapam, Lion Pillar mandapam in court yard. Urchavars of Jagannatha Perumal with Sthyabama and Rukmini, Brigu maharishi and Markandeya maharishi are in front of moolavar. Urchavars are kept in Arthamandapam. Garuda Bhagavan is facing Sri Jagannatha perumal in the Maha mandapam. Sri Thirumazhisai Alwar, the 4th of 12 alwars, is in a separate sannadhi in Maha mandapam. The Maha mandapa has a twenty eight pillared hall with sculptured pillars depicting Vaishnava mythology. There is a four pillared hall in front of the gopuram having sculpted images in the pillars from the Vijayanagara period. There is a Kalayana mandapa, Vahana mandapa for housing the divine vehicles and a Paramapada vasal.

A large temple pond to the east called Brugu Pushkarini, the presiding deity housed in the sanctum is an image made of Granite.

Arulmigu Jegannatha Perumal & Tirumazhisai Alwar temple is also known as "Madhya Jagannatham" and "Poorna Jagannatham". Birth place of Saint Tirumazhisai Azhwar. This Saint devotees of Srivaishnavism believe that he was the incarnation of Vishnu's disc, Sudarshana. One of the twelve Azhwars whose work is compiled as Divya Prabandha, the early medieval Tamil canon of the Azhwar saints from the 6th-9th centuries A.D. His works include Tiruvanthai and Tiruchanda Viruttam, which are included in the canon. According to the Hindu legend, the Saptarishis (the seven sages) wanted to have a view of Madhya Jagannatha (literally meaning jagannatha located in the middle). As per Hindu legend, the Jaganatha at Puri Jagannatha temple is called Vada Jagannatha (located in the north) and the one located in Adi Jagannatha Perumal temple at Thirupulla Madhya Jagannatha at this place.

Legend - Maharshi's Athiri, Brughu and Bhargava approached Lord Brahmma to suggest a place where they would perform penance. Lord Brahmma called the divine sculptor (Mayan), gave him a scale. He placed Tirumazhisai on one plate and the rest of earth on the other. The Plate of Tirumazhisai went down over weighing the other side of the scale. Realizing the glory of the place, the Sages performed penance here. Lord Jagannatha granted them darshan in sitting form. Born to Bhargava Rishi and Kanakangi in the Tamil Calendar month of Thai (Magam Star),Thirumazhisai azhvaar had a disfigured body at birth. Hence, his parents threw him into a Bamboo pit at Thirumazhisai (which is now a Mandapa to the west of the temple complex). A childless couple Thiruvaalan and Bangaya Selvi picked him up and brought him up with love and care.

Thirumazhisai Azhvaar also visited thiru Kudanthai and sung praise of Lord Aaraavamuthan Seeing the sleeping posture of the lord, a curious Thirumazhisai Azhvaar questioned if the lord’s tiredness was the reason for him to be lying down in his sleeping posture and if he would not raise and provide him darshan. After hearing this, it is believed that the lord slightly raised his posture to greet the azhvaar. Feeling the guilt of having caused strain on the lord, Thirumazhisai Azhvaar asked him to remain as he is and the lord remained so ever after. To this day, one can see the lord in a slightly ‘raised reclining’ posture (Uthaana Sayanam). The story goes that Thirumazhisai Azhvaar was undertaking yogic penance at this place. Shiva and Parvathi, who were flying and landed here. Over this place were pleased with his penance and landed here at Thirumazhisai. When asked for a boon, Thirumazhisai Azhvaar asked for Mukthi only to be rejected as only Vishnu had the power to provide moksham. He then asked for small thread that could keep rolling into the needle that he was using to stitch his torn clothes. Fuming with anger at this request, Shiva opened his third eye. Thirumazhisai Azhvaar invoked the blessings of Lord Narayana and immediately a third eye emerged for Thirumazhisai as well from the toe of his right leg with water rolling out to cool the fire raging from Shiva’s third eye. Pleased with the devotion of Thirumazhisai azhvaar, Shiva presented him the title of ‘Bhakti Saaran’.

This temple dates to the Dwapara Yuga, finds reference in the Brahmanda Purana as ‘Mageesara Kshetram’. As the place of the temple is believed to have in it all the glory of earth, it is named Magisaram. Those born in this sacred place and those who worship here will not have rebirth, according to belief.

This 500-1000 years old temple is built by Chola Kings . The contributors are Kulothunga Chola-III of 12th century A.D., Vijayanagara Kings. The last Renovation was done in 15th Century A.D.