The main diety of this temple is Agastheeswarar, who is an incarnation of Lord Shiva facing East direction. Agastheeswarar lingam is present with an umbrella of the five headed Nagarajan. The swayambu lingam is believed to have been present before the arrival of Agasthiar itself.

Anandhavalli (Goddess Parvathi) is other deity here consort of Lord Shiva. The goddess here is Ambal Sri Anandhavalli, who is seen in standing posture facing South. Goddess Anandavalli with 3 eyes and keeping her left foot forward beneath her feet is the most famous "Durga Saptashati" yantra. Here the goddess has taken a fierce form to destroy the evil. Sage Agasthiyar had installed a maha yantra in front of the goddess to pacify her anger. 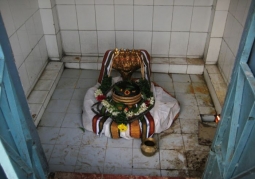 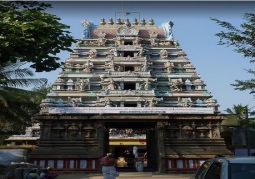 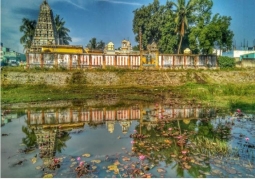 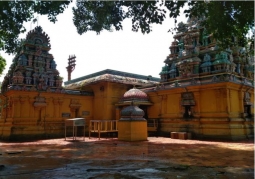 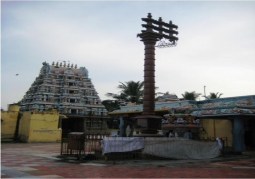 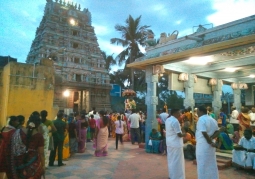 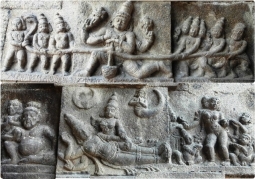 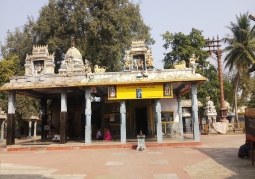 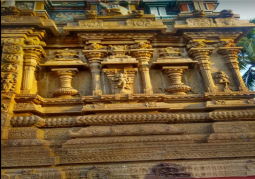 The main diety of this temple is Agastheeswarar, who is an incarnation of Lord Shiva facing East direction. Agastheeswarar lingam is present with an umbrella of the five headed Nagarajan. The swayambu lingam is believed to have been present before the arrival of Agasthiar itself.

Anandhavalli (Goddess Parvathi) is other deity here consort of Lord Shiva. The goddess here is Ambal Sri Anandhavalli, who is seen in standing posture facing South. Goddess Anandavalli with 3 eyes and keeping her left foot forward beneath her feet is the most famous "Durga Saptashati" yantra. Here the goddess has taken a fierce form to destroy the evil. Sage Agasthiyar had installed a maha yantra in front of the goddess to pacify her anger.

It is said that Sage Agasthiyar stayed here for long and worshipped Lord Shiva and also helped the devas like Lord Indra, Indrani (Indra’s wife) and Viswaroopan to get relieved of their curses, by performing pradhosha poojas. South facing temple, In Hindu mythology, any temple facing the South is called parihara sthalam, in which one can find remedy for any kind of problems in life. The temple is built in Dravidian style of architecture.

There are many small frescoes of Dasavatharam, Mohini (Mahavishnu) distributing Amrutham (Celestial Nectar which evolved upon the churning of Paarkadal), to devas, Lord Shiva resting on Parvathi’s lap out of dizziness as he drank the poison emerged out while churning Paarkadal, Dharma Sastha (incarnation of Lord Ayyappa) on Gaja (Elephant) Vaahana along with wives Poorna and Pushkala, Maha Vishnu’s Anantha Sayanam, Brahma on lotus seen emerged from Lord Vishnu’s Naabi (Navel), Arjuna performing Thapas (penance) on Agni to obtain Pasupathastra (Lord Shiva’s arrow) from Lord Shiva, Rahu Ketu being created, marriage of Shiva, yaga by Brahma and Vishnu, Kannappa Nayanar, Krishna Leelas etc. In the sanctum sanctorum hall is present sage Agathiar and the ‘Naalvars’.

The temple tank, Agasthiyar theertham is situated outside the eastern praharam of the temple. Agasthya theertham, said to have been created when the Agasthiar drank the sea, spitting a little of it out in this place. The great sage later returned to kailasam, at Shiva's urging, but he is said to visit here every vaikasi full moon. Also, river ganges (holy Ganga) merges in this theertham during the full moon days of Thamizh month ‘Vaikasi’. If one makes a dip here in this water on the said day, it is said that he will never have a re birth in this world again. Many devotees come to take bath on that day. The goddess Sri Anandhavalli is made of 'Margatham stone' (Emerald).

Once the three sages Vasishtar, Gauthamar and Kalvar were looking for a place to do their penance. They went to Brahma and requested him to show them such a place. Brahma then made awheel made of dharba grass and rolled it. It rolled and rested in a place and Brahma indicated that particular place is good for them to perform their penanace. The place indicated by Brahma is beleived to be this panchishti. Panch meaning five and ishti means yagna. As per legends, there was a 'Yatchan' (demon king) called Sukethu, who was cursed by Lord Subramanya to be born as an Asura, for showing his arrogance towards Shiva and Parvathi. Sukethu later married an Asura woman and gave birth to three boys.These boys who came to know about the curse of the father, did a penance towards Goddess Parvathi and became powerful. They then started teasing the devas with their strength. Devas then went and complained to Lord Shiva. Lord Shiva directed sage Agastiyar to teach a lesson to Sukethu. Meanwhile Sukethu after losing a battle with three asuras went and hid under the sea. Sukethu's sons went in search of his father deep into the thus destroying the sea lives and creating a lot of commotion. Sage Agastiyar to curb the mischievous sons of Sukethu, drank all the sea thus trapping the three sons and Sukethu in his stomach. The earth became dry and devas pleaded to restore the sea. Sage Agastya restored the sea by spitting the sea back in its place.He also spat some remaining water in his mouth in pancheshti and the pond here in the temple is known as 'Agasthya theertham'.

Legend 1 - Sukethu’s curse : Once at kailasam, when Shiva was teaching the Shiva Philosophy with Parvathi sitting next to him, a yatchan called Sukethu questioned him whether it is ok to teach the philosophy while Parvathy is sitting along. Shiva just smiled but Lord Muruga got angry since Parvathy is always part of Shiva himself and so cursed him to become a demon. He then married another demon and gave birth to 3 sons. The 3 sons, knowing the curse of his father, did a penance towards goddess Parasakthi and got all the powers. With this they disturbed everyone in the celestial world and so all the devas went to sage Agasthiar to do something. Agasthiar then prayed to Lord Shiva and he appeared as a Rishaba rudar along with Parvathi, Vinayagar, Murugan and Nandhi devar and gave the necessary powers to sage Agasthiar. Meanwhile Sukethu fought with other demons and on becoming tired went and hid himself under the sea. The 3 sons then searched their father in the sea and created a Pralayam there. All the lives of sea were affected and so Agasthiar just drank the whole sea and it became completely dry. The devars then requested Agasthiar to bring back the sea and Agasthiar spit a little water at Pancheshti and it became the ‘Agasthya theertham’ and let the remaining water back to the sea itself. In the process, Sukethu and his sons were caught inside the stomach of Agasthiar and they requested pardon. Agasthiar then made them take a dip at the ‘Agasthya theertham’ and conduct five yagnas Deva yagna, Brahma yagna, Pithur yagna, Bootha yagna and Manuda yagna. Finally, they got their curse cleared off.

Legend 2 - King Mithrathuvasan : Once king Mithrathuvasan of Kanchipuram was doing regular pradhosha pooja here. When he was coming for one such pooja, he heard a crying voice for help and when he went he saw a tiger about to kill a man who was very lean and bony. When the king told the tiger to leave that poor man, the tiger replied that it is also old and needs food for it and its kids. The king replied to take him instead of the poor man since he is hale and healthy but requested to wait till he comes back after the pradhosha pooja. The tiger accepted and relieved the poor man. As promised when the king appeared before the tiger after the pooja with sacred ash full of body, rudraksha chain around his neck and pradosha prasadam (Vilvam) in his hand, the tiger hesitated. When he compelled the tiger to take him by voluntarily putting his head inside the tiger’s mouth, it disappeared and Lord Shiva gave dharshan as rishabaroodar along with Parvathy Devi. He realized that it is just the drama of Lord Shiva just to show him and the world the significance and power of pradhosha pooja. The place where this happened is being called ‘Thiruvilankeswarar’ a few kms from here and a Shiva temple is present there. Since king Mithrathuvasan came forward to sacrifice himself because he did not want even a tiger at forest to starve, this place is considered an annadhana kshetram.

Legend 3 - Indhra, Indrani and Viswaroopan’s curse : Once Indhra wanted to start a yagna but since Deva Guru Brihaspathi who normally is the guru of all yagnas in Devaloka (Brihaspathi) was in tapas towards Lord Shiva, Indran conducted the yagna with Viswaroopan’s as guru. So, Brihaspathi cursed both of them to take human births. They had born as sons of king Mithrathuvasan in the name of Chandhramoulipriyan and Sambupriyan. In another incident, while Padmini, daughter of Guberan was taking bath, sage Romar covered with hair all over his body was passing through and Padmini made fun of him and laughed. So, sage Romar cursed her to take human birth and to be a wife for two persons since she laughed at the sage twice. Thus, she took birth as the daughter of king Bhavabanu of Virudhachalam in the name of Ambikai. When the king arranged swayamvaram for his daughter, demon Sambasuran participated with a fake identity and took away Ambikai. Chandhramouli Priyan and Sambupriyan who also participated in the swayamvaram then fought with the demon, won him and both married her. Later demon Sambupriyan again took her way one day. Chandhramouli Priyan and Sambupriyan searched for her everywhere and finally came to Kalahasthi and prayed to Lord Shiva. They then heard the holy voice that Agasthiar who was in tapas at south-East of Kalahasthi will help. They then came to Pancheshti and fell at the feet of Agasthiar. He then made them to create an ashram here and do the pradhosha pooja. On one pradhosha when they were returning to the ashram after the pooja, they heard a crying female voice and they went and saw their wife Ambikai getting ready to be sacrificed to goddess Kali by a demon called Sakthiubhasakan who brought her here after killing demon Sambasuran. They both then killed the demon and relieved her. Agasthiar then ended the curse of all the three and they all went to their respective worlds.

Legend 4 - Pancheshti : Once sages Vasishtar, Gouthama and Kanvar went to Lord Brahma to suggest them a suitable place on earth to do tapas. Brahma then made a wheel out of some Dharbai grass and rolled it over. The place where it stopped is Pancheshti. Sage Agasthiar conducted five yagnas (Pancha means five, Ishti means yagna) and so the name Pancheshti. Agasthiar was so attached to this place that he didn’t want to return to Kailasam after his work was over. Only Lord Shiva could finally convince him. So, it is called ‘Pancham theerkum Pancheti’ meaning ‘Starvation solving Pancheshti’.

This temple was contributed by Hoysalas and Rashtrakutas. In the Eastern side on the North there is a separate sannidhi for the ishta lingam who was worshipped by Pulasthiyar. This holy place is said to have references in ancient Naadi astrology for various Pariharams. This temple was built 1000 years ago by Vijayanagar Empire Chandragiri Clan.