The main diety of this temple is Sri Vadaranyeswarar, who is an incrarination of Lord Shiva facing East direction. Here lord is in the form of Shiva Lingam form Swayambu Moorthy. 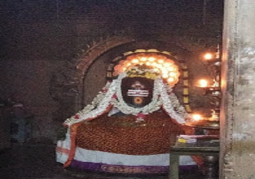 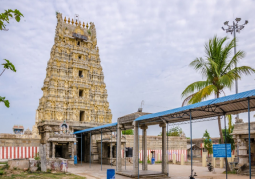 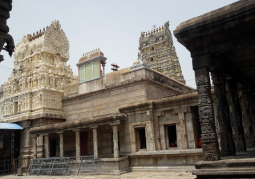 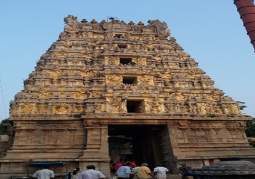 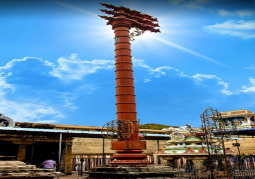 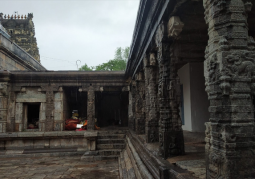 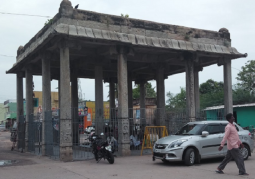 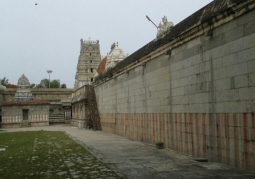 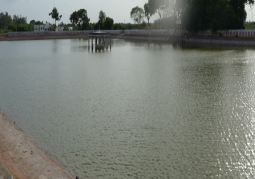 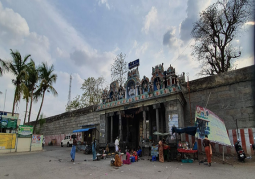 The main diety of this temple is Sri Vadaranyeswarar, who is an incrarination of Lord Shiva facing East direction. Here lord is in the form of Shiva Lingam form Swayambu Moorthy.

Ancient times this region was a forest densely covered with banyan trees (Aalamaram in Tamil). It is believed that a Swayambu Lingam was discovered under a banyan tree. Later a temple was constructed and the lord was named as “Vadaranyeswarar” (Vadam meaning banyan tree, Aranyam meaning forest and the Easwar represents Lord Shiva). The region was a jungle of banyan trees where Lord Shiva rose as a swayambu. Lord is hence named Vada Aaranya Easwarar. The temple is facing in East direction and built in Dravidian style of architecture. Its main tower (Raja gopuram) has 5-tiers. Inner gopuram has 3-tier gopuram. Stucco images of Oordhva Thandava Moorthy, Nandhi playing miruthangam / mathalam, Karaikkal Ammaiyar singing posture, story of Karaikkal Ammaiyar, lord wedding posture, Gajasamharamurthy can be seen in the gopuram. There is a dhwaja stambham infront of the temple. The sanctum vimanam is of the Gaja Brushtam. There is yet another image of Nataraja, housed within the sanctum of Vadaranyeswarar. The big dwarapalakas along with an idol of Ganesha are found at the entrance of the sanctum.

The towers and the walls surrounding of the temple courtyards date back to the 12th and the 13th centuries. Nrithya Ganapati, Dakshina Murti, Lingodhbava, Brahma, Durga and Durga Parameswarar are found as the niche idols around the sanctum sanctorum walls. The stone inscriptions available in this temple are from the periods of king Parantaka Chola-I to the last king of Vijayanagara. Many inscriptions have been etched on the walls of the Thiruvalangadu temple, recording various donations over the centuries. A very important Chola inscription, dated 1018 A.D., etched on thirty one copper plates was discovered in this temple as early as 1905. The Natarajar Mandapam (Hall) of this temple is called “Rathna Sabhai (Gem hall)”. In front of the temple, there is a 16 pillared mandapam. There is a 100 pillared mandapam after the first entrance of the temple. There are two other mandapams namely, Dhuvajarogana mandapam (Kodiyetra mandapam) and Sukravara mandapam in the temple, Artha mandapam. Stucco images depicting the five dance halls of Shiva (Chidambaram, Madurai, Thiruvalangadu, Tirunelveli and Kutralam) are seen crowning the entrance to the inner prakaram. This hall has a copper roof with five kalasams representing the five elements. It is said that Saint Karaikkal Ammayar's jeeva samadhi can be seen at the end of Lord Natarajar’s hall (Sabha). There is a koneru in this temple named as Mukthi theertham, Sentradu theertham, Siva Kara theertham. There are two Shiva Lingams one made of Spadigam (Crystal) and the other one made of Maragadham (Emerald).

Oordhva Thandavam - The legend is that two demons Sumban and Nisumban had worshiped Lord Shiva to seek his blessings. Impressed by their rigorous penance, Lord Shiva gave them a blessing that every drop of their blood that fell on the ground would turn into a lingam. Having sought Lord Shiva’s blessings, these two demons started terrorizing the celestial gods who in turn complained to Lord Shiva. Lord Shiva asked Goddess Parvathi to create “Bathra Kali” and this Kali was advised to go to Thiruvalangadu to destroy the demons. Mother Parvathi created a furious Kali and destroyed the demons. Kali consumed the blood of the demons and their army and grew more furious. However, since she had drunk the blood of the demons, she started losing control of her senses and started acting like a demon herself. She started terrorizing the celestial gods, who one again sought Lord Shiva’s intervention in this matter. To solve this problem, Lord Shiva and Goddess Parvathi came to this place. Kali who was not in control of her senses, started fighting with Lord Shiva. Lord Brahma, Lord Maha Vishnu and Rishi Naradhar intervened and made them accept a dance competition instead of a fight, which the duo agreed to perform. It is believed that the dance performance was witnessed by Goddess Parvathi, Rishi Naradhar, Sage Munjikesa (Sage Anantha) and serpent Karkodaka. Lord Brahma and Lord Mahavishnu are believed to have provided music for their dance. Lord Shiva performed 17 types of dances which Kali also repeated. Finally, Lord Shiva played his “Oordhva Thandavam” a dance with very fast movements. Lord Shiva intentionally dropped his right earring on the ground, stood on his right leg, picked up the earring with the toe of his left leg and wore it again during the dance itself. Kali could not repeat this movement and admitted her defeat. Goddess Parvathi, who was astonished to watch this performance is praised here as “Arukilirunthu Viyantha Nayaki” (Goddess who witnessed the spectacular dance performance). The Lord here is praised as “Andamura Nimirntharuliya Nayanar” as he performed the Oordhva Thandavam. Kali was very angry to accept her defeat. To appease her anger, Lord Shiva told her that he would be performing a pleasing dance “Raksha dance” at Thiruvirkolam temple and she could have his dharshanam there. Lord Shiva said that he alone was equal to her and said further that those coming to worship him here, should worship her first to reap the full benefit of the worship. Since then, Kali has her own temple to grace the devotees.

Karaikal Ammaiyar - Lord Shiva’s dance here was also witnessed by one of his great devotees, Saint Karaikal Ammaiyar. She is also one of the 63 Nayanmars. It is said that she went to Mount Kailash by walking upside down on her head to see Lord Shiva. The Lord addressed her as “Mother” (Amma in Tamil) and advised her to go to Thiruvalangadu to see his dance. She came to see the lord in this temple but a Shiva lingam started appearing wherever she put her foot. To give respect, she decided to again walk upside down on her head. She witnessed the dance performance of Lord Shiva, rendered her pathigam (hymn) and attained salvation in this temple itself. It is believed that her last resting place was at the feet of Lord Nataraja. Since her pathigams are prior to the Moovars Devaram, they are called “Mootha Thiru Pathigam”.

Thiru Gnanasambandhar - Another legend associated with this place is that since Karaikal Ammaiyar had walked on her head at this place, Saint Thiru Gnanasambandhar was afraid to set his foot on the soil. Not wanting to show any disrespect towards Karaikal Ammaiyar, he decided to stay in a nearby village and spent the night there without visiting this temple. However, Lord Shiva of this temple appeared in his dream and asked if he had forgotten to praise him. Next morning, he visited this temple and rendered a pathigam in which he mentioned about the “Neeli story” and God’s reminder to praise him.

Neeli Story - Another legend associated with this place is that of a lady called “Neeli”. It is believed that she was killed by her husband as he had suspected her of infidelity. After her death, she could not move on to her next birth and started roaming around this place in the form of a ghost. Incidentally, in his next birth, her husband was travelling through this place. Seeing her former husband, Neeli decided to seek revenge. She assumed the form of his present wife and wanted to go with him. He was surprised to see his wife here, he sensed that something was wrong and he refused to let her accompany him. Neeli went to the locals (velalars) and complained that her husband was abandoning her. The locals interfered and asked him to stay with her at a nearby place and travel with her the next morning. He tried explaining to them that she might not be his wife but they refused to his pleas. Instead they vouched for his safety by saying that if anything were to happen to him, they would also give up their lives. As soon as they went inside the house that the locals had given to them, Neeli took her original form of a ghost and killed him. In the morning when the locals found him dead, they decided to end of their lives and keep the promise that they made to him. The legend is that 70 velalars gave up their lives by self-immolation (Theekuliyal in Tamil). It is also believed that Lord Shiva gave salvation to all of them. It is interesting to note that the old Tamil proverb “Neeli Kanneer” (Crocodile tears) originated from this story only. The hall where these velalars gave up their lives can still be seen near the Saatchi Boodeshwarar temple in Pazhayanur (at about one 1 Km from Thiruvalangadu temple). It is said that the heirs of those velalars still go to Thiruvalangadu temple for worship and for offering their services.

Mantheeswarar - Another legend is that Sani Bhagwan (Saturn) advised his son, Mantheeswarar who had accrued a sin (Dosham) when a lizard fell on him, to go to Thiruvalangadu and worship Lord Shiva there. Pleased with his penance, Lord Shiva appeared before him and blessed him by absolving the sin.

Bharata Muni prayed Lord Shiva for progeny - The most ancient legend has it that, Bharata Muni and his spouse Subhadra prayed in this Thiruvalangadu village for progeny, after taking bath in the Puthrakameshwarar theertham. The temple is built in 1075 to 1120 by Chola King Kulottunga Chola-I.

Rajendra Chola was contributed this temple. It is believed that Lord Murugan, Goddess Lakshmi, Karkotaka, Sage Sunanda and Saint Tirumular have Celestial gods (Devas) are also believed to have worshiped the lord of this temple, he is also praised a “Sri Devarsingaperuman”, worshiped Lord Shiva in this temple. Karaikkal Ammaiar also rendered her “Mootha Thirupathigam” about Lord Shiva here. Ammayar reached this temple by head as she thought walking by feet to lords shrine was a sin. She reached the state of bliss here. Saints Sambandar, Tirunavikkarasar and Sundar had praised the lord of the temple in their celebrated Thevaram hymns. This is the 15th temple in Thondai region in Thevaram hymns.