The main diety of this temple is Pushparatheswarar who is an incrarination of Lord Shiva facing East direction. Lord is in lingam form here. The scar caused by the cut of the king is visible on the Shivalinga. Lord Shiva here is a Swayambu Moorthy. 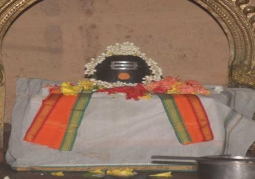 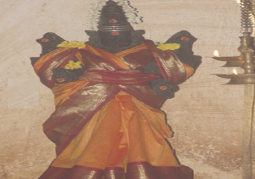 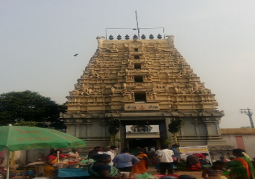 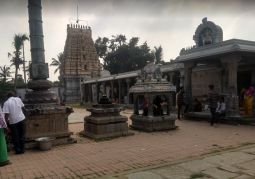 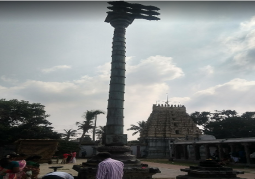 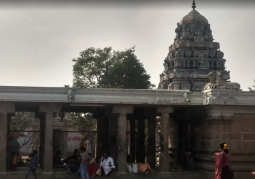 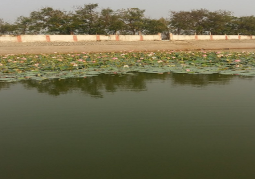 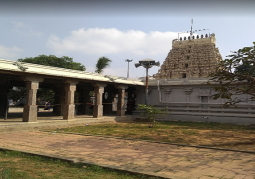 The main diety of this temple is Pushparatheswarar who is an incrarination of Lord Shiva facing East direction. Lord is in lingam form here. The scar caused by the cut of the king is visible on the Shivalinga. Lord Shiva here is a Swayambu Moorthy.

By Surya's devotion, Lord Shiva appeared as a lingam on one of the lotuses and cured him. Deity is called as Pushparatheswarar / Poothereeswarar. Both the names convey the same meaning; Poo or Pushpam means flower and Ratham or Ther means chariot. Since the lingam was found in lotus, he got this name. Lotus is the flower that is offered to the god here. The temple is facing East direction and built in Dravidian style of architecture. The temple has 5-tiered Raja gopuram on the South side and dhwaja stambham is placed infront of the temple. Vinayakar, Dhakshinamoorthy, Lingothbavar, Brahma and Durgai are the niche idol around the sanctum walls. There is a shrine for Surya in the Artha mandapam. Interconnecting mandapam between mother shrine and sanctum was added at a later stage. Theertham of this temple is Surya pushkarini, situated near east side entrance.

A Chola king was returning after successfully waging a war on a kingdom in Andhra Pradesh. He camped at Cholavaram. He was a staunch Shiva devotee and went in search of lotus to perform his daily pooja. During his search he saw a pond full of lotuses. One of the flowers was taller, bigger and more beautiful than the rest. The king wanted this flower for the pooja and tried to reach the flower. As the king neared the flower it moved away and was elusive. After several futile attempts, the king was very angry and threw his sword at the flower. The sword broke into pieces. One of the pieces fell on a lingam which was in the pond. The pond turned red in no time because of the blood that was oozing from the lingam. This scar can still be seen on this Shiva Lingam. The king fainted there. His horse fled from the scene before fainting. Lord Shiva then appeared before the king and blessed him. The king apologized to the lord. Lord Shiva asked the king to build a temple for the lingam that was found in the pond.

Sanjana devi, the wife of Sun god is the daughter of Vishwakarma. Though she was happy with her husband, at one stage she felt that she couldn’t bear his heat any longer. So, she left him after leaving her duplicate in her place whom she created from her own shadow. When Sun god realized the truth, he prayed to lord Shiva at the Arunachaleswarar temple to unite him again with his wife. While circumambulating the shrine he saw a light which fell on him by way of blessings and then moved away. Intrigued, he followed the light till it reached the village of Gnayiru where it fell on a linga and vanished. Surya was pleased at the happening and for Shiva's (Lord Pushparatheswarar) blessings, after which Surya returned to his wife. Since the Sun god is said to have bathed in the pond, it became known as Surya theertham and there is also a Surya shrine in the temple & here is the story on why this place got the name Gnayiru Gramam. A Chola king was on a pilgrimage to Kasi and was passing through this village. He saw the beautiful lotus in the pond and as he tried to pluck the same he was blinded. He prayed to the lord that he would build a temple here on his way back from Kasi. Immediately, his eyesight was restored in one eye. As promised he came to the village on his way back. Lord Shiva appeared to the king and shone brightly on the lotus as Suryan. The king then built a temple as instructed by the lord and got back his eyesight in the other eye as well. Since then, this place is known as Gnayiru Gramam and came to be known as a Surya sthalam.

Pandyas and Vijayanagar kings are contributed this temple. Sage Agasthiyar, the author of Adityahadayam is believed to have stayed here and worshipped Lord Shiva. Adityahadayam is a sloka recited by Agasthiyar to Lord Rama. Birth place of Sangili Nachiyar, the wife of the Nayanmar Sundarar. The place of final resting of Shri Kanva Maharishi (Foster father of Shakunthala). The temple was 1000 years old and renovation work done in 2006, built by Chola kings.