The main deity of this temple is Lord Jalanatheeswarar. Here Lord is incarnation of Lord Vishnu and faces in East direction. 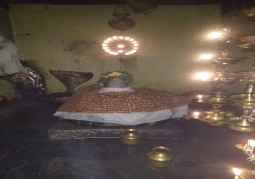 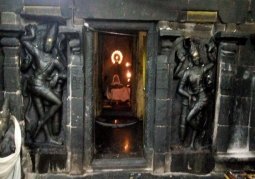 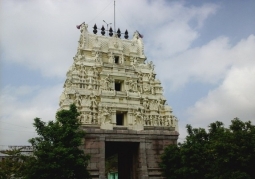 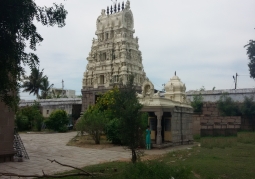 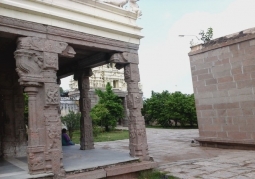 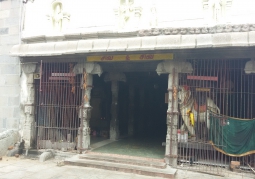 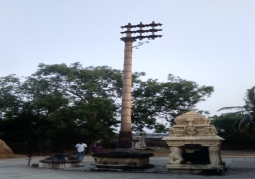 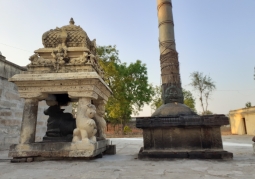 The main deity of this temple is Lord Jalanatheeswarar. Here Lord is incarnation of Lord Vishnu and faces in East direction.

The sage is believed to have performed abishekam to Lord Jalanatheeswarar with this water to complete his worship. He also named the lord as “Thiruvooral Easwarar”. The temple faces in west direction. Built in Dravidian architecture. The temple has a 3-tiers Rajagopuram was built in the year 1543 by Vijayanagara king Veera Prataba Sadasiva Maharayar. The temple has a Dhwaja Stambham. Another interesting feature of this temple is that instead of the Lingothbavar as Koshta Murthy behind the Shiva Lingam one can see Maha Vishnu in a sitting posture. Most of the idols in the koshta of this temple are slightly tilted to one side. There are lots of inscriptions on the walls, but nothing much could be grasped from them using our limited experience in reading inscriptions. The inscriptions on the inner walls have been whitewashed and the ones on the outer walls have weathered. Theertham (Holy water) here is Parvathi Theertham, Sathya Gangai and Kusasthalai river. The main shrine has the slightly big Shiva Linga named as Jalanatheeswarar. It is made up of sand. It is also believed that the Shiva lingam here is made of Navabashanam (Nine Poisons).

Sage Theerkadar was born to Sage Udhadhi the brother of Jupiter (Guru) and Mamathai. Theerkadar was well educated and became a scholar. One day he saw the divine cow Kamadenu near his hermitage. He requested Kamadenu to come with him and assist him in a yajna that he was about to conduct. Kamadenu said that she could not oblige him without the permission of Lord Indira. The sage tried to tie her but she cursed him to become an ordinary, blind man who would spend the rest of his life doing menial jobs (“sandalan” in Tamil). In turn the sage cursed Kamadenu to become an ordinary animal losing her divine powers. Sage Udhathi was saddened by the plight of his son. He came to this place on the advice of Maharishi Naradha and worshiped the Lord Jalanatheeswarar. Lord Shiva gave dharisanam to the sage and advised him to pray to Nandhi and requested him to bring water from the holy Ganges to this place. He further advised the sage to perform abishekam with that holy water. To carry out the lord’s wishes, Sage Udhathi installed a separate shiva lingam and a Nandhi near to the Jalanatheeswarar temple and started his penance. This Shivalingam is praised as Sri Gangadhareswarar and this temple is called Sri Gangadhareswarar temple. The Goddess of this temple is named as Sri Mohanavalli. It is believed that Nandhi was pleased with his penance and created a tank near this temple and filled it with water from the Ganges itself. He is believed to have channelled water from the Ganges through his mouth. Thereafter the sage is believed to have performed abishekam to Lord Jalanatheeswarar with this water to complete his worship. He also advised his son Theerkadar to take a dip in the water tank and pray to Lord Shiva. Thereafter Theerkadar is believed to have been relieved from Kamadenu’s curse. Another legend is that Goddess Parvathi returned to this place after having been insulted at her father Dakshan’s yagna. She is believed to have installed a lingam made of sand here. Once she was performing her penance, this region was inundated by flood water. In order to protect the lingam, Goddess Parvathi embraced it. This is evident from the markings that can still be seen on the idol. Since this Lingam is believed to have been embraced by Goddess Parvathi, it is not touched by human hands. Poojas are performed by the priests without touching it.

Demon Thakkan - One more legend is that King Sivathithan who ruled Thiruvural was troubled by demon Thakkan. The King prayed to Lord Shiva of this temple who instructed Goddess Kali to destroy the demon. Goddess Kali executed the orders of Lord Shiva. For this reason, there is a separate shrine for Goddess Kali at the border of this place. This shrine attracts a large number of devotees. It is believed that since Thakkan cried loudly before being killed by Goddess Kali, this place got the name Thakkan Olam – Thakkolam ("Olam" meaning crying loudly). Another reason why this place is named “Thakkolam” is that the sacred tree of this temple is also called “Thakkolam” (Pottu). An alternate version of the legend associated with demon Thakkan is that when he conducted a huge yagna, he invited all celestial gods except Lord Shiva. Lord Shiva wanted to teach him a lesson and instructed Veerabathrar to disrupt the yagna.Veerabathrar stopped the yagna and punished Thakkan by removing his head and installed a goat’s head in its place. Thakkan realised his mistake and prayed to Lord Shiva to pardon him. Lord Shiva advised him to go the river bank and asked him to invite Lords Vinayakar, Mahavishnu and Brahma to witness his prayers. On Thakkan’s request, Lords Vinayakar, Mahavishnu and Brahma came to witness his prayers. Since Thakkan’s head had been replaced with that of a goat, his prayer sounded like the bleating of a goat. These prayers are called “Chamakam” and each line ends with syllable “may”. Pleased with his prayers, Lord Shiva blessed him with salvation (moksham). This temple was built in between 876 A.D. To Pallavas,king Rajaraja Chola-II.

Kamadenu, the divine cow, is also believed to have worshipped the lord here by pouring milk on the lingam. She was relieved from Theerkadar’s curse and got back her original form and power. On knowing this, Lord Indiran is believed to have come to Thiruvooral and taken her back to the celestial world. It is believed that Sage Samvartha, Lords Mahavishnu, Indiran, Suryan, Chandran, Yama (lord of death), Saptha Kannikas (the seven divine virgins), Pandavas and Savitha Sivachariyar have also worshipped the Lord of this temple to seek absolution for their sins.