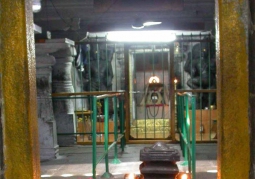 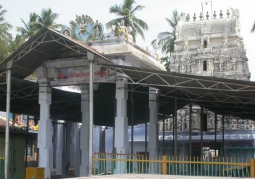 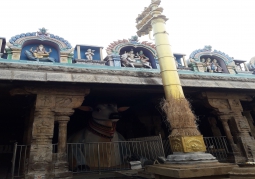 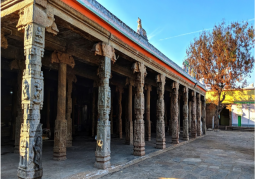 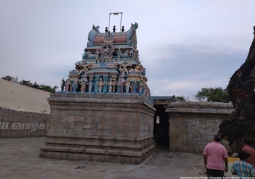 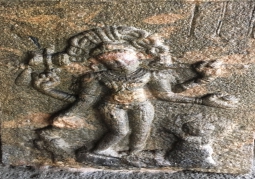 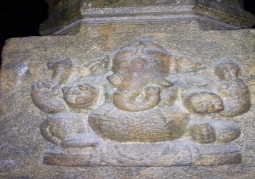 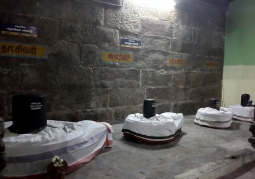 The temple deity was the family deity of Vallavarayan Vanthia Thevan (Hero of Ponniyin Selvan novel). Since this place was laid with Vilwam trees it used to be called Vilwaranyam and Vilwavanam, Shiva Lingam found among these trees so the god called as Vilwanatheswarar swamy. The temple is facing east with an entrance from south and was built in Dravidian style of architecture.

Vilwanatheswarar swamy temple has a 5 tier Rajagopuram and faces east direction. The inner Prakaram is entered through a 3 tiered Gopuram. A majestic Dhwajastambham stands in the temple courtyard. There are beautiful sculptures for the 27 Nakshatrams (constellation depicting the birth stars) on one of the towers (Vimanam). In addition, the stone idols and bronze idols of all the 63 Nayanmars are arranged in parallel in upper and lowers rows between inner prakaram and sanctum.The inner prakara around the sanctum has the idols of Brahmi, Kariya Manikka Perumal, Ganesh and Naga. The outer walls of the sanctum sanctorum has many stone inscriptions. The stone inscriptions in this temple reveal that this was an important pilgrimage centre in the past. We can find references of pilgrims using Thiruvalam as a resting place before journeying to other pilgrimages in southern states and as far off places as Banaras (Kasi) in Uttar Pradesh.

108 pillared Mandapam - Noorukaal mandap or the mandap with 108 pillars is the highlight of this temple. Deities in different forms and postures, dancing girls, soldiers, men fighting animals, saints, mythical animals and lot more are found in the form of sculptures on all these pillars. The legend of Nandhi fighting with the demon Kanjan is depicted in a sculpture in the hall (Sabha Mandapam) and also in the form of reliefs chiseled on the hall pillars.

Mukha Mandapam - In Mukha Mandapam, there is Nandi which faces in the same direction as the sanctum. Similarly, in the outer area near the Flagstaff and Bali peetha, a very big white colored stucco idol of Nandi is found. In front of that another Nandi (stone image) is located. They also face their backsides towards the sanctum. Thus, all these three Nandis facing in the opposite from their usual positions talk about the legend related to Nandi killing the Asura.

Nandi Mandapam - Nataraj and Sivakami, in the form of bronze idols, are found in this shrine, which is located near the Nandi Mandapam. Mouna Swamigal built the big stucco idol of Nandi. His stone idol is found on the true right side of this big Nandi. The mandapam where the Nandi idols and Swamiji's idol are located is bigger and has many interesting images on the pillars. Navagrahas are also located within this mandapam.

Gowri Teerth, the holy temple tank with a mandap in the middle (called as Neerazhi Mandapam) is located in the area between the two towers. Walls of the temple was built with Granite stone.

Legends - According to the legend, in ancient times this region was densely covered with Vilwa trees. It is believed that once, a few locals had noticed a cow pouring its milk on a particular ant-hill every day. After clearing that place, they found a Swayambu lingam and built a temple around it. It is said that this region was originally a vilwa forest.

Legend associated with this place is that when the temple priest used to bring water for Pooja/ Abishekam, he was being troubled by a demon (asura) called Kanjan. The priest complained to Lord Shiva about his troubles and on hearing his plea, Lord Shiva instructed Nandhi (his mount) to kill the demon. Nandhi executed the lord’s order and killed the demon. It is said that Nandhi tore the demon into eight pieces and these eight parts fell in eight different places – Lalapettai (skull), Seekarajapuram (head), Maveri (chest), Vadakal (right leg), Thenkal (left leg), Maniampattu (wrist), Kugayanallur (intestines), Narasingapuram (nerves) and Maruthampakkam (thorax). Later, in all these places Shiva temples were constructed. Seeking absolution for his sins, the demon Kanjan pleaded to Lord Shiva. The lord answered his pleas and his request for pardon and granted him “Mukthi”. The lord also blessed him by saying that wherever his blood had fallen, a Shiva lingam would appear. Even today one can see hundreds of such Shiva lingams on the nearby hill. It is also believed that if one digs anywhere on the hill, he can find a Shiva lingam. Since the lord instructed the Nandi to safeguard this temple from the demon, the Nandi idol at this temple is seen facing away from the lord and looking towards the nearby hill (Kanjangiri).

It is believed that Lord Ganesha and Lord Subramanya had a quarrel for a mango fruit offered by Sage Narada. A contest was conducted that whoever goes around the world first and comes back here would be offered the fruit. While Lord Subramanya went around the world, Lord Ganesha encircled his Parents and got the fruit as a token of appreciation. Valam in Tamil means circumambulation. This is the place where Lord Vinayaka established the truth that “world” means Father and Mother and “Father and Mother” mean world. He went around his Divine parents to show this truth. As he did the Valam here, the place came to known as Tiruvallam and changed as Tiruvallam. The famous competition between Vinayaka and Subramanya took place at Thiruvalam contrary to another version that states that the competition took place at Kailasam. ‘Thiru’ means ‘Sacred’ or ‘Holy’ while ‘Valam’ means ‘Circumambulation’. Here the Vinayakar is called “Kani Vangiya Vinayagar” (the lord who received the fruit).

Thirugnanasambandar (7th Century C.E.) has rendered thevaram Hymns for the lord here at Vallanadhar Thiruvallam.The name of Vallanadhar Thiruvallam is said to be mentioned as ‘Theekkali Vallam’ in one of the inscriptions. There are quite a few references of Rajendra Chola in the stone inscriptions. Arunagirinathar (15th Century C.E.) has rendered Thirupugazh Hymns for Lord Muruga here at "Vallanadhar Thiruvallam". Saint Sivananda Mouna Swamigal stayed in this temple for many years. People used to meet him to get cured of their illness. He had consecrated the temple with the funds collected from the public. Temple was built by Kings of Pallava and Chola dynasties during 7th Century.