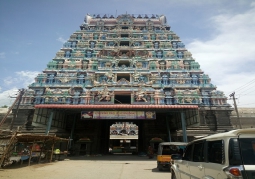 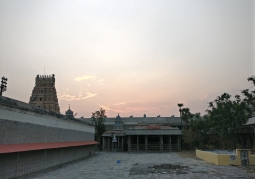 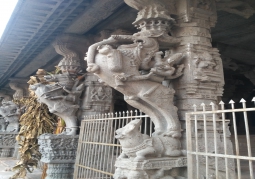 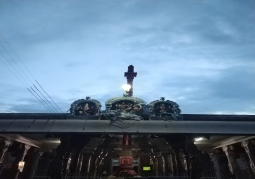 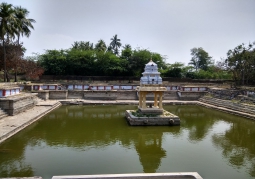 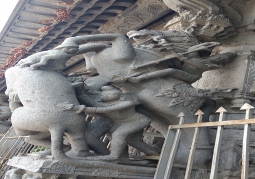 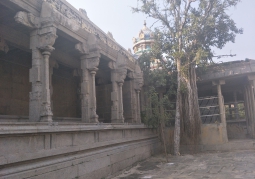 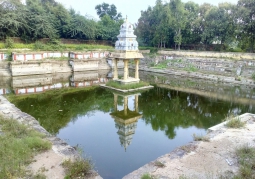 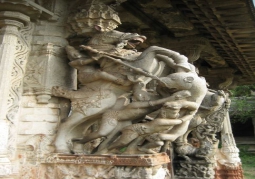 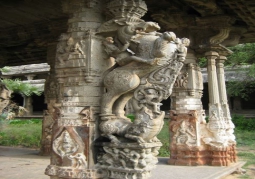 Lord Brahma was born as Shivasarma here in a priest family Siva Sharma offered prayers for Swarna Ganapathi who then approached Lord Siva to perform Abhishek. As he was small, he was not able to touch the head portion of Siva Linga. Lord Siva bent down to help Siva Sharma in performing Abhishek. Lord Siva is called by Marga Bandhu Eswar which means “One who guides us in the right way". Here temple faces East direction and was built in Dravidian style of architecture.

The majestic Rajagopuram is 7 tiered and 110 feet tall. There are Rajagopura entrances on the two sides of the temple, located at East and West sides. As a rare sight, there are two Dwajasthambams in this temple, one for the main shrine and another exclusive for the Amman shrine as well. The roof above the sanctum sanctorum is decorated with Rudraksha. There is a dance hall in the front of sanctum and two big & beautiful dwarapalakas welcoming the devotees. It is a Chola shrine as testified by the Gajabrishta (Elephant rear) vimanam that rises above the sanctum sanctorum. Siva-Margabandhu is accessed from a multi-pillared Vijayanagar style hall after which you come to a frontal pavilion.The walls of the temple are said to be historically renowned for their beauty and they are amazingly symmetrical.There are 5 praharams in the temple and the temple is famous for its huge and beautiful prahara walls. Miniature Rajagopurams are present on the temple wall itself. The height of the walls varies from 15 ft to 24 ft according to the inclination of the ground.

Inscriptions - A Tamil Inscription from Margabandeswarar Temple in Virinchipuram offers some respite for dowry, the socail curse that has vexed Brahman community during the reign Devaraya-II (reigned 1432–46), Vijayanagara emperor.Agreement against Dowry by Brahmanas of the kingdom of Padaividu. This inscription refers to the Brahmana Dharma (Sacred Law of Brahmans) and specific reference to the Brahmanas of the kingdom of Padaividu (town of Padavedu – previously known as Padaividu – now in the Polur Taluk,Thiruvannamalai district) including Karnataka, Tamil, Telugu and Lata (the old name of Gujarat) Brahmanas. An agreement, signed by the representatives of Brahmanas of the kingdom of Padaividu,vouch to conduct marriages in their families as mere ‘Kanyadhana.’ – the part of the marriage ceremony where the bride’s father only gives away the bride to the bridegroom”. Inscription inside the front gopuraM of the Virinchipuram Temple second inscription to the right- A stone inscription by its side has it that it was installed by Parvathi Ammal, the wife of Arcot overseer Munisami Maistry, in memory/as per the wishes of her sister Pappathi Ammal. The stone is dated to the month of Karthikai in Vikriti year but with no numbers given. The temple has rich sculptures and artistic pillars.

Bomma Nayakars, who built Vellore Jalagandeswarar temple, made several extensions to the temple including beautiful kalyana mandapa. The highlight of the temple is two Kalyana Mandapas located on either side of the outer enclosures. Both the mandapas are filled with beautifully carved pillars and sculptures.One can find various forms of Shiva, Vishnu and other Gods wonderfully engraved on pillars of these mandapas. Narasimha coming out of pillar, killing Hiranyakasipa, Vishnu with musical instruments, and other such wonderful figures can be found in these mandapas.There is long alankara mandapam running through the entire northern prahara wall.

The main theertham of the temple is Brahma Theertham located outside the temple. The Simha teertha, the tank with the lion faced sculpture located inside the temple complex is a nicely built. Temple was built with Polished granite and cement.

Lord Siva once emerged as a Cosmic pillar and challenged Lord Vishnu and Lord Brahma to find the begin and the end. Lord Vishnu in the form of a Boar dug deep into the Earth and told Siva that he could not make it. Lord Brahma in the form a Swan and set out to reach the top. Brahma with the support of Mogili Flower and Cow told Siva that he had reached the top. Angered by the false claim, Lord Siva cursed Brahma that there will not be any idols for him in the Earth. To get rid of this sin, Brahma took the birth as Brahmin and called by Siva Sharma, took the responsibilities after his father’s death. Siva Sharma offered prayers for Swarna Ganapathi who then approached Lord Siva to perform Abhishek. As he was small, he was not able to touch the head portion of Siva Linga. Lord Siva bent down to help Siva Sharma in performing Abhishek. Hence the deity in this temple is found sliding.

This temple was built in 13th Century by Cholas Kings and recent renovations of the temple are done in the early 19th early 20th century by Vijayanagar Kings.This is also the birth place of renowned Vedic scholar and Shiva devotee Sri Appaya Dikshithar. The Margabandhu Stotram, to be recited each time you set out, is a work of Appayya Dikshitar, the great 16th century Sanskrit scholar who was from Virinchipuram. A century before him, composer Arunagirinathar visited the shrine and dedicated a set of verses to Muruga here.

This temple disappeared during 17th C.E and discovered back in 1998

A perfect place to just relax and not much activity