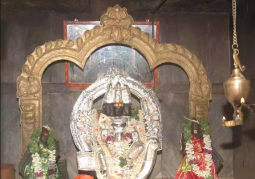 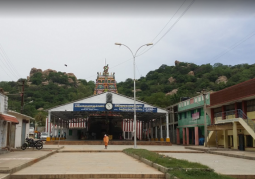 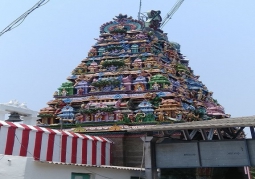 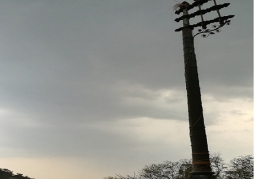 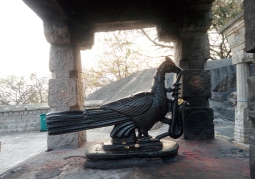 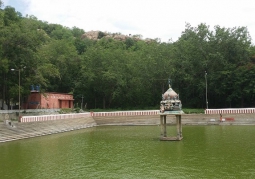 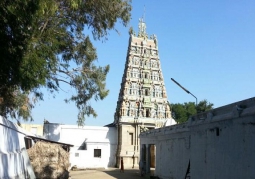 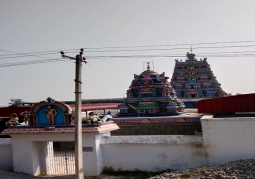 Valli (the daughter of Vishnu and Mahalakshmi in their earthly form of a sage and deer respectively) is said to have been discovered as a baby here at Murugan Vallimalai by the hunter Nambirajan, hence the name of the temple is called as Vallimalai Murugan temple. Murugan and Valli are believed to have met here at Murugan Vallimalai, facing East direction with Dravidian style of architecture. Vimana tower above the sanctum sanctorum here the gopuram is above the sanctum. Main Raja gopuram is five tier with five kalasas on it. The Kodimaram / Dwajasthamba is located at temple entrance. The garba griha of the temple is actually a cave formed between the two boulders. There is a square window to the east side of sanctum.

Nambirajan-father of Valli and the nine warriors (Nava Veeras) of Murugan are in the front mandapam. Inside the mandapam we see Selva Vinayakar, Arunagirinadhar, Veerabadrar, Nava Veerar, Kasi Viswanadhar, Visalakshi, Nandi and Chandeeswarar. Peacock in a small mandapam in front of the steps. There are mantapams helpfully to take rest frequently and proceed up slowly. There is a pond called the Saravana Poigai at the foot hills.

Lord Vishnu as a sage came to earth to perform penance. Mahalakshmi came before him in the form a deer. When lord looked at her, she (the deer) delivered a female child there surrounded by Valli plants. Nambirajan, the head of the hunter community saw the child, took her and named Valli as she was found around the Valli plants. When Valli grew, she took charge the Thinai fields to protect the crop from the birds. Murugan desired to have Valli in marriage. Their wedding was celebrated by Nambirajan at Tiruthani as per rules. Responding to the prayer of Nambirajan, Lord Murugan stayed (stays) in the hills to bless his devotees. According to a legend, the daughters of Lord Maha Vishnu, Valli and Devayani wanted a husband who will never get angry. In order to get their wish fulfilled, they prayed to Lord Murugan, who suddenly appeared before them. Both the daughters of Lord Maha Vishnu requested Lord Murugan to fulfil their wish. However, Lord Murugan said that in the next birth, when Devayani will be born to Indiran and Valli will be born to Vedas, he will marry them. In the next birth, when Surapadman, the asuran disturbed the Indiralogam, Lord Murugan came to destroy the asuran. After destroying Surapadman, as promised he married Devayani, the daughter of Indiran. 500-1000 years old, Madurai Nayak rulers and Pallava rulers. This is one of the temples visited by Arungirinadhar who sang Thirupugazh on Lord Murugan.