The main diety of this temple is Thiruvirkolanathar, who is an incarnation of Lord Shiva facing East direction. There is an injury scar on the head of Lord Shiva lingam. Lord Shiva here is a swayambu moorthy.

Sri Thiripurasundari is a other deity here consort of Lord Shiva. Mother’s shrine is right of that of lord facing East in a standing form. Sri Chakra is installed in the shrine. 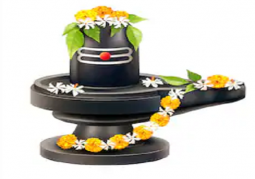 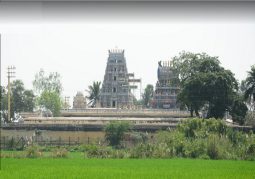 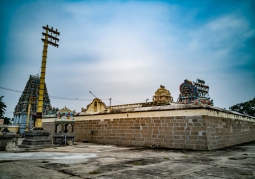 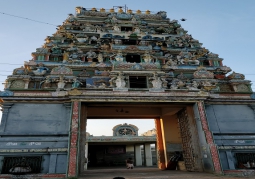 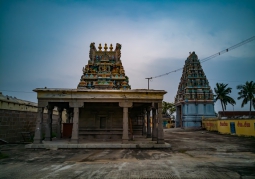 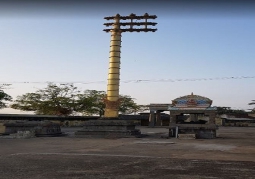 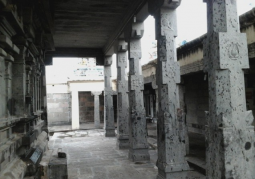 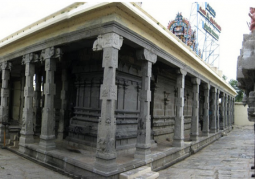 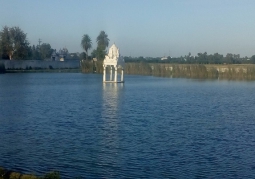 The main diety of this temple is Thiruvirkolanathar, who is an incarnation of Lord Shiva facing East direction. There is an injury scar on the head of Lord Shiva lingam. Lord Shiva here is a swayambu moorthy.

Sri Thiripurasundari is a other deity here consort of Lord Shiva. Mother’s shrine is right of that of lord facing East in a standing form. Sri Chakra is installed in the shrine.

There are several tales related to the Tripura Samhara and temples associated with it. Tarakaksha, Kamalaksha and Vidyunmali, were three Asuras who, through the boon received from Lord Brahma, moved about in their aerial cities made of precious metals and tortured the humans and devas alike. The devas appealed to Lord Shiva who set out to strike them down with a single arrow. With the earth as chariot, and the Sun and Moon as wheels, Lord Brahma as the charioteer, Mount Meru as the bow, the serpent Vasuki as the string and Lord Vishnu as the arrow, the lord set out for the samhara. In his haste, he forgot to worship Lord Ganesha. It is a requirement to worship Lord Ganesha before the beginning of any act and Lord Shiva cannot be exempted because he was Ganesha's father. If Gods do not follow the rules, who will? In order to establish the protocol, Lord Ganesha looked up and this broke the bearing of the chariot. The place where this is said to have happened is called Achu (Bearing)+Iru (break) pakkam-Achirupakkam. When the axle of his rath broke, the chariot lost control and the axle fell at koovam. Lord Shiva is said to have stood up and gained his balance by placing his bow on the ground. Hence, he is also named Tiruvirkolanathar. The place is named Thiruvirkolam. During the Chithirai Brahmmotsavam festival, lord appears with the bow. This darshan is considered very important in the temple. Water sprang from the point where the bow hit the ground, and flowed to anoint the holy feet of Lord Shiva. This water then gushed forth as a river and came to be known as koovam (which is an adaptation of the word koovaram which means axle and / or Koobam which means water source. Today it is generally referred to as koovam. As the lord took on a march against Tripuranthaka demons, he also bears the name Tripuranthaka and mother Tripuranthaki. The temple is facing in East direction.

There is a 5-tier Raja gopuram facing South direction and two dhwaja stambhams here. Goddess shrine has a separate flag post. The vimana (roof tower) of the sanctum sanctorum is designed in a special way that is exclusive to Pallava architecture, the Gaja Brishtam, that looks like the rear of an elephant (Gaja - Elephant, Brishtam - Rear). The demons, Tharakatchan and Vidyunmali have become the gate keepers (Dhwarapalakas) of the sanctum sanctorum. The shrine where Lord Shiva performed the “Raksha dance” can be seen near the entrance of the sanctum sanctorum.

The wall surrounding the sanctum sanctorum has the Goshtam idols of Ganesha, Dakshinamurthy, Annamalaiyar, Brahma, Durga and Chandikeswarar. All these bas relief images are very attractive. Several rulers have left their inscriptions at the temple. During the rule of the Cholas, Koovam was known as Madurantakanallur and subsequently as Tyagasamudranallur. An inscription of Rajendra-II, 1057 A.D., speaks about sale of land for developing a feeder canal to the Koovam tank, which had then been called Tribhuvanamadevi Pereri. An inscription of Kulothunga-I, 1112 A.D. speaks about the lifting of fishing and paddy taxes to fund the repair of the Tribhuvanamadevi Pereri. There have been grants provided by Rajaraja-II, Vijayaganda Gopala Deva and Konerinmaikondan for conducting festivals at the temple. The Ardha mandapa in the main shrine of Shiva has few idols such as Surya, Nalvar, etc., very beautiful utsava (Bronze) idols. Agni theertham, located at front of the temple, Another interesting aspect of this tank is that it never goes dry.

Tharka Madha - At the request of sages Munjikesar and Karkodar, Lord Shiva played his oordhva thandavam a dance with fast and furious movements and won kali in the competition. Kali was too angry to accept her defeat. Lord Shiva told kali that he would be playing a pleasing dance raksha dance in Thiruvirkolam when she can have his darshan and shed her anger. Kali had the pleasing darshan of the lord on the occasion and became merciful. Kali is gracing the devotees in the name of Tharka Madha in a separate shrine a little away from the temple. kali assumed the name of tharka madha as she contested against Lord Shiva in the dance competition. Tharka in Sanskrit means debate.

The Tale of Dharmaseelan - In koovam, there lived a Brahmin called Dharmaseelan. He and his wife were staunch devotees of Lord Tripuranthaka and took immense pleasure in feeding the Shivacharyas who came to their door step. Over time, Dharmaseelan had spent all his earnings, feeding the Shivacharyas and had to resort to selling all that he had in order to continue to do so. At one point, he sold even his wife's mangalsutra when he had nothing else worth selling. Once the money received out of the sale was spent, Dharmaseelan and his wife had absolutely nothing, to even feed themselves. For eight days, they did not have a morsel of food to eat. They still walked weakly to the temple to worship Lord Tripuranthaka and looked out for Shivacharyas. On the ninth day, a Sivacharya walked up to the doorstep of Dharmaseelan, asking for food. Dharmaseelan did not know what to do. He ran through the streets of Koovam, seeking alms and was able to get two measures of rice. He ran back home, asking his wife to make porridge with the rice. The Sivacharya drank the porridge to his heart's content. After he left, Dharmaseelan and his wife sat down to drink the remaining porridge. At that moment, there was another Sivacharya at the door. Dharmaseelan stood up to receive the mendicant, but due to hunger and fatigue, fell down. His wife cried at his plight. Dharmaseelan soon dragged himself up, and gave the remaining porridge to the visitor. At that moment, Lord Tripuranthaka appeared before them, and told them that every day a pot full of rice will appear in his shrine for use by Dharmaseelan for his noble deeds.

It is said that when Lord Shiva was performing penance here, sound of frogs was a hindrance to penance, hence there are no frogs in the Agni theertha here. This temple was built in 7th century A.D. by Chola Kings.