Lord Swayambhu Murugan idol faces East direction, he is not holding the Vel Weapon which is closely associated with him, but Vajra Hastam in his right hand that would produce a sound as thunder. His left hand is on the hip representing wisdom. Only during dressings (Alankara) Vel and Cock flag are placed with him according to tradition.

Valli and Deivayanai's are consorts of Lord Swayambhu Murugan. 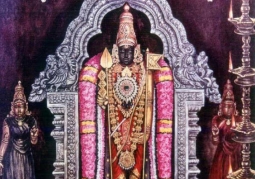 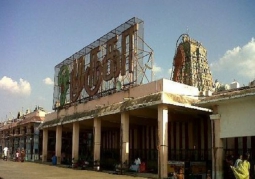 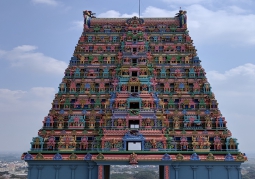 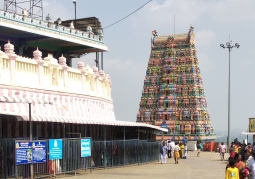 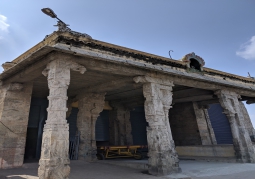 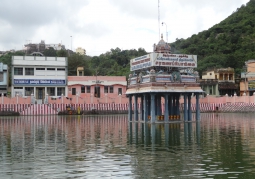 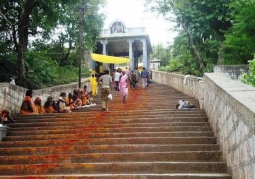 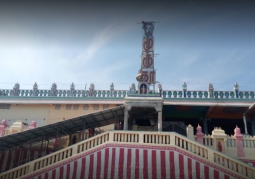 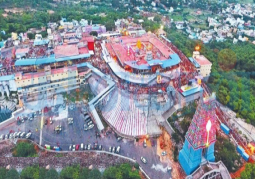 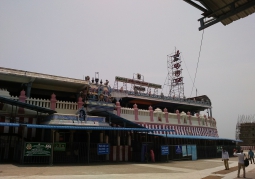 Lord Swayambhu Murugan idol faces East direction, he is not holding the Vel Weapon which is closely associated with him, but Vajra Hastam in his right hand that would produce a sound as thunder. His left hand is on the hip representing wisdom. Only during dressings (Alankara) Vel and Cock flag are placed with him according to tradition.

Valli and Deivayanai's are consorts of Lord Swayambhu Murugan.

Arulmigu Subramanya Swamy koil is facing East and is built in Dravidian style of architecture.

A Nine Tier Raja gopuram constructed recently at the East entrance. There is a Dhwaja Stambham in front of the temple. The Vimana (roof tower) above the sanctum sanctorum has six petals. At the entrance to the sanctum, there are statues of two Dwarapalakas, known as Veeravaahu and Veeramahendra.

Temple Walls - It has 4 Prakarams. Sri Aadhi Balasubramania graces on the wall behind the sanctum sanctorum as a child. He was the lord with Akshara mala and a Aamandala (a small pot with a handle to carry water usually held by gods and sages) before his wedding with Valli. It is known from the inscriptions on the temple walls that this temple was built by Pallava Kings during 9th inscription-10th century A.D. Later this temple was renovated by the Chola Kings. The Shrine of the procession deity is in a mandap made of One lakh Rudrakshas.

A Flight of five steps from the second Praharam called the panchakshara padigal, leads to the first Praharam. Crossing the sthapana mandapam and artha mandapam, one reaches the main garba graham of the thanigesa peruman.

Koneru - There are five theerthams or divine water sources, in and around the temple. They are :

Saravanapoikai teertham : The sacred tanks of the shrines of the lord are all known as "Saravanapoikai" (sacred pond of the reedy marsh where Lord Kartikeya was born). The tank at Tiruttani, which (unlike in other places) is at the very foot of the hill, is particularly renowned for its sacred water (teertham) having curative effect for ailments both bodily and mental,as it is rich in minerals such as sulfur, iron, etc. A bath in this holy tank refreshes the devotee and makes him hale and healthy.

Saptarishi teertham : At the lovely garden on the south side of this sacred hill amidst a thick cluster of shady trees and seven cool sprints, the Seven Rishis (who today form the Great Bear stellar constellation) are said to have worshipped Lord Muruga (Lord Subramanya) and the Sapta Kannikas (Seven Virgins) enshrined at this place in a tiny temple.

Once Narada, on his visit to Kailasa, presented Twinkle Mango to Siva Paravathi and requested them not to cut this mango as it may lose it’s spiritual powers. As the fruit can’t be cut, Lord Siva and Goddess Parvathi can’t have this fruit so they decided to offer this to one of their sons, Murugan and Ganesha, who goes around the world thrice. Murugan went on his vehicle Peacock, Ganesha was confused as his vehicle is Rat and will move slowly. Murugan reached kailasa to collect Mango, after completing the circles, to his surprise it is already offered to Ganesha. Knowing the answer from Narada, that Ganesha circled thrice to Siva Parvati, who were their world, Murugan felt that he had been cheated and left Kailasa and started living on the earth at Palani hills and then moved to Tiruttani hills for peace.

It is said that, Lord Murugan wanted to marry Srivalli, daughter of the King Nambiranjan. He sought help from Ganesha, who then frightened Srivalli by becoming an wild Elephant. Murugan saved her from the Elephant and expressed his wish to marry, Srivalli expressed her willingness and they both got married here.It is said that Indra (god for geaven) offered sandalwood stone as part of marriage gift. Till today, sandalwood paste applied to the lord will be prepared on this stone.

Another interesting story attached with this temple, Lord Murugan who got married to devasena, daughter of Indra (god for heaven), received Iravath as a marriage gift. As Irvath started moving, Murugan noticed that Indra’s wealth started decreasing. Noticing this, Murugan decided to return his gift, for which Indra didn’t not accept. Indra then requested Murugan, that his wealth will be retained, if the Iravath face towards him (Indra). That is the reason, why the Elephant image here at this temple facing towards East. During the battle with Tarakasura, Lord Murugan received the injury from the discus thrown by the him. Even now we can see the hollow region at the main idol’s chest. It is also said that, Lord Murugan gifted this discus to Lord Vishnu.

In Treta yuga, Lord Rama, after putting an end to Ravana, worshipped Lord Siva at Rameswaram, at whose request Rama came to Tiruttani and found perfect peace of mind by worshipping our Lord subrahmanya here. In Dwapara Yuga, Arjuna got the blessings of Lord Murugan here by offering prayers to him on his way to the south for Teertha Yatra (pilgrimage to take sacred immersion). Lord vishnu prayed to our lord at this place and got back his powerful chakra (sacred wheel), Shanku (sacred conch), which were forcibly seized from him by Tarakasura, brother of Soorapadma.

Temple built from 10th century by Pallava Kings and recent renovation is 2017. So many kings contributed for this temple like Chola kings,Vijayanagar Rulers, local Chieftains and Zamindars. Hymns have been rendered by Arunagirinadhar (5th century C.E.), Ramalinga Swamigal and Muthuswamy Dikshidhar. Legend dates back to Mahabharatha times, when Pandavas exiled from their empire. Arjuna during his South India Journey, offered prayers to Lord Murugan here and received his blessings. Once Lord Brahma got imprisoned by the lord as he could not explain the meaning of 'Pranava' mantra. He pleased the lord by creating a holy spring near the temple. Indra planted the rare plant called as 'Karunkuvalai' near the pool Indrasonai adjoining the temple. The plant used to give just three flowers a day, Indira used to perform pooja to the lord thrice a day with these flowers. He got back his precious wealth which he had lost to the demons.