Goddess Padmavathi is the main deity of the Tiruchanur temple. Goddess Padmavathi is an incarnation of Goddess Lakshmi. In this temple Goddess is facing East direction. Godesses Padmavati Devi is seated in 'Padmasana', holding a Lotus in both of her upper hands. Her lower hands are in poses of 'Abhaya', fearlessness, and 'Varada', benediction.

Another idols of temple courtyard lord Suryanarayana, Sri Krishna Swamy, Sri Sundararajaswamy. Lord Suryanarayana deity of this temple is believed to installed by Lord Venkateswara. It is traditional to first worship Sri Krishna and then to take darshan of Sri Padmavati. 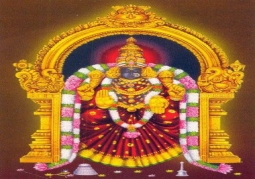 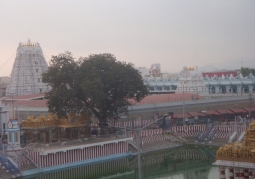 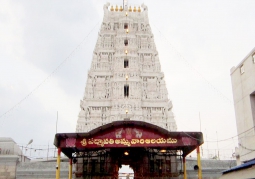 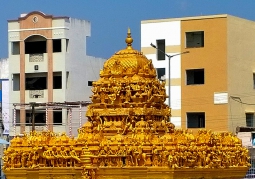 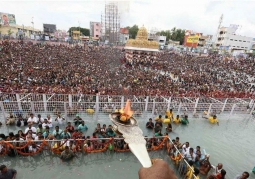 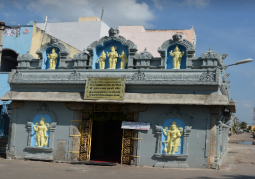 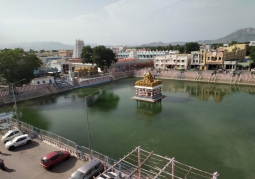 Goddess Padmavathi is the main deity of the Tiruchanur temple. Goddess Padmavathi is an incarnation of Goddess Lakshmi. In this temple Goddess is facing East direction. Godesses Padmavati Devi is seated in 'Padmasana', holding a Lotus in both of her upper hands. Her lower hands are in poses of 'Abhaya', fearlessness, and 'Varada', benediction.

Another idols of temple courtyard lord Suryanarayana, Sri Krishna Swamy, Sri Sundararajaswamy. Lord Suryanarayana deity of this temple is believed to installed by Lord Venkateswara. It is traditional to first worship Sri Krishna and then to take darshan of Sri Padmavati.

Dwajasthambham - The Gaja vahanam is embossed on the bottom and Shanku Chakras facing South and Goddess Padmavati facing North on Dwajastambha. The celestial Gaja flag on the temple mast flies on this pillar during the annual brahmotsavams and is lowered after the event.

Shanti Nilayam - A Seven kalasha with Gold cover rests on the Gopuram above the sanctum of Goddess Padmavati and is called Shanti Nilayam, facing the Tirumala hill shrine of Sri Venkateswara Swamy. It also accommodates a sparkling idol of Vimana Lakshmi as well akin to Ananda Nilaya Vimana Venkateswara Swamy in Tirumala temple.

The walls of the temple, ceilings and dome are intricately carved with stone word. An inscription in the Padmavati temple tells you in detail about the history of Tiruchanur. Originally there was a temple in Tiruchanur that was dedicated to Lord Venkateshwara. It was difficult for the priests to perform all the religious rituals because of space shortage. So they decided to carry out the activities elsewhere and only two important ceremonies were performed here. Later even this became difficult and so the place of worship was shifted. The place eventually lost all its significance.

Ashirwada Mandapam - This is a 16-pillared mandapam on a 4 feet high platform. Now it is seat of Bhajantri mela and also a platform for VIPs to get blessings and Prasada from archakas.

Dwajastambha Mandapam - It is a unique architectural marvel with 36 pillars in six rows with Bangaru Balipeetham. After serving Nivedana three times to Goddess Padmavati, Shraddhannam is served to Bhutaganas on the balipeetham.

Kalyanotsava Mandapam - To the south of Dwajastambha mandapam and in front of Sri Sundararaja Swamy temple, Kalyanotsavam is performed for Goddess Padmavati and Lord Venkateswara.

Mukha Mandapam - A four pillared mandapam on a high platform and covered by grill opposite to main temple is where Asthanam and other rituals are conducted.

Antharala Mandapam - After Archana mandapam, the Antaralam mandapam which is guarded by Vanamalini and Balakini at the door like Jaya and Vijaya in Tirumala.

Pushkarini - Temple tank known as Padmasarovaram, it is believed that Goddess Padmavathi manifested in this tank in Golden Lotus flower (Padmam) on ‘Sukla Paksha Panchami’ day in the Kartheeka masam.

According to a legend, Pundarika, a Brahmin who dedicated himself to the religion and followed the duties as per the shastras, couldn’t have a son till he was 50 years old. When his son was born, he named him Madhava, whom he raised with utmost care, teaching him intricacies of religion and spirituality. Madhava was then married to an equally religious woman, but he got deviated and went with another woman. After her death, unable to bear his loss, he wandered around and eventually joined a group of pilgrims on their way to Tirumala. As he took bath in the holy waters of Sudarshana Lake, and climbed the hills, his sins were washed. It was here that he heard a celestial instruction to bathe in Swami Pushkarini and seek Lord Varaha Swamy blessings. Later, Madhava was born again as Akasharaja as a son of King Mitravarman of Thondamandalam. However, even after years of his marriage to Dharanidevi, they didn’t have any children. In order to have kids, Akasharaja decided to perform a yagna. When the ground was being ploughed for the same purpose, Akasharaja and his wife Dharanidevi found a child on a lotus flower with thousand petals. This child was named Padmavati, in whose search Lord Venkateshwara down to earth. Eventually Lord Srinivasa and Goddess Padmavathi were married.

According to another legend associated with Godesses Padmavathi, Maharishi Bhrigu came to meet Lord Vishnu at Vaikuntam. However, when he entered Lord was asleep, which angered him as he took it as an insult owing to which he kicked the Lord on his chest, which awakened the Lord. Lord Vishnu, instead of getting angry, paid his sincere homage to the sage. Goddess Lakshmi, who was witnessing all this, couldn’t fathom the insult Lord Vishnu in the hands of Maharishi. Owing to this, she went to Patalokam, in search of atonement on the banks of Swarnamukhi River. Later after 12 years in penance, on the 13th year, she emerged as Sri Padmavati on a Golden Lotus on the auspicious day of Panchami in the month of Karthika, aligned with the arrival Uttarashadha Nakshatra. By this time, Lord Vishnu, in the search of Goddess Lakshmi, had come down to earth. As Lord Venkateswara he later married Goddess Padmavathi.

During Chola and Yadava Dynasitles : To the west of Thiruchanur (the present Yogi Mallavaram) the Cholas built a Sivalayam i.e. the present Sri Parasareswara Swamy Temple. The Cholas power came to an end in the middle of 13th Century A.D. when Jatavarma Sundera Pandya occupied Tondamandalam. Later the Yadava dynasty came to power and controlled the place of Tiruchanur. During their period they built Sri Krishna Swamy Temple in Tiruchanur.

During Vijayanagar Period :  Vijąyanagara kingdom was founded in the year 1336 A.D. and soon Tiruchanur came under their rule. During the Vijayanagara Rule the temples of Tirumala and Tiruchanur reached the glory and became famous attractions. The Vijayanagara Kings constructed Sri Padmavathi Devi Temple Mukhamandapam. Afterwards the power came to the hands of Britishers. The Britishers handed over the temple administration of Tirumala to the Hathiramji Mutt. The Head of the Hathiramji Mutt took the charge on 16 July 1843 and the Mutt heads continued the administration till 1933. During their period they developed Thiruchanur temple. At present the Thiruchanur is under the administrative control of Tirumala Tirupati Devasthanams. Recently temple Pushkarini was renovated in 2013.